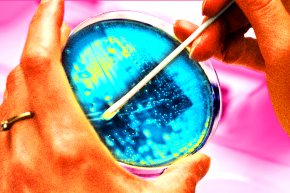 Tracing How A Brand New Hospital Slowly Gets Colonized By Germs

Over the course of a year, scientists sampled the microbes in a newly-opened facility in Chicago

It is counterintuitive that some diseases thrive in hospitals, but that’s where, every year, hundreds of thousands of patients get hospital-acquired infections and, in 2011, 75,000 people died as a result.

As hospitals work to better protect patients from germs that travel easily among the weak and already-ill, researchers saw a golden opportunity to study the problem in a brand new hospital in Chicago.

The Hospital Microbiome Project allowed researchers to analyze how germs spread over the course of a year, as the facility went from clean and sterile to full of patients and pathogens. Over 14 months they collected more than 6,500 samples from the floors, faucets, and bedrails, from the hands and noses of patients and nurses themselves, and from computer keyboards to the pagers used by staff. From these samples, scientists analyzed all the microbes found and how they changed over time in response to varying hospital environment and patient conditions.

“The specific aim is to determine the influence of population demographics, how the demographic interfaces with a space, and the building materials used to create that space, on the community succession, and rate of colonization by potential pathogens,” the project website reads.

Some of their findings, published Wednesday in the journal Science Translational Medicine, are not so surprising. After the hospital opened, bacteria found on human skin became much more common. The types of bacteria on the handrails next to patient beds resembled those on the patients’ hands themselves.

Other results were less expected. When a patient first arrives at the hospital, her microbiome is influenced by the microbes in the room, but after a day, the room microbiome more closely resembled that of the patient. During the summer, when it was more humid, all the surfaces had more similar bacterial populations. The staffers themselves also swapped microbes more frequently when the air was more humid. Patients on oral antibiotics had virtually no change to their skin microbes. And when patients stayed in the hospital for a long time, microbes that could potentially become pathogenic mutated more quickly and acquired genes that made them more likely to be resistant to antibiotics.

The study provides researchers with a basic understanding of how bacterial communities function and change within hospitals. But it didn’t show how specific disease-causing pathogens can infect patients. That question is particularly important as antibiotic-resistant microbes become more common— an estimated 2 million people are infected every year, and that number is expected to grow, especially in hospitals. The findings concerning microbial mutations over long-term stays is particularly concerning and requires more study, the researchers note.

The conclusions of this study provide a good jumping off point for future efforts to understand how diseases are transmitted within hospitals, said Jack Gilbert, director of the Microbiome Center at the University of Chicago and one of the study authors, in a press release.