When fighting celebrity quackery is your job

This weekend, for an introductory price of $500 and a ticket to Los Angeles, you too can unlock the secrets to a fruitful, healthy life, Hollywood-style. That’s because Goop, the much-mocked modern lifestyle brand founded by Gwyneth Paltrow, is hosting its first-ever health and wellness summit — the grammatically challenged “In goop Health.”

For nine glorious hours, you can have healing crystals picked out for you by the resident Goop shaman, take in a luxurious sound bath, or just hook yourself up to a refreshing post-hangover IV drip. You can also listen to the wise words of celeb scion Nicole Richie, spiritual nutritionist Habib Sadeghi, and, of course, the new queen of woo herself, Gwyneth Paltrow.

Unfortunately, Timothy Caulfield, a lawyer and health policy researcher at the University of Alberta, won’t get to enjoy the festivities, at least without paying the public admission price. But it wasn’t for a lack of effort. He tried to score an invite from the company and even started a hashtag on Twitter to convince @GwynethPaltrow personally. “#InviteTim didn’t get much traction, haha,” he told Vocativ.

Though in Goop’s defense, it’s not like Caulfield’s exactly their biggest fan.

“I’ve called it the Woodstock of pseudoscience, only Woodstock was free,” he said. “I find the offerings so devoid of science that the whole thing looks like satire.”

Caulfield is part of a small but dedicated group of academics, doctors, and scientists who have become a lot more outspoken about the sort of health and science claims regularly made on Goop’s website and elsewhere, especially on social media. Caulfield even went so far to release a book calling out Paltrow and like-minded celebs in 2015, titled “Is Gwyneth Paltrow Wrong About Everything?: When Celebrity Culture and Science Clash.” (Spoiler: she is)

Another prominent face of the anti-Goop brigade is Jen Gunter, a gynecologist, blogger, and writer who considers herself an evidence-based Wonder Woman, “wielding the lasso of truth.” In January, Gunter went on the warpath against Goop’s line of vaginal jade eggs that promised to strengthen pelvic muscles, heighten female energy, and keep one’s sex life smoldering. Two years earlier, she blasted the Goop-led trend of vaginal steaming. The most common windmill Gunter tilts at, she told Vocativ, is in pleading with people to “leave the vagina alone.”

Charlatans, quacks, and snake-oil salesmen have obviously been around forever, but the celeb-infused brand of chicanery that Goop personifies has become a prominent source of irritation for those like Gunter and Caulfield. 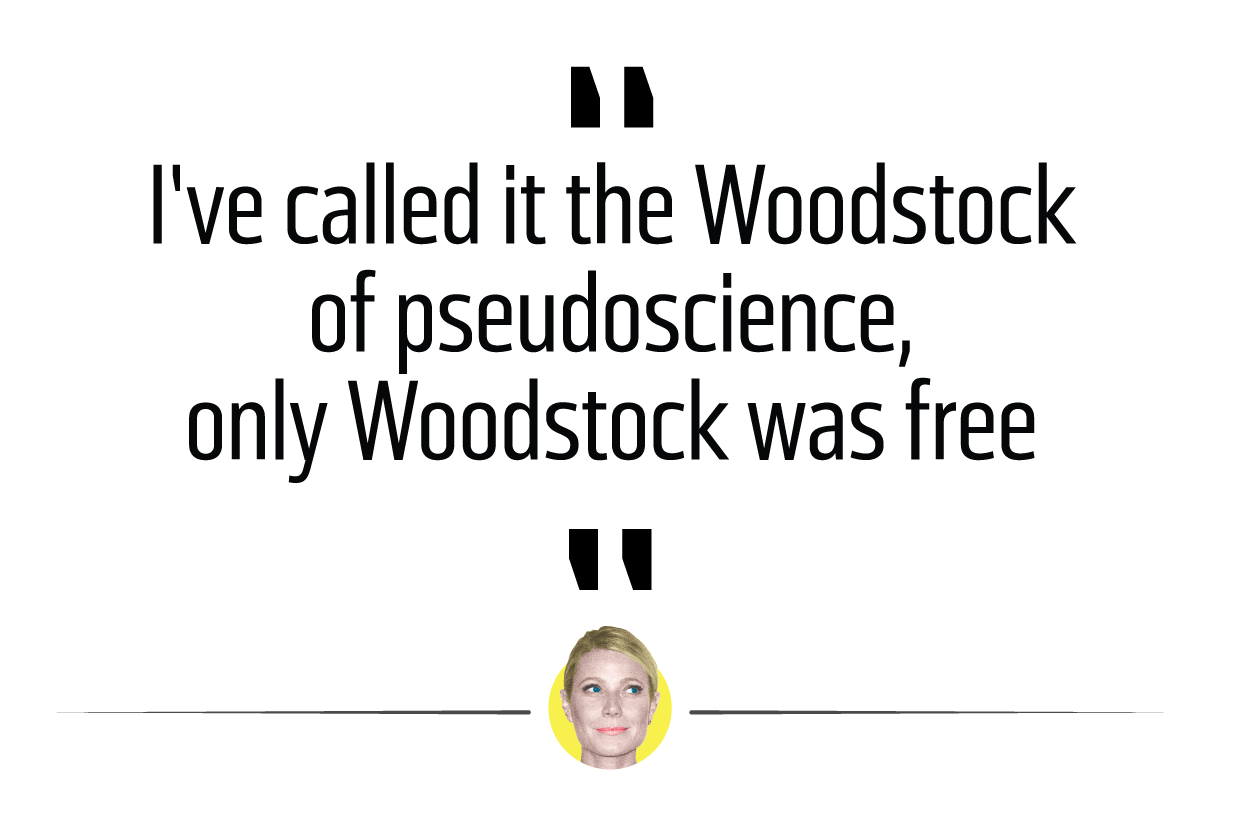 “Fear of everyday life, fear of toxins, fear of the unknown. It’s a very old playbook they’re using, just being repackaged very effectively,” Gunter said. “They wrap it up in an expensive ribbon.”

When they began their respective careers, neither expected to be one day sending off incredulous tweets and penning takedowns about the latest bit of bad health advice or crank medicine, whether it’s Goop praising the virtues of at-home homeopathy or the remnants of a wasp’s nest being sold on Etsy to dry up vaginas.

Is it wrong for me to imagine the snap of the pencil each time a @goop editor gets a call from a reporter about one of my posts?

“It’s sort of been a personal evolution,” Caulfield said. “I started out doing health and science policy. And while doing that, it just became increasingly apparent that pop culture is having a huge impact on how people think about health issues.”

Gunter, who has practiced medicine for 25 years, started her crusade against bad science six years ago because of what she noticed was missing on the internet. Many of her early posts focused on debunking the vaccination myths she frequently encountered while raising her children, who were born prematurely and particularly vulnerable to infections.

“I was tired of people getting bad information, myself included,” she said. Practicing in Northern California, she had also grown weary of having hippie patients constantly bring up bunk medical information, often of the celebrity-endorsed variety. “It’s hard to have those same conversations day in and day out, and I thought if I could get more of that accurate information out there beforehand, then that’d be good for everyone.”

Nowadays, she gets often recognized by her patients for her crusading.

“I had patients tell me they were in bars, screaming ‘That’s my gynecologist!’,” she said of the time she went on CNN to mock the bizarre letter crafted by President Donald Trump’s personal physician during his campaign last year. And elsewhere, she added, many of her physician friends shower her with praise. “They’re all like, ‘Yay! Thank you for telling people not to eat their placenta!'” (Goop has yet to endorse placenta eating, but other famous moms like January Jones and Kim Kardashian love it.) 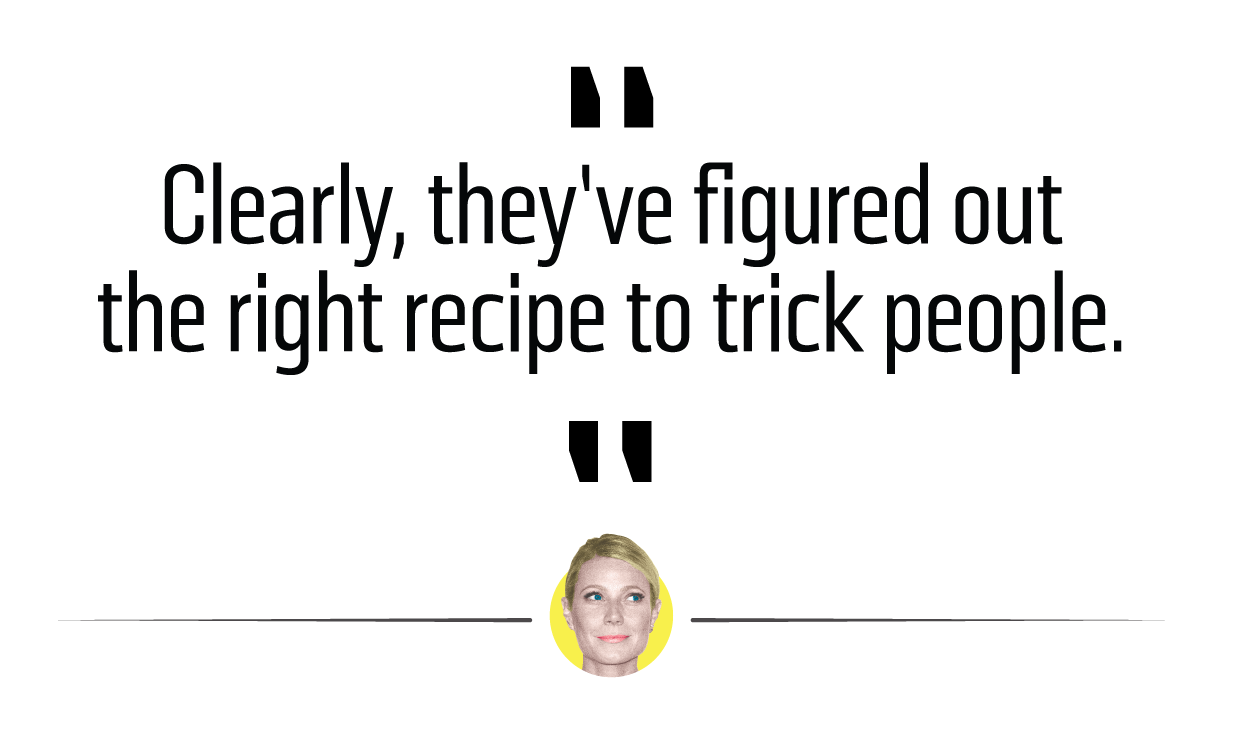 Caulfield, meanwhile, enjoys that his book has given him a way to reach out to the public. “It let me talk about science on morning shows, on talk radio. And in that sense, it’s been the most successful,” he said. “It really has provided me the chance to engage different communities that perhaps aren’t talking about the role of science.” And he believes that his fellow academics are becoming a lot more willing to do the same.

“I absolutely notice this very constructive change that universities, research institutions, and scientists are recognizing how important public engagement is,” he said. “If we’re not trying to create a conversation about these science-based issues, then celebrities are going to own that space. They’re not going away, social media’s not going away, so the science-based community needs to be part of that conversation.”

That’s not to say that being a debunker is a lucrative hobby.

“I’m not the one with a New York Times bestseller talking about toxins,” Gunter noted, referencing more than one author to have graced the pages of Goop, including the “Medical Medium,” Anthony William, and upcoming In goop Health speaker, Amy Myers. And while she asks to be paid for her freelance writing outside of the blog, she laughs at the idea anyone could think “you can get rich off doing that.” Gunter doesn’t even take money or gifts from the pharmaceutical industry, as just about half of all doctors do.

Caulfield similarly finds it ridiculous when critics paint him as a stooge of “Big Pharma,” hoping to convince people to gorge themselves on expensive pills for the rest of their lives instead of trying out the latest natural cleanse. “I’m a huge advocate of eating healthy, getting exercise, and all those preventative strategies,” he said.

And for all the positives that come with being quackbusters, there is a certain fatigue that sets in.

“Sometimes you wonder why the hell you’re doing this. Or when you get these incredibly angry responses, particularly when they attack you personally. You think, ‘Why am I bothering? I don’t need this’,” said Caulfield. 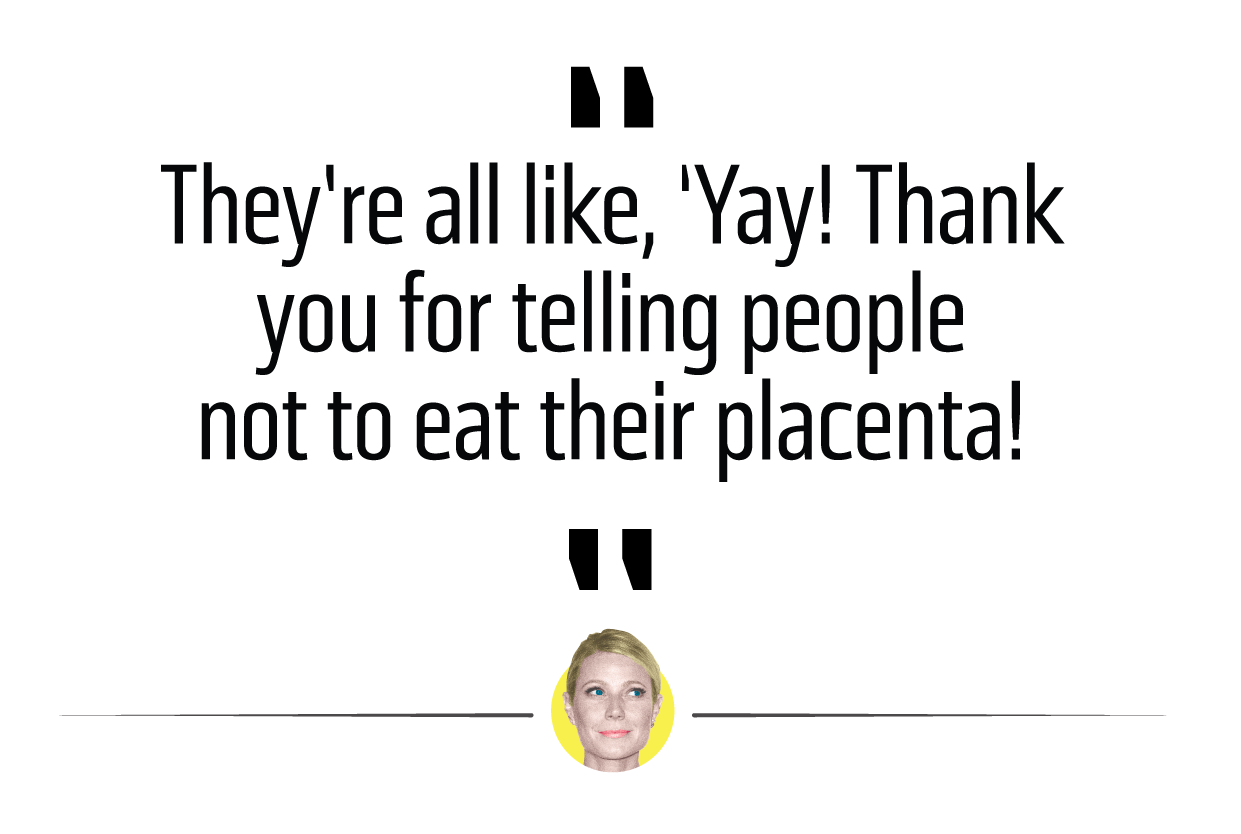 And Gunter is disheartened by Goop’s continued success, which began as a small weekly newsletter and is now a nine-year-old multi-faceted business. Its website, despite only posting a few articles a week along with the newsletter, courts a million unique visitors a month, according to a recent report. The company also obtained $10 million in venture capital financing last August. And along with its line of fashion, beauty and fragrance products, Goop is also now selling prepackaged vitamin regimens and other alternative health aids directly to readers and subscribers.

“The fact that Goop is now branching out into a print magazine and they’re having a health conference — ” she said, referencing the announced collaboration with Condé Nast to put a quarterly print publication starting this September — “clearly, they’ve figured out the right recipe to trick people.”

Amazingly, Paltrow even seemed to confirm her website’s questionable editorial choices, telling late night host Jimmy Kimmel this week that as Goop CEO and founder, she didn’t know “what the f**k we talk about.”

But neither plan to give up the fight anytime soon.

“Honestly, I really do love the immediacy of this work; I love engaging the public and hearing what their concerns, their perspectives are,” said Caulfield. “And it really forces me to stay on top of the science.”