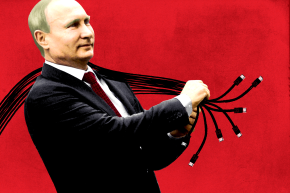 How Russia Is Trying To Rein In The Internet

Over the past few years, as more and more Russians go online, the government has banned various platforms and blocked millions of websites, targeted individual social media users, and increased its own surveillance powers. A particular uptick has been seen since March, when thousands of people protested across Russian cities in the biggest and most widespread demonstrations since 2011.

Some of the recent controversy has centered around a law requiring that companies store data of local users within the territory of the Russian Federation. The law, which came into effect on September 1, 2015, was widely regarded as an attempt to appropriate control over the internet and increase domestic security services’ access to data, reported the Guardian at the time. And under a June 2016 amendment to Russian internet law, facilitators of “information dissemination” were also required to store communications and users’ data and disclose data to authorities upon request.

In recent months, Russia’s communications regulator Roskomnadzor has started selectively enforcing these provisions. In November, it blocked LinkedIn for refusing to locate data servers within the nation’s borders. At the beginning of April, Russia declared that it was banning Zello, an app with 400,000 users in Russia that was reportedly instrumental in the organization of protests of Russian truckers.

Zello CEO Bill Moore said, in an April 13 blog post, that complying with Russian authorities would provide them with the ability to spy on conversations, claiming the company would also have to share all of its encryption keys with FSB, the Russian state security organization. “These are requirements that we are not able to meet or willing to comply with, even if we could,” said Moore.

Other services that were recently blocked in May by Russia’s regulator included messenger services and communications apps, BlackBerry, Imo and LINE, while on May 8, messaging app WeChat was temporarily also blocked for failing to register with the government. The following week, Russian publication Vedemosti report that Roskomnadzor had requested data from the messaging app Telegram, which has some six million users in Russia.

Telegram has refused to hand over information, saying in a statement on Tuesday: “No other government or special service in the world has ever received a single bit of data from us. That will always be the case.”

There have been media reports that some major tech companies, including Google and Apple and Twitter, have been willing to move data servers into Russia to comply with the law — but these have generally cited government sources, not the companies themselves, possibly to pressure them.

For example, Roskomnadzor chief Alexander Zharov leaked part of an alleged statement from Twitter vice president Sinead McSweeney on April 19, suggesting that Twitter was prepared to comply. However, Twitter never released an official statement itself. A source close to the matter said Twitter is “reviewing” its compliance with the Russian data localization law, adding that no “explicit guarantees” have yet been made.

Andrei Soldatov, Russian security services expert and author of The Red Web, said that even if the leaked quote was legitimate, the reason that it was leaked was likely to exert pressure on the social media giant.

“The whole thing is also a bit clouded by some strange statements made by government agencies apparently to impress the Kremlin, like this big statement about Twitter,” said Soldatov. “We didn’t get any reaction from Twitter so it looks like some agencies still feel the urge to impress the Kremlin, so they need to, well, produce some statements to the effect that ‘we are doing something’ and it’s extremely difficult to understand what they are actually doing,” he added.

The increasing pressure isn’t only on companies. Individual internet users who are communicating publicly online have also faced growing risks.

Anton Nossik, one of the Russian internet’s “founding fathers,” as he is frequently termed, was charged with inciting hatred after he controversially called on Russian President Vladimir Putin to “wipe Syria off the map” in a 2015 LiveJournal post. “The prosecution was asking for two years of imprisonment,” he said. In another case, Alexey Kungurov in Tyumen, Siberia, recently received a more than two-year prison sentence for justifying terrorism after publishing a blog post criticizing the Syria strikes. At the end of March, Russia’s Supreme Court upheld Kungurov’s sentence, reported legal news agency RAPSI.

Moscow-based NGO, the SOVA Centre for Information and Analysis, notes increasing cases of anti-extremism legislation being misused by authorities. It pointed out in its end-of-year report for 2016 that while there were no drastic changes in the deployment of anti-terror and extremism legislation against Russians, “the internet has been attracting increasing attention” and “statements, critical of Russian policies in connection with the conflict in Ukraine and the annexation of Crimea, continue to elicit a particularly strong official reaction.”

“If previously the government was interested only in control of LiveJournal … [the] 2011-2012 protests showed the importance of other networks, first of all – VKontakte,” said Sergey Davydov, deputy dean of faculty of media, communications, and design at Moscow’s Higher School of Economics, in comments emailed to Vocativ. VKontakte is Russia’s version of Facebook.

Nossik added that people had been arrested in 2016 for uploading an archive photo of a Nazi symbol to social media, posting a Soviet wartime cartoon ridiculing Hitler, and writing “God does not exist” in an online forum. “The number of sentences under Article 282 of the Criminal Code for the incitement of hatred online has been growing steadily from year to year,” the SOVA Centre for Information and Analysis, wrote.

It is much easier to track down and prosecute comparatively harmless people on social media rather than confront the threat of serious terrorists, Nossik theorized. Experts, however, don’t believe Russia will be successful in its attempts to attain better control of information online, as evidenced by the March protests. “All these ideas of intimidation of users have actually failed,” Soldatov said.

He added that since the protests, it looks like there has been an orchestrated attempt to influence material watched on social media, like “trying to change the top 10 videos on YouTube for the Russian audience,” he said, citing the popularity of a video released by opposition politician Alexei Navalny documenting the alleged corruption of Prime Minister Dmitry Medvedev. Later, a video was posted on YouTube depicting Navalny as a follower of Hitler.

“Social media are developing, and instruments of their control are developing as well. The government made some steps, for example, LinkedIn was blocked. But the task is not to block, but to create certain patterns of interaction,” said Davidov, suggesting that “rules” governing the relationship between state and all forms of social media are not set-in-stone.

On March 27, the Russian Education Ministry put out an official tender for a “patriotic education programme” of sorts, worth eight million rubles ($142,000). The contractor is required to engage in “system-wide activities in social networks.” However, Soldatov said that even trying to mold the minds of the youth may have a reverse effect.

“Apparently it was one of the reasons why so many young people decided to go to protests – because they were really enraged by these crazy lectures at schools,” he said.