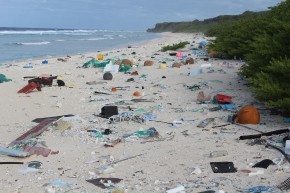 No One Lives On This Remote Island. It’s Still Covered In Trash
By Alasdair Wilkins

No One Lives On This Remote Island. It’s Still Covered In Trash

Henderson Island is 3,000 miles away from the nearest major population center, yet there are 17.6 tons of plastic on its beaches

There are few specks of land in the world more remote than Henderson Island in the Pacific Ocean. Uninhabited for most of its history and only visited by scientists once a decade or so, Henderson Island should be completely untouched by humanity. So what are 37 million bits of plastic debris doing on its beaches?

As reported in the latest issue of the Proceedings of the National Academy of Sciences, about 17.6 tons of plastic have washed up on the island since mass manufacture of bottles and other items began in the 1950s. A survey conducted in 2015 found that some parts of the island’s beaches had anywhere from 20 to 670 pieces per square meter, and that was just on the surface — digging a few inches down revealed as many as 4,500 items per square meter in the most deeply packed spots.

Plastic debris is one of the most devastating polluters of the world’s oceans, if only because there’s so damn much of the stuff. As bad as Henderson Island’s 37 million bits of plastic are, that’s nothing compared with the Great Pacific garbage patch, a gyre of floating trash that’s estimated to be anywhere from Texas-sized to twice the size of the United States. The trash-covered beaches, however, provide a particularly visible reminder of what happens to so much of the plastic people throw away.

It also points to the global nature of pollution. After all, Henderson Island is 125 miles from the nearest settlement of any kind, a 56-person village on Pitcairn Island that is the isolated island group’s only settlement. The nearest major population or industrial center is 3,000 miles away, which is more than the distance between New York and Los Angeles. It’s possible that fishing boats passing nearby the island make a contribution, but most of the plastic has to come from people back on dry land thousands of miles away.

By human standards, Henderson Island is no tropical paradise, with its mountainous terrain and lack of arable land helping to explain why the only major effort to settle it had to be abandoned by Polynesian navigators centuries ago. But the island is the only place in the Pitcairn Group where sea turtles can nest. The plastic debris has created a barrier blocking the turtles’ efforts, causing a drop in the number of eggs laid.

The researchers found turtles and seabirds tangled in fishing line and other trash during their visit, a grim reminder that garbage — especially of the plastic, non-biodegradable variety — doesn’t just disappear when thrown out.