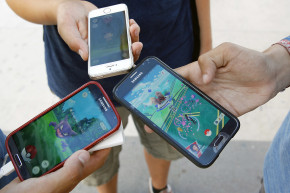 Scientists Still Studying Pokémon Go, Months After We All Moved On
By Alasdair Wilkins

Scientists Still Studying Pokémon Go, Months After We All Moved On

The craze around the augmented reality game offers plenty to study, even if it takes a while

At the peak of the Pokémon Go craze in July of last year, nearly 30 million people played the augmented reality game in the United States alone. Nearly a year later, the vast majority have moved on — but there’s one place where Pokémon Go is more popular than ever: Scientific journals, which are publishing new papers about the game as if it’s the trendiest thing in town.

Iowa State education researcher Emily Howell wrote about how Pokémon Go could help literacy in elementary schools in this week’s issue of The Reading Teacher. A paper published in the April issue of Media Psychology from University of Wisconsin researcher James Bonus and colleagues looks at how the game makes people happier and friendlier. A team of University of Washington presented a paper this week at an Association for Computing Machinery conference on how parents viewed the experience of playing the game with their kids.

News sites wrote a bunch of stories about Pokémon Go because it was dominating the pop culture conversation, then stopped once interest waned. Scientific papers also seized upon the massive public interest in the game, but for different reasons.

“Our initial interest in the game was certainly rooted in its popularity,” researcher James Bonus told Vocativ in an email.  “We knew if we surveyed people quickly enough, we’d be able to get a solid sample of players without having to oversample ‘niche markets.'” While previous studies on augmented reality could only consider hardcore gamers, Pokémon Go was the genre’s first big crossover into the mainstream. “This afforded us with a unique opportunity to study the effects of augmented reality gameplay while including a lot of more casual gamers who we would usually miss.”

That these papers are coming out now is actually a testament to how rapidly the researchers had to move in response to the initial fad, even if the game is now a distant memory for the crowds who wandered around last summer with their heads in their phones. “This is not the only field where scientists study timely events or have to rush to do science,” University of Washington lead researcher Kiley Sobel told Vocativ in an email. “For example, volcanologists may drop everything to go study a volcano after it suddenly erupts; physicists might be under pressure to collect data about a supernova event; or social scientists may rush to cover events like communications during the Arab Spring.”

Both Bonus and the University of Washington team came up with their research ideas within the first week of the game’s release, while Howell wrote her paper in September after spending the summer playing the game with her children. All three papers underwent peer review from other scientists, a process of feedback and revision that creates a months-long gap before publication. It was here that some of the researchers actually found the game’s popularity was a potential drawback.

“We had some pushback from reviewers that we were being ‘opportunistic’ in our study,” said Sobel. “Meaning we hadn’t completely thought through the research, and that there was some Pokémon Go usage decline.”

Bonus said his team’s reviewers similarly questioned whether the effects on people’s happiness and friendliness their research had uncovered would actually hold up once the initial fad ended. The team’s rebuttals were persuasive enough to get the article published promptly, after only a couple brief rounds of revisions. Indeed, all the researchers noted a turnaround of about seven or eight months from conception to publication is actually fast for scholarly papers.

“Academia will always struggle to keep up with any new technology,” said Bonus. Even Facebook can be difficult to study, he said, because its constant changes and updates make any study of a particular feature liable to be obsolete by the time the paper gets published. A fad like Pokémon Go is just a particularly extreme example of that. “Because of this, we try to frame studies not around a particular TV show, or movie, or game, but to frame them around more general, theoretical questions… We attempted to do that with our Pokemon paper. So, even though it’s about Pokemon Go, it’s also about many other things that transcend this one game.”

Similarly, Emily Howell told Vocativ her research focuses on how technology and literacy intersect, and the game speaks to a larger point about how kids learn better when they engage with lots of different ways to communicate information. In the case of Pokémon, that includes the augmented reality game, the trading cards, the tie-in books, and more.

While millennials’ nostalgia-fueled obsession with the game might have long since dried up, Howell said her kindergartener and second-grader still love the game and play it with their friends. As many as five million people in the U.S. do still play the game daily, after all.

The fact remains that, however briefly, Pokémon Go was a culture-defining craze, at least for a minute, and that makes it interesting. “I think sometimes, potentially, academics can be overly dismissive of pop culture,” said Howell. That doesn’t mean scientific journals should chase after every fad, but it does mean it’s worth considering just how a ridiculous fad like Pokémon Go can bring things into focus — even if everyone involved then has to wait a while to find out precisely how.