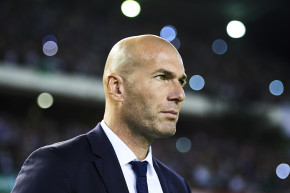 A Soccer Hero Fights Against Le Pen, For His Multi-Cultural France
By Emily Lever

A Soccer Hero Fights Against Le Pen, For His Multi-Cultural France

Considered a transcendent icon in France, Zidane, and what he has stood for, could be at risk on May 7.

Zinedine Zidane, as befits one of the greatest soccer players ever, is a national icon in his native France. So when Zidane, now the head coach of Spanish super-team Real Madrid, said in a pre-match press conference on Friday that a Marine Le Pen presidency “must be avoided,” those words carried with them the weight of an entire nation’s long-standing love. While many other personalities have spoken out against Le Pen’s fascism-like policies in advance of France’s runoff election on May 7, none of them could match Zidane in stature and grace.

With all the elegance of his trademark roulette dribbling on the pitch, Zidane called for an anti-Le Pen vote while avoiding a common error: labeling those who don’t plan to vote as enemies of the Republic. He said Le Pen was “the same one as in 2002,” meaning she stands for the same policies as her father, 2002 presidential candidate Jean-Marie Le Pen — a man so reviled for his racism and anti-Semitism that distancing herself from her own father has been central to Marine’s electoral strategy.

Marine Le Pen, whose right-wing National Front party was founded by colonial nostalgics, Nazi collaborators, and SS veterans, campaigned on a platform advocating for closed borders; a temporary moratorium on immigration; institutional discrimination against non-citizens for housing, jobs and healthcare; putting an end to the alleged “laxism” of the penal system; lowering taxes on corporations and the rich; and deporting all non-citizens who have been flagged by national intelligence services. And her 2017 platform is her, and the party’s, most moderate yet.

Zidane spoke out against the elder Le Pen in 2002, calling the Front National “a party that doesn’t correspond to French values.” The next 15 years would prove Zidane wrong. Even his hometown of Marseille, one of the most diverse cities in France, has seen the party’s rise. In the first round of the 2017 presidential election, Marine Le Pen came in second in Marseille with 23.6 percent of the vote, and she outright won the Bouches-du-Rhône department of which Marseille is the capital. Still, the city’s favorite son has mostly stayed away from politics. It’s just that politics can’t stay away from Zidane.

The French team Zidane played alongside to win the 1998 World Cup quickly became a political symbol. A dream team that featured players with origins in every region of the world that had ever been governed by France — from mainland France to Guadeloupe to Algeria to Senegal — and some that hadn’t, like Armenia and Argentina. Zidane, that team’s unquestioned star, is himself the son of Algerian immigrant parents.

That team was hailed as a symbol of diversity and coexistence; it represented “la France black-blanc-beur,” a pun on “bleu blanc rouge”—blue, white and red, the colors of the French flag. The appellation, while catchy, was flawed to begin with. “Beur,” a slang term for “Arab,” is not a word white people should feel comfortable using. And using the English word “black” as a noun to refer to a black person (“un black, une black”) isn’t the height of cultural sensitivity either.

Still, in a country where the French-born descendants of post-colonial immigrants weren’t seen as truly French, proclaiming that people of color were as central to French identity as the colors of the flag looked promising. Belgian-American sports scholar Laurent Dubois recalls seeing the 1998 team as “a transcultural republic on the field,” a sign that a multicultural, inclusive France was possible.

And it might really have been possible had the nation only processed its colonial history. When presidential candidate Emmanuel Macron called the colonization of Algeria a crime against humanity, he was met with horrified disapproval — even though the French army committed war crimes to “pacify” uprisings and the government upheld a system of laws called the “Code de l’indigénat,” a near-twin to the American South’s Black codes. After parliament acknowledged in 1999 that “the events of Algeria,” as they were called at the time, had actually been a war, awareness of that historical moment surged. In his analysis of the 2017 election, the first election since 2002 to put an outspoken colonial revisionist so close to the presidency, Nicolas Lebourg, a researcher focusing on far-right politics at the University of Montpellier, argues that as the relevance of World War II faded, the fight against fascism was superseded by inter-ethnic conflict.

Back in 2002, when Zidane decried the electoral success of Jean-Marie Le Pen and declared the FN didn’t correspond to French values, the elder Le Pen responded by saying Zidane was being manipulated by people who wanted to use his fame. This seemed to be his way of saying Zidane couldn’t have — or perhaps wasn’t French enough to — make such a judgment on his own. But coming from the elder Le Pen, accusations that someone might be using athletes as political pawns are ironic. Le Pen often used the national team to make a point: as early as 1996, he said he found it “artificial to bring in foreign players and call them the French national team.”

There’s another layer of irony here: the success of the team and other diverse and visible institutions was instrumentalized to push the message that colonial history and structural racism posed no problems — because French ideals of “liberté, égalité, fraternité” were universal and transcended race. That line of thinking played right into the National Front’s hands.

If the team symbolized race-transcending, universalist French values, then Zidane was the perfect captain. He never spoke about his identity except to say he was proud of being French. (It’s not like he had the option of saying he wasn’t.) French people don’t really “do” nicknames, but Zidane has one: Zizou, an adorable name that has the additional advantage of being a lot more racially and ethnically ambiguous than Zinédine Yazid Zidane. The fact that “Zizou” is ethnically Kabyle, not Arab, and that like many Kabyle people he has light skin and eyes, probably didn’t hurt his chances of becoming the poster boy for the “blacks-blancs-beurs”.

The poster boy’s acclaim seemed to resist turning tides. In 2004, a law banning “ostentatious signs of religion” from French public schools was passed. The measure was billed as innocently secularist even as it obviously targeted girls who wore the Muslim headscarf—and would even be used to send home Muslim girls whose skirts were too long. In that same year, Zinédine Zidane, Muslim-sounding name and all, was voted most popular personality in France for the second of what would be six times.

In November 2005, the banlieues — the outer cities full of housing projects inhabited mostly by black and brown people — rose up, or rioted, depending on who you ask. The response of the rest of the country was not to pour resources into combating youth unemployment, police harassment and brutality, and underfunded schools, but to crack down on “racailles,” which means “scum” or “thugs” but is often used to describe anyone and anything of or relating to the banlieues.

The political climate was souring. Zidane couldn’t transcend race forever. And so the last match of his career — the 2006 World Cup final — was the end of an era in more ways than one. The game was tied in the 110th minute. Marco Materazzi whispered something to Zidane. It may have been a slight against Zidane’s mother or possibly a racist insult. Zidane headbutted Materazzi in the chest, knocking him to the ground. The referee expelled him. France lost its bid for its second World Cup in eight years on penalty kicks.

While many of Zidane’s fans sympathized with his actions, others argued that the respectable young man who’d become the nation’s darling hadn’t just been foolish or reckless — he’d shown his true colors, so to speak. Even among the pundits who likened him to a fallen saint, many explained his act as the instinct of a kid from the cité (the projects), of “Yazid from la Castellane.”

In other words, his original sin was his origin. Zidane’s victories were the pride of the whole country, but his failings were used to stigmatize his community. A 2,800-word editorial in Le Point by six co-authors directed a new level of vitriol toward Zidane. “With an act worthy of a housing-project thug, [Zidane] revives the shameful memories of November 2005,” they wrote. No wonder the French public’s fondness for diversity didn’t survive the national team’s hot streak.

Jean-Marie Le Pen got his wish in the end, both as a politician — he was removed from the party he founded, but has appreciatively noted the “lepenization of people’s minds” — and as a sports fan. The investigative site Mediapart reported in 2011 that Laurent Blanc, the head coach of the national team, colluded with French Football Federation officials to set quotas limiting the number of young players of “foreign origin” in the youth training centers that serve as feeders for the national team. Blanc reportedly wanted to favor kids who shared “our culture, our history.”

Blanc at least has the merit of acknowledging the importance of shared history. But Blanc and his fellow people with “lepenized” minds really only respect history through lip service. They value the historical myths that coddle their ignorance — the idea that “our ancestors were Gauls” or that French colonization civilized unenlightened peoples—but refuse to acknowledge that shared history unites them in a common national destiny with people who look like Thierry Henry and Zinédine Zidane. That’s a truth none of Marine Le Pen’s border walls will ever keep out.