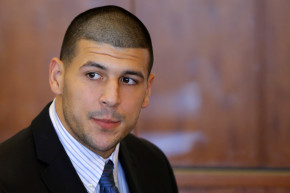 And there's a whole lot of legal wrangling in the offing

Aaron Hernandez’s family posthumously donated his brain to scientists, seeking to determine if the former NFL star suffered from CTE. Hernandez took his life in prison, hanging himself while serving a life sentence for a 2013 homicide. When the Boston University scientists receiving his brain conclude their study, their findings could provide context for Hernandez’s erratic behavior while opening avenues for legal recourse against the NFL.

Regardless of the relationship that exists between chronic traumatic encephalopathy and human behavior, CTE would not completely absolve Hernandez from his killing of Odin Lloyd. However, CTE discovery could explain why Hernandez was erratic and paranoid in the years leading up to his murder conviction, imprisonment, and death. Some people formerly close to Hernandez corroborate the narrative about his behavior.

Alexander Bradley, a star witness in his double homicide trial, testified that Hernandez had “a habit of getting angry and shooting.” Bradley also said that after Hernandez allegedly murdered Daniel de Abreu and Safiro Furtado, he constantly “assumed everyone [he encountered] was a detective.” (Hernandez was acquitted of the double homicide last Friday, days before his suicide.) Either way, a CTE diagnosis complicates the legal options for Hernandez and his victims, as both parties would argue the amount of culpability in civil court.

When researchers discovered that former Pro-Bowl linebacker Junior Seau developed CTE before committing suicide in 2012, Seau’s family sued the NFL for wrongful death, arguing that not only did CTE cause his suicide, but that the NFL obscured the severity of his injuries. However, they also opted out of the NFL’s coming CTE settlement in 2014. Sports Illustrated columnist and legal expert Michael McCann explained how the suit from Seau’s estate could affect how Hernandez’s family proceeds. McCann wrote:

Does the NFL concussion settlement extend to Hernandez and, by extension, his family? If the answer is yes, then Hernandez’s family may be barred from pursuing a wrongful death lawsuit and would instead need to pursue a claim through the existing settlement.

McCann also notes that even if Hernandez’s family was able to move forward with a wrongful death suit, it might be difficult to prove that his time in the NFL caused his brain injuries, let alone that the NFL was unlawful—Hernandez also played football in college and high school.

So far, 94 deceased NFL players have posthumously donated their brains for trauma research. Of those 94 brains, researchers discovered CTE in 90.

More research will help scientists and the general public understand what repeated head trauma does to the human brain, and perhaps get brain-damaged athletes the treatment and counsel they need.