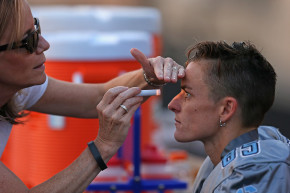 A new study shows a startling disparity in concussion rates

Before USA Hockey reached a labor agreement with its women’s team, the organization attempted to replace their elite roster with high schoolers. USA Hockey’s posturing was misguided on many levels—the women’s demands for a livable salary and additional support for their families were eminently reasonable, plus, they medaled in each of their Olympic competitions. Perhaps worst of all, however, was that USA Hockey’s active recruitment of teenage girls for a competition against adult women playing a contact sport at its highest level demonstrated neglect of their well-being. A new study indicates that girls playing high school sports have more than 50 percent higher concussion rates than boys.

Dr. Zachary Y. Kerr, a University of North Carolina professor and research director for the Center for the Study of Retired Athletes at the University of North Carolina, has studied concussion rates throughout 27 high school sports between 2011 and 2014. Using information from the National Athletic Treatment, Injury and Outcomes Network (NATION), Kerr and his team found tremendous disparities in the likelihood of concussions for girls, particularly when controlling for sports that both boys and girls played, like basketball, softball, and of course, hockey.

Among those sports, sport-related concussion rates were roughly 56 percent higher for girls. The recorded concussion rate for girls’ softball and baseball was over four times greater than for boys. Player-to-player contact, like, say, a replacement player teen colliding with 5’10,” 160 lb Russian defender Angelina Goncharenko, was the likeliest cause of a concussion injury, accounting for 40 percent of girls’ concussion injuries.

Kerr and his team of researchers note that there are some caveats to their study. For example, some studies indicate that boys are more likely to report concussions. The authors also believe that some difference may result from a lack of quality equipment. This argument seems especially plausible when considering the challenges Team USA faced when requesting a financial investment equal to the men.

Additionally, many researchers believe hormonal and anatomical differences between males and females are also a significant factor in concussion disparities. (Pink Concussions, a non-profit organization spreading awareness of concussion rates among girls and women, nicely summarizes the existing body of research.)

According to Kerr, parents and athletes should be active advocates for better prevention strategies. In an email to Reuters, Kerr wrote that their involvement “needs to include more than just reviewing concussion fact sheets. This should include advocating to their high schools the importance of having concussion education and prevention programs that can help mitigate the incidence and severity of concussion.”

One good place to start? Revise the standard concussion protocol to go beyond inconclusive diagnostic tests and require including a regular MRI.

Fortunately for Team USA, the high school girls put the good of the professional team before their own. And, fortunately for the girls, their show of solidarity may have an extra benefit, saving their own brains.