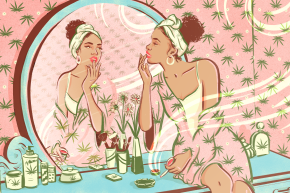 As weed loses its stoner stigma, women could become the gatekeepers of a more mainstream cannabis culture

When Diane Czarkowski, 50, is ready to relax at the end of a long day, she uses cannabis to take off the edge in the same way many women her age unwind with a glass of wine.

“For me, it’s a good way to transition from work-mode, when my brain is going a thousand miles an hour, to settling down and making dinner,” she said.

Cannabis is pretty much incorporated into her and her family’s lifestyle. Czarkowski owns a fashionable Annabis “toke-bag” that has odor-proof compartments to prevent her bag from reeking of pot, she just signed up for DIY class on cannabis-infused skincare products, and she talks freely to her children about cannabis culture at the dinner table.

Granted, Czarkowski, and her husband work in Colorado’s burgeoning cannabis industry at their cannabis business consulting firm, Canna Advisors, so being familiar with the product comes with the territory —but she maintained that she, her husband, and her friends are representative of a growing class of professionals who are living an openly (and moderately) cannabis-infused lifestyle. “If anything becomes too prevalent, it’s not a good thing,” she said.

As weed is legalized in several states and developed in less potent forms, cannabis is losing its stoner stigma. Czarkowski and many other female executives in the business, who make up a third of leaders in the industry, talk about cannabis more as if were a lifestyle product you’d purchase at Whole Foods or CVS.  At the same time, companies are marketing cannabis personal care products — from sexual enhancement oils and massage oils to even cannabis-infused tampons — specifically to women, who they know make the vast majority of household consumer and drug store purchases. These brands often emphasize the benefits of cannabis or cannabis compounds without the tropes associated with its use.

“What we’re finding as we look at the data is cannabis is very much a part of lifestyle. It’s also a part of routine,’ said Linda Gilbert, who works for the cannabis market research firm BDS Analytics. She said the firm’s recent statistically-representative survey of 1,200 adult cannabis users in Colorado and California found that 45 percent were women. Of those, nearly half said they were likely to use marijuana or marijuana containing products to relieve PMS, menstrual cramps, manage mood swings. About a third said they’d use it to enhance sex or relieve menopause symptoms.

Companies have taken notice. For example, take Whoopi Goldberg’s line Whoopi and Maya: It sells products like Epsom salts and raw cocoa aimed at relieving menstrual cramps and menopause symptoms and other ailments. Its products use THC, the chemical compound in weed that gets you high, and CBD, a cannabis compound that doesn’t share THC’s psychoactive properties but is being used to fight acne, fibromyalgia, and insomnia, among other ailments.

“Our demographic are people who would like to be healthy, want to feel relief, and don’t want to consume chemicals,” said the brand’s co-founder Maya Elisabeth. “It’s definitely for the working woman who doesn’t have to take time off for her menstrual cycle.”

Increasingly, businesses are marketing cannabis as a product that’s beneficial for its health properties, rather than its psychoactive experience—which explains why microdosing, ingesting just a small amount (10 milligrams of less) of THC, is being touted by busy professionals for its creativity and productivity inducing properties.

Kiva Confections, an Oakland, Calif.-based, women-owned edible firm, is just one of company making “chill pills” meant to appeal to women. According to Christie Strong, Kiva Confections’ marketing communication manager, the company’s main customer demographic is in their mid-30s and above and skews mostly female. Right now the brand’s most popular products are its Terra Bites, chocolate covered blueberries and coffee beans with five milligrams of THC, and its Petra Mints, which have a mere 2.5 milligrams of THC. “They’re the perfect product for a new patient and ensure that no one is going to have an overwhelming experience,” Strong said.

“Instagram has shut us down eight times,” said Strong. The guidelines for posting products on social media are inconsistent, she said, which is challenging since many of the company’s customers make purchasing decisions through these channels. Because of this challenge, Kiva Confections relies on educating their current customers through word-of-mouth-marketing.

“Our users essentially become our biggest advocates,” she said. Much like how wine companies will sample product at grocery stores, Kiva Confections has brand ambassadors who host sampling events and focus on “bud-tender” education, as they are the ones making recommendations at dispensaries.

This word-of-mouth component is essential, Gilbert said, because once women find a bud-tender they like they become loyal fans. Her interviews revealed that women’s relationship with their bud-tender is much like a relationship with a hairdresser. If they move dispensaries, the women will follow.

Skin care and other alternative forms of application are also new markets for companies. For example, CBD For Life is just one company that sells topical products without THC, making it easier to export. Founding partner and sales director Mollie Twining said the woman-owned and operated company, which launched in February 2016, saw over $300,000 in sales last year and is looking to grow by 50 percent in 2017. “Bed Bath and Beyond reached out,” Twining said. “They’re interested in carrying our products and hearing more about us.”

Caroline Rustigian-Bruderer, founder of the PR and branding firm K-Line & Company, is a fan of the company’s topical line, which promotes CBD’s anti-inflammatory and antibacterial products. She uses it for a variety of ailments from sunburns to cuts to aches and pains. Having once represented Clinique, she predicts mainstream companies will develop products that contain cannabinoids such as CBD some day.

Eventually women will likely become the gatekeepers as to which cannabis devices and products are used in the home, according to Emily Paxhia, managing director of San Francisco-based Poseidon Asset Management, a hedge fund for the cannabis industry. Cannabis makes sense to people seeking ways to relieve pressures of daily living, she wrote in an email, because it’s a natural substance that has been used as medicine for centuries.

“We are living in a time where people are seeking new behaviors and are going back to ancient foods, medicines and practices to relieve stress… I think brands that are winning with women are the ones encapsulating the things women care about—health, wellness, maintaining a busy life effectively, looking good and being present.”