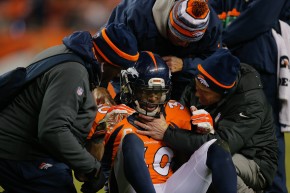 Recent studies on brain trauma are forcing medical professionals to reevaluate how quickly they allow athletes to return from a concussion. A Wall Street Journal report on possible flaws with current concussion protocol may infer that athletes at various levels of competition—from high school all the way to the NFL—are at serious risk of reinjury.

Current concussion protocol usually works like this: If an athlete gets concussed, they must stop playing and practicing until receiving clearance from a medical professional. The professional uses a cognitive exam to determine if an injured person’s cognitive functions have returned to normal. Using the exam’s rubric, they measure the athlete’s reaction time, attention span, nonverbal problem-solving, and other cognitive skills, comparing their post-concussion results to a baseline established before the start of the season. If the athlete passes, they can run and tackle and headbutt as much as they (or their coach and general manager) please.

The industry standard version of this test is designed and sold by ImPACT. The company’s website claims that over 7.5 million individuals have taken their test and that over 1,000 colleges and 7,400 high schools use it to keep their students safe.

However, what if a brain heals after its cognitive function returns? That’s what Michael McCrae, a professor of neurosurgery and neurology at the Medical College of Wisconsin, believes his research may suggest.

“There is a period of vulnerability after the athlete’s cognition is recovered but before the brain is is recovered,” McCrae told the Journal. If so, it may explain why Kenny Bui, a 17-year-old high school football player, died three days after a collision and a month after receiving his first concussion that season. Terri McMahan, the athletic director for Bui’s Evergreen High School, said they “followed the standard protocol.”

McCrea initially found a difference between the diagnostic results of cognitive exams and the biological results available from an MRI while studying a small sample of athletes. Now, he’s studying a much larger group: he’s tracked the health of 28,000 college athletes over the past three years.

Along with his team of researchers at the CARE Consortium, McCrea argues that clinical assessments of concussions are “a surrogate index of recovery, but not a direct measure.” In other words, someone can look, act, and feel completely normal, normal enough to pass a cognitive test at least. Studying behavior is only one piece of the puzzle. Making advanced brain scans more accessible could prevent serious injuries because they’re capable of examining the physiological health of an athlete’s brain.

Michael Wahlster, chief executive at ImPACT, defended his product by touting its clinical utility while arguing that widespread brain scans are unrealistic, especially in youth sports. Wahlster said that though ImPACT doesn’t make “diagnostic claims,” they do “give providers the best device” to help them make a diagnostic decision. But, if Wahlster’s clinical exam fails to tell a concussed athlete much about their literal, biological health, their “best” isn’t good enough.