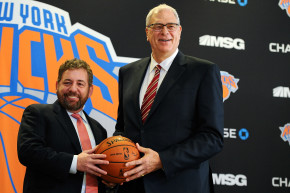 New York Knicks team president Phil Jackson, engaged in the coldest of wars with Carmelo Anthony since signing him to a five-year contract, went beyond his usual passive-aggression and, instead, directly announced his intentions to trade Anthony while insulting his on-court skills. What Jackson have may not have accounted for—besides the utility of creating easy three point shots via a good pick and roll—was that choosing to slam his star player may have created a legitimate labor dispute.

Jackson hit the big red button during a Friday press conference, telling the media in attendance that Anthony would be “better off somewhere else,” one of many stunningly candid statements he made about the team’s best player.

NBA Player’s Association executive president Michele Roberts was not impressed with Jackson’s duplicitous comments. “If players under contract cannot, under threat of league discipline, speak openly about their desire to be employed elsewhere, we expect management to adhere to the same standards,” Roberts said in a statement. “The door swings both ways when it comes to demonstrating loyalty and respect.” Roberts also mentioned that she brought the NBAPA’s concerns to league commissioner Adam Silver.

Jackson added that the Knicks “need players that are really active, can play every single play defensively and offensively,” but that he’s acquired “some players on the court who can do that.” The Knicks ranked 26th (out of 30 teams) in defensive efficiency. They were 18th the year before.

The league has busted Phil Jackson for crossing the line before. Back in 2014, he announced his desire to hire Derek Fisher as a head coach. The only problem: Fisher was still under contract with the Oklahoma City Thunder and playing for his team in the playoffs. The league fined him $25,000. You would think he’d know that candidly announcing his plans to remove a player from his team could get him in trouble with the player’s union. Then again, he should have known that among most available metrics, Derrick Rose was the worst rotation player on last year’s thoroughly mediocre Chicago Bulls. Or, that Rose was under trial for a gruesome sexual assault. None of that stopped him from acquiring the declining, injury prone, suspiciously-acquitted point guard in a trade.

When Jackson isn’t blatantly violating the collective bargaining agreement, he clumsily extends his forked tongue into myth and parable. Earlier, he responded to a Bleacher Report column about his struggles to build a functional bond with Anthony with, well, whatever the hell this is:

Bleacher's Ding almost rings the bell, but I learned you don't change the spot on a leopard with Michael Graham in my CBA daze.

After opening your third eye (or Googling “Michael Graham”), you can see Jackson analogized a 32-year-old All-Star forward to Graham, a former Georgetown star he coached on the Continental Basketball Association’s Albany Patroons. Graham famously dealt with numerous personal problems after his illustrious college career, including a cocaine addiction. Besides the fact that Graham’s apparently resolved the flaws of his youth—Graham provides mentorship for DC kids through his nonprofit charity, Bounce Back Legends—it’s completely out of pocket to compare Anthony’s on-court deficiencies with Graham’s well-documented struggles with a drug addiction. Jackson unnecessarily exaggerated the arbitrary sin of poor defense and ball-hogging while moralizing a young man’s health problem, one he should be celebrated for overcoming.

When Jackson got excoriated for his inappropriate insults of Anthony and Graham, he dismissed criticism as a mere “misunderstanding,” demonstrating that he’s just as capable of playing lackadaisical defense as Carmelo or anyone on his miserable team:

Melo, to his credit, responded to Jackson’s nonsense with nothing more than Instagram memes and his brand-friendly hashtag. Star forward Kristaps Porzingis, the one acquisition Jackson unquestionably got right since joining the team, reportedly skipped out on his exit interview with Jackson out of frustration with his team president’s dysfunctional leadership. Porzingis and promising rookie Willy Hernangomez, “liked” Anthony’s Instagram, yet another sign that Jackson is losing the team.

It’s hard to exaggerate just how terrible Jackson’s awful leadership has been for the future of his team. If Jackson doesn’t heed the Player’s Association’s warning to, essentially, be a little more Zen and shut his fat mouth, he might end his basketball career with 11 rings and 12 angry men.