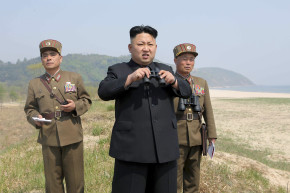 The North Korean Nuclear Nightmare May Already Be Here

A series of light flashes and four columns of smoke rise into the sky. Atop each of them, a Hwasong-7 ballistic missile aimed towards Japan. Soldiers on the ground watch as the rockets ascend in tandem through the clouds.

This time it was just a test. But from the eyes of an observer at the launch site, a North Korean nuclear missile strike would not have looked much different. And while this was as much a political act of saber rattling as it was a trial of a new military system, it nonetheless underscores the rapidly growing threat posed by the rogue state.

North Korea has been developing nuclear weapons now for more than two decades. A number of international diplomatic efforts slowed this progress, but the last such program failed in 2009. The country which calls itself the Democratic People’s Republic of Korea (DPRK), tested its first nuclear weapon in 2006. Since then the DPRK has accelerated its progress, testing new nuclear devices in 2009, 2013, and then two more last year.

The explosive yields on these bombs have been small (for nuclear weapons) however, analysts believe this points to a disturbing possibility– that North Korea is attempting to build miniaturized nuclear warheads. While its propaganda channels already claim to have achieved this capacity, the DPRK’s nuclear test program seems to be a step-by-step approach to building nuclear missiles.

Concurrent to its nuclear program, North Korea has also forged ahead with the testing of new missile types. Among these, are the Taepodong-2 intercontinental ballistic missile (ICBM), theoretically capable of reaching the west coast of the United States, as well as the Scud-derived Hwasong and Rodong missiles, which were tested this week, and have a strike range which threatens regional US allies such as South Korea and Japan. One final, and perhaps most worrying threat is the Pukkuksong-1 submarine-launched ballistic missile (SLBM) which can be launched from beneath the waves.

Clearly, the country is hell-bent on creating the ability to launch a nuclear attack. The likely reason for this is to function as a so-called “nuclear deterrent.” Should an adversarial nation such as the US or South Korea attempt to attack the North, they can retaliate with nuclear weapons and make such an attack too costly to be considered. Assuming this, all intentional diplomatic efforts have gone into trying to prevent it.

Unfortunately, they have failed.

“Many analysts believe that North Korea already has the capability to place a nuclear weapon on top of a Rodong missile, so South Korea and Japan are already threatened by a possible North Korean nuclear strike,” says Scott Snyder, Director of the Program on U.S.-Korea Policy at the Council on Foreign Relations.

“North Korea is probably capable of mounting atomic warheads in the Scud-ER and similar Rodong missiles today, giving them a credible deterrent against South Korea and Japan. The history of their nuclear testing suggests a focused effort at developing lightweight atomic weapons, with consistent results in the last few tests pointing to at least one warhead design having achieved high reliability. Almost certainly this warhead will fit their existing missiles,” he explains.

Even using the small-yield devices so far developed by the DPRK, a nuclear first strike, if successful could easily kill millions in north Asia, and cripple the global economy. Given this, the US and its regional allies are taking defensive measures.

The most talked up of these is the US deployment this week of the Terminal High Altitude Area Defense (THAAD) system to South Korea. This anti-ballistic missile system fires its own missiles to intercept incoming threats before they hit their targets. It is combined with other systems in use including Aegis and Patriot to provide a measure of breathing room. But in a real war, it might not be sufficient.

“THAAD, Aegis, and Patriot are all capable of engaging multiple targets simultaneously, and will probably destroy most missiles aimed at South Korea or Japan. With nuclear warheads on some of those missiles, ‘most’ may not be enough,” says Schilling.

With the situation growing ever more dire, military planners are beginning to consider the unthinkable – a first-strike targeting North Korea’s nuclear facilities. This would theoretically cripple the country’s nuclear weapons production and would buy time for a more congenial government to come to power in Pyongyang.

To say such an action would be difficult and risky however would be a massive understatement.

Some North Korean nuclear sites, such as the Yongbyon nuclear complex are above ground and would be relatively easy to destroy. Other sites, however, are likely located in hardened underground shelters, meaning that a large strike element would be necessary.

“Much of the Yongbyon nuclear complex could be destroyed by air attacks — aircraft and/or cruise missiles. But underground facilities first have to be found and then have to be struck by precision munitions — finding things is the potentially difficult part — North Korea denies a lot of information to the outside world,” says Bruce W. Bennet, a senior defense researcher at RAND Corporation.

“A major attack against those facilities almost certainly cannot be done without starting a wider conflict.”

Even if nuclear weapons are not used, North Korea has enough artillery aimed at South Korea to all but level the capital Seoul and cause hundreds of thousands of casualties.

Scott Snyder agrees that such a first-strike would likely lead to a disastrous war.

Alternative options such as information operations aiming to destabilize the North Korean regime could be more attractive, as would be additional diplomatic pressure by China. But this itself could leave the DPRK’s leadership feeling even more under siege and may precipitate yet more irrational behavior.

The situation on the Korean Peninsula remains one of the greatest challenges currently facing the international community. With the DPRK preparing for what looks like yet another nuclear test, countries in the region, and major powers like the US and China need to present a united front in order to deter aggression and work together on a possible solution. The only other alternative would be war.