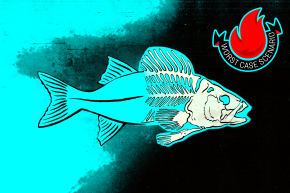 The Oceans Are Churning Towards A Warm, Fishless Future
By Taylor Hill

The Oceans Are Churning Towards A Warm, Fishless Future

As climate change worsens, the world faces a scary loss of fisheries that feed the world

Seafood is a critical protein source for more than 2.5 billion people worldwide, but decades of overfishing have decimated fish populations, while warming waters have pushed species into new territory and affected their reproductive cycles. Already, according to World Wildlife Fund’s 2015 stock assessment, populations of fish that frequent dinner plates—including tuna, mackerel, and bonitos—have fallen 74 percent since 1970.

Malin L. Pinsky, a marine ecologist at Rutgers University, believes runaway climate change could, one day, be the final nail in the coffin for global fish markets.

“That’s a real concern when billions of people rely on fish as a key part of their nutrition,” he said. “If temperatures continue to climb unabated, we’ll find water that’s too hot for many species. Many species would find they can’t get enough oxygen. We wouldn’t recognize many of the fish off our coasts. It’s not an ocean I’d be excited to pass off to my kids.”

Before Trump’s election, limiting global warming to 2 degrees Celsius — though it still would bring droughts, floods, and sea level rise — seemed like a reasonable goal for the world to aspire to. Even then, that threshold was still a difficult stretch, given the current pace of actions to curb greenhouse gas emissions. Now, to many looking at Trump’s plans to revive coal, drill for oil, and strike down climate policies, that goal seems like a pipe dream. The most dire climate predictions, including famine, flooding, and plagues, are back on the table.

The seas, and the people who rely on them, could take the biggest hit.

Fewer fish in the sea makes it harder for fishermen to catch their quotas, even as fishing technology has improved with bigger nets, better fish-finders, and faster boats. Demand, too, has increased: In 2015, global fish consumption rose to over 44 pounds per person a year — four times what it was in 1950. That demand has left 85 percent of the world’s fish stocks over-exploited, depleted, or fully exploited. Meanwhile, population crashes—such as among the west coast’s sardines—are forcing regulators to close fisheries early and more often, further  hindering annual catch levels.

Already, warming oceans are having an effect. “The waters of the northeast U.S. are warming faster than nearly anywhere on Earth, and this is pushing fish into places they’ve rarely been seen,” said Pinsky, who focuses his research on asking what our oceans might look like a century from now.

“Most marine animals only tolerate a narrow range of temperatures, which makes them especially sensitive to warming,” Pinsky says. Black seabass—once abundant off Virginia’s coast in the 1990s, are now most frequently caught off New Jersey, and even as far north as Maine.  As their natural habitats warm, they’re moving north to find colder water. It’s a trend seen in many East Coast fish species, including whiting, herring, mackerel, black sea bass and yellowtail flounder.

Across the Atlantic, a similar fish story is unfolding, as warming waters have pushed mackerel from the United Kingdom up to Iceland. That’s sparked a dispute over who has the rights to catch those fish. Meanwhile, Scottish fishermen have been able to supplement their lost mackerel with squid—a species typically associated with the warmer waters of the Mediterranean.

As species shift territories, fishermen respond accordingly, chasing the fish. West African seas, for example, for the past 30 years have seen EU trawlers scooping up hundreds of thousands of pounds of fish every day to make up for the dwindling stocks in European waters. According to the United Nations Food and Agriculture Organization, all West African fisheries are already over-exploited, and the region’s coastal fisheries have declined 50 percent. Under expected climate warming, catches across the tropics are expected to decline a further 40 percent by 2050, even though some 400 million people in Africa and Southeast Asia rely on caught fish for their protein—not to mention the millions of jobs at stake, such as artisanal fishing.

“In the face of a warming ocean, low-latitude areas appear to be under the greatest threat in terms of ‘lost’ catch, with high-latitude areas likely to see some gains,” said Kathryn Matthews, deputy chief scientist at marine conservation group Oceana.  What’s unfortunate, she said, is that tropical countries tend also tend to be the most reliant on fish as a food source.

Today, research groups are using climate models to map where fish might go as the oceans warm. Looking at how fish have moved under known temperature changes, Matthews said,  aids future projections. But scientists don’t yet know just how warm the oceans might get: that depends in large part on how serious countries stick to global climate agreements, including the Paris Agreement ratified by many nations in 2016 . If the world can curtail human-caused greenhouse gas emission increases, the fish in the sea have a chance. If we don’t, they don’t.

That’s the gist of a recent study, which found that for every degree Celsius the ocean warms, fisheries will lose about 3 million tons of potential fish catch per year—which comes to a loss of about 34 million servings of fish annually. “If one of the largest carbon dioxide emitting countries gets out of the Paris Agreement, the efforts of the others will be clearly reduced,” says Gabriel Reygondeau, who co-authored the study and is a senior fellow at the University of British Columbia’s Institute for the Oceans and Fisheries.

“Under the worst case scenarios,” Matthews says, “we are looking at a major loss of fisheries productivity, coral reef habitat, and even climate-induced extinction of marine species in the tropical countries that are also the most vulnerable to land-based climate threats like drought and extreme weather.”

Facing that bleak possibility, scientists have continued to advise countries and regulators on how best to manage fisheries, oceans, and marine habitats. It’s a job made more difficult when world leaders don’t offer a friendly ear. With President Trump taking office, some climate scientists have had to shift their focus from conducting new research to preserving baseline data sets. Fifty scientists have volunteered to make sure the climate change data stored on U.S. government websites, such as the Environmental Protection Agency and NASA, are stored on non-government computer servers, just in case the Trump administration removes them.

Data may be even more difficult to collect in the future, as federal funding for climate change-related studies—such as the $5 million in grants awarded last year to study sustainable fishery management—could be a thing of the past.

Oceana’s Matthews is unnerved by the possibility that the United States may give up its position as a world leader on climate-change science. “I began my ocean science career studying El Niño, a global climatic phenomenon with massive impacts on so many industries, including fisheries, agriculture and energy,” Matthews said. “The more we understand how the climate works, the better we can anticipate changes and plan for their consequences—including economic ones.  We ignore this at our own peril.”

What’s the worst that can happen? Vocativ is exploring the power of negative thinking with our look at worst case scenarios in politics, privacy, reproductive rights, antibiotics, climate change, hacking, and more. Read more here.

This story was corrected to correct a spelling error in Kathryn Matthews’ name.