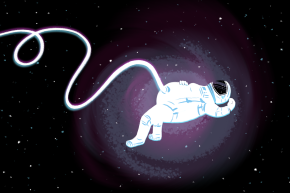 The Future Of Human Reproduction: Space Pregnancy
By Arielle Pardes

A new movie, "The Space Between Us," is about the first human born off-planet. It's a real scenario scientists are investigating

If you want to launch into space as an astronaut with NASA, you can’t have a cardiovascular disorder, you can’t have had LASIK surgery in the past year, and you definitely can’t be pregnant. That’s because for all we know about the bizarre things that happen to the human body in space — the way eyeballs get slightly flattened, the loss of bone density and redistribution of body fluids, the fact that astronauts develop callouses on the tops of their feet while the soles of their feet become baby-smooth — we still don’t really know what would happen to a human life in utero.

And NASA isn’t quite ready to find out, which is why the agency’s medical standards for spaceflight specifically disqualify pregnant women from flight duty, as well as a number of training exercises. Every female astronaut is given a pregnancy test in the ten days preceding a mission launch, and in 2001, the International Space Station even started stocking DIY pregnancy tests for any astronaut who might suspect she had become pregnant in space.

But still, what if? The idea is laid bare in the new film “The Space Between Us”, which premiered in theaters last week. In the film, an astronaut discovers she’s pregnant while aboard a space shuttle heading to Mars. She dies due to complications with childbirth, but her son, Gardner, survives and eventually grows up to be a thriving teenager living in the first-ever human colony on Mars.

Obviously this isn’t a scenario that NASA has had to deal with yet, but it bends reality just slightly toward what may soon be possible — which is why some researchers have already started looking into how human pregnancy would be impacted by factors like zero gravity, cosmic radiation, atmospheric pressure, or if space is too hostile to support new human life at all.

Figuring out the answer to that question is part of Jeffrey Alberts’s life’s work. Alberts, a professor of biological and brain sciences at Indiana University, has spent decades working alongside NASA-affiliated scientists to figure out what happens when you send a pregnant rat into space. In one of his studies, which involved sending pregnant rats aboard shuttle missions, he and a team of researchers found that rats gestated in zero gravity failed to develop their vestibular system — the part of the inner ear that monitors balance and helps animals tell up from down.

Alberts says it’s hard to predict how closely those results would correlate to people — like all animal studies, it only provides an educated guess — but it does give reason to be wary of sending astronauts off to start space colonies.

“Based on precious little evidence,” Alberts told me, “there are reasons to be very cautious about deeming the pregnancy process fully safe [for humans in space] and reasons to expect some aspects of development to be affected by microgravity.”

Alberts’s research is part of a larger web of studies on animal reproduction in outer space, conducted by scientists in the United States and abroad. Other scientists have studied the reproductive outcomes of geckos, birds, fish, salamanders, even sea urchins in space. While it seems like we’ve have sent an entire zoo into space, April Ronca, a scientist in NASA’s Space Biosciences Research Branch, told me the cumulative knowledge we’ve gained from these studies is still virtually zilch.

What we do know is that of the many stages of reproduction — conception, gestation, prenatal development, birth, lactation, and development to adulthood — extraterrestrial conditions could potentially affect all of them. Cosmic radiation, for example, might deplete sperm count and quality to the point of making conception impossible altogether. Lack of gravity, too, has been shown to decrease sperm count, increase sperm abnormalities, and reduce testicle size. In one study, after six weeks in microgravity, male rats’ testes had shrunk so much that they could no longer produce sperm at all. Radiation can also damage women’s reproductive organs, leading to a higher chance of developing ovarian or uterine cancer and potentially affecting fertility. (Findings like these, while mostly speculative, have concerned NASA enough that it now offers sperm and egg freezing to astronauts before going on a mission.)

Other research has suggested that while fertilization can indeed occur in zero gravity, embryos don’t always develop properly. A study by Japanese researchers found that embryonic cells didn’t divide and mature without gravity, and exposure to radiation could potentially lead to birth defects. Another study —  which points out that “the fetus cannot exercise like an astronaut” — hypothesized that the absence of gravity would prevent a fetus from developing normal physiology, shrinking the baby’s leg muscles, elongating its bones, and engorging the left ventricle of the heart. The result would be an infant suited to floating around in a space shuttle, but who might never be able to sit, stand, or walk.

Besides developmental risks, there’s the question of delivery. Ronca pointed out that so far, no mammal has given birth in space (instead, assisted deliveries like Cesarian sections have been performed on animals after a pregnancy in space) so it’s impossible to know if a natural delivery is even possible. Microgravity has a weird way of reshaping the body — including loss of muscle mass and bone density — which could make it harder for a pregnant woman to push a baby out. One study of pregnant rats found that gap junctions, or the communication pathways between cells that signal contractions, were weaker in the pregnant rats who’d gone into space, making it necessary to have assisted deliveries rather than natural ones.

Even if an infant could survive a space pregnancy, outer space isn’t exactly the ideal environment in which to raise a kid. Looking to the rats again, those aboard a NASA mission in 1998 died in alarming rates due to problems with feeding, waste removal, and caging on board the shuttle. And the harsh environment outside of Earth — think extreme temperatures, high levels of radiation, and the lack of gravity — could make it hard for an infant to remain healthy or reach normal developmental milestones.

Still, scientists haven’t ruled out the possibility that one day, we may create intergalactic conditions suitable for reproduction. By some accounts, we could be living on other planets in a decade or less, which would eventually create the need to reproduce to sustain the population.

Still, Ronca told me, “at this time, we know so little about spaceflight and reproduction. Extensive studies would need to be done before speculating on this.”