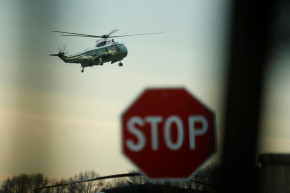 Trump's disastrous Yemen operation "has ignited the flame of jihad"

Trump arrives in Dover to greet the remains of the fallen U.S. commando — REUTERS
By Gilad Shiloach with Amit Weiss
Feb 06, 2017 at 6:53 AM ET

The botched U.S. counter-terrorism raid in Yemen last week that brought President Donald Trump his first military death since taking office has re-energized al-Qaeda in the Arabian Peninsula, which is using the operation to ignite “the flame of jihad” again.

U.S. Navy SEAL William “Ryan” Owens was killed during the operation targeting the Yemeni branch of the terror group, alongside 14 militants and reportedly 11 women and children.

Al Sahab Media, the main propaganda wing of al-Qaeda, released a statement on the raid in Yemen, calling Trump a fool who has once again roused Muslims to fight the West. In the statement, published on social media, al-Qaeda directly links Trump’s inauguration speech and his promises to eradicate the Islamic terrorism, with the Yemen raid. It warned that Trump’s threats “are directed against the Muslims in general, whether they are men, women, and even children.”

The leader of al-Qaeda’s branch in Yemen said the “Crusader raid” failed and was a “painful blow to the fool in the White House who didn’t learn from the past.” In the audio recording published by al-Qaeda in the Arabian Peninsula (AQAP), Qassem al-Reemi claimed 25 people were killed in the U.S raid, and threatened the U.S., saying “Muslims around the world had now witnessed the intensity of the hatred of the Crusaders towards Muslims.” He called upon supporters to “burn the land underneath America’s feet.”

Social media accounts affiliated with AQAP published graphic images allegedly showing children who were killed in the raid, saying “America is assassinating children,” and accusing the U.S. of barbarity. On Telegram, channels affiliated with al-Qaeda celebrated Trump’s “failure in the first military operation he had ordered.” One person asked: “Will history record that the first killing of America soldiers in Trump’s era was in Yemen?”

U.S. military officials told Reuters that Trump had approved the mission without sufficient ground support, intelligence or preparations for the SEAL team, which found itself landing in the middle of an al-Qaeda base that was defended by a larger number of fighters than expected.

President Barack Obama had held off on authorizing the mission before his term ended, purportedly because it was meant to occur on a moonless night, which would happen after Trump took office.

On Sunday the Iranian-backed Houthi rebels reportedly tested and fired a ballistic missile that struck a Saudi military camp west of the capital Riyadh. According to a statement published by the official Yemeni news agency saba, the missile was fired “in response to the continued America-Saudi aggression and its bloody massacres” against the Yemeni people and “more is yet to come and stronger.” The Saudi authorities have not confirmed the strike.