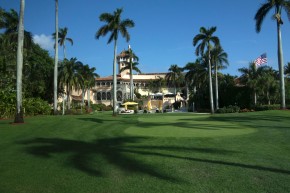 A group of students at Harvard Medical School have called on the school’s Dana-Farber Cancer Institute to move an upcoming fundraiser out of Donald Trump’s Mar-a-Lago Club in response to the president’s executive order banning visitors from seven Muslim-majority countries. Along with the American Red Cross and the Cleveland Clinic, Dana-Farber is one of several groups under fire for holding fundraisers in the Palm Beach, Florida resort that Trump has called his Winter White House, especially when the institute reportedly pays $150,000 a year to the Trump Organization for the privilege.

Medical student Colleen Farrell told Vocativ she felt moved to take a stand against holding a fundraiser in Mar-a-Lago after coming home from a protest of the executive order last Sunday. She said a fellow student in the class Facebook group brought to her attention Dana-Farber’s Trump connection, and Farrell and a few classmates wrote Laurie Glimcher, the institute’s president, asking her to move the event and requesting a response by Monday at 5 p.m. When Glimcher didn’t respond, Farrell posted a petition. In less than a week, the petition has gained more than 2,200 signatures.

“We’re not trying to protest Dana-Farber per se — we’re protesting their decision to have this fundraiser at Mar-a-Lago,” Farrell told Vocativ. She said the medical students’ decision to take action on this particular issue as opposed to, say, the efforts to repeal Affordable Care Act, was to some extent a matter of timing, but also because of Dana-Farber’s concrete link to the man who had signed the immigration ban. “This institution that I love was holding a fundraiser at Mar-a-Lago. I felt compelled to take a stand in my community,” Farrell said.

On Tuesday evening, Glimcher wrote back to the organizers, in which she shared Dana-Farber’s official statement on the matter. (When reached for comment, the Dana-Farber press office directed Vocativ to this statement.) According to emails obtained by Vocativ, she attributed the delayed response to the need for protracted discussion of what she called “a truly complicated and painfully difficult situation” for the institute. A follow-up email attributes the decision to a number of factors: that other groups in the same situation had also decided to stay put, that the only other venue in Palm Beach big enough to accommodate the event was already booked, and that cancelling the event would leave disgruntled attendees and cause significant losses in their fundraising efforts for new cancer cures and treatments.

Farrell said she was skeptical of these arguments. The Mar-a-Lago event does raise more than a million dollars, but that’s a minuscule percentage of the institute’s yearly fundraising, which runs in the hundreds of millions. Farrell also suggested Dana-Farber could recoup any short-term fundraising losses by taking a public stand against the Trump administration and the immigration ban, as suggested by the very different public responses to the ride-sharing companies Uber and Lyft. The former’s apparent effort to undercut the taxi strike at JFK International Airport led to a widespread online movement to delete the app, whereas Lyft’s million-dollar donation to the ACLU has earned the company plaudits and potentially new users.

“Sometimes when people put themselves out there and take a moral stand, there’s a lot of people who would be more willing to give money,” Farrell said, though she disputed the idea that money should be the deciding factor. “We don’t want this to just be about the money. This is about taking a stand.”

In her email to the organizers, Glimcher noted the club was booked months ago and so honoring the contract was not intended as a political statement — though it’s worth remembering Donald Trump first announced his candidacy and began making incendiary statements in June 2015, long before the 2017 event was booked. Glimcher also said these concerns would be taken into consideration when deciding whether to return to Mar-a-Lago for the 2018 fundraiser.

The organizers have decided to hold a peaceful assembly in support of immigrants and refugees on February 11 at the Harvard Medical School. The demonstration is intended to draw attention to Dana-Farber’s decision without disrupting any patient care. What disruption has already happened is as a result of the ban, which has left cancer patients from the seven affected nations unable to reach the United States and places like Dana-Farber for potentially life-saving treatment.

“These are not two distinct groups,” said Farrell. “Many immigrants and refugees have cancer. Many people with cancer are refugees and immigrants. Many physicians are immigrants.” And it’s for that reason most of all that Farrell rejects the idea that fundraising for cancer treatment matters more than taking a public stand against the president’s executive order.

“I object to the premise that we need to make sacrifices of moral principle on political issues that affect millions of people to help another vulnerable group,” she said. “I think we need to find ways of helping people that hold up the dignity of all people.”