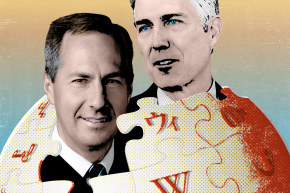 President Donald Trump is delivering his Supreme Court nomination in his typical showman fashion, summoning his top choices to Washington D.C. Tuesday night ahead of the scheduled announcement. While his team intends to keep the country standing by to see who gets the nod, Vocativ decided to do some digging.

A pretty good predictor of future news events, it turns out, is Wikipedia. As we found back in July when Hillary Clinton announced her running mate, Tim Kaine — thanks to a little trick uncovered by the Washington Post found back in 2008 — edit histories on the encyclopedia site can be a propitious tell.

The theory here is that Washington insiders working for sources in the know double down on any Wikipedia cleanup or additions necessary before a relatively unknown name splashed across the headlines sends the public looking for more information.

If that method proves to work once again in the case of the next SCOTUS nomination, it would seem that Neil Gorsuch, a 49-year-old judge out of Colorado, is your next nominee.

Of course, it’s tough to say just how reliable this approach in this case, especially considering that a great deal of the most recent edits made to Gorsuch’s page came from the the same IP address editing the page for Thomas Hardiman, the other potential choice. Plus, it’s always possible that — given Trump’s penchant for erratic, last-minute decision making — both judges’ pages are undergoing a lot of scrutiny, since both will be in the news after the announcement.

Edits to both candidates’ entries made within the past week were pretty major, delving into the two candidates’ personal lives, notable rulings, stances on issues like immigration, abortion rights, free speech, and religious freedom, and providing a general cleanup.

Gorsuch’s Wikipedia page, which now has 4.7 times as many words as it did Jan. 12, 2016, no longer features his book on euthanasia (which he does not support) as prominently. It now focuses much more on full scope of his professional accomplishments.

Gorsuch currently serves on the 10th Circuit Court of Appeals, where he made his name supporting an exception to the contraception mandate within the Affordable Care Act in the now-famous Hobby Lobby case. In many ways, his political viewpoints on other hot-button issues and approach to interpreting the Constitution as it was understood when it was written are similar to that of the late Antonin Scalia, whose seat he could fill.

Hardiman, 51, who currently serves in Philadelphia on the U.S. Court of Appeals for the Third Circuit (the same court where Trump’s sister currently serves as a senior judge), is seen as more centrist than Gorsuch.

Still, his Wikipedia page now notes that throughout the course of his career, he has worked against Department of Housing and Urban Development to reduce the number of low income homes in a Pittsburgh suburb, fought against the separation of church and state in the form of a courthouse plaque bearing the Ten Commandments, and sided with an anti-abortion protestor who refused to leave his post while violating a permit. Earlier on in the month, a much shorter version of Hardiman’s Wikipedia page featured only brief descriptions of notable cases and included now-missing details of his biography, like his work in private practice and his involvement with Big Brother Big Sisters of Greater Pittsburgh.