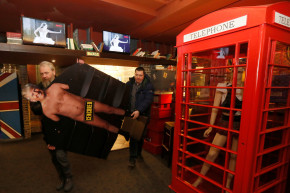 Shop owners were seen selling Russian nesting dolls decorated with Trump’s image, while a group of Russian gunsmiths have fashioned a two-pound coin bearing the slogan “In Trump We Trust”

Tokarev, a household name in Russia, has lived in New York for the past 25 years. Like many Russians, he was enthused by Trump’s unexpected rise to the presidency.

“I wrote this song just 20 minutes after I heard that Trump had won!” he told Vocativ after performing on a stage decorated with the Russian and American flags. “He is a genius! I want both America and Russia to flourish!”

Russia, where state media portrayed Trump as a courageous outsider fighting against Washington’s “anti-Russian” political elite, was the only country in the world whose citizens overwhelmingly supported the former reality TV show star’s presidential bid, according to opinion polls. When news of Trump’s election victory broke in November, lawmakers in Russia’s parliament burst into applause, and champagne corks flew.

Trump said during his controversial election campaign that he would consider scrapping crippling U.S. economic sanctions against Moscow, as well as recognize Russian rule in Crimea, which was seized by the Kremlin’s forces in March 2014. He has also cast doubt on Washington’s commitment to NATO, which he has called “obsolete.”

Shop owners in Moscow in recent days were seen selling traditional Russian matryoshka nesting dolls decorated with Trump’s image, while a group of Russian gunsmiths have fashioned a two-pound coin bearing the slogan “In Trump We Trust.”

In Moscow, the Russian Army designer clothes store, located directly opposite the U.S. embassy, was offering 10 percent discounts on all items in honor of Trump’s inauguration.

There was more champagne on Friday, when around 100 nationalists, Kremlin-connected figures and state media journalists gathered at a venue near Red Square to watch the inauguration ceremony. The event was organized by Tsargrad, a conservative Russian TV channel. Konstantin Rykov, an ex-pro-Putin lawmaker, said on social media that the event was in honor of the first phase of the “New World Order.”

“Trump will stand up for the interests of his own country, but he also respects our president and does not consider Russia enemy number one,” Maria Katasonova, a well-known ultra-nationalist activist, told Vocativ.

Pride of place at the event was a triptych of painting depicting President Putin, President Trump and Marine Le Pen, the right-wing politician who is one of the front-runners in the French presidential race. A cartoon depicting Trump as a Superman who would “lift America” was also broadcast on a large screen.

Trump’s inauguration speech, which was shown live at the event, was greeted with lukewarm applause however. The audience also ignored requests by organizers to stand up for the American anthem.

Some people at the event wore the Guy Fawkes masks made popular by global hacking movements in a jokey reference to U.S. intelligence claims that Russian cyberattacks were aimed at influencing the outcome of November’s election.

“It’s stupid to say Russian hackers were responsible for Trump’s victory,” said Filip Nikolsky, who also wore a hooded-top with a “You’ve Been Hacked” slogan. “Even if they tried something, this alone couldn’t have won him the election.”

But amid the euphoria, the Kremlin had words of caution on Friday. “Trump is not our man,” said Dmitry Peskov, Putin’s spokesman. “He is America’s man. He is the president of the United States of America.”

Many Russians were in no mood to listen to such sober analysis, however.

“America was an enemy of Russia for a long time. But now America has a president who says good things about our country and our president,” said Maria Ushakova, who organized Thursday’s inauguration party in Moscow. “This is worth getting drunk for!”