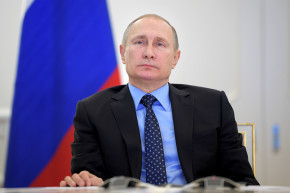 From Putin, A Pause In Retaliation Until Trump Is President
By Marc Bennetts

From Putin, A Pause In Retaliation Until Trump Is President

Putin declines to hit back at Washington's sanctions, choosing to bide his time until Trump is inaugurated

Putin is choosing his battles, refusing to react to the expulsion of his diplomats — REUTERS
By Marc Bennetts
Dec 30, 2016 at 10:54 AM ET

Vladimir Putin declined on Friday to retaliate in kind to the expulsion by the United States of dozens of Russian suspected spies, in a move that underlined the Kremlin’s determination to work with Donald Trump, the U.S. president-elect.

U.S. President Barack Obama ordered on Thursday the deportation of 35 Russians it said were engaged in intelligence operations in the United States. It gave the suspected spies and their families 72 hours to leave the country. Obama also ordered sanctions against two Russian intelligence agencies, the Federal Security Service (FSB) and the Main Intelligence Directorate (GRU).

Putin called the new round of U.S. sanctions an “unfriendly, provocative” act that was aimed at “further undermining” U.S.-Russian relations. “We will not create any problems for US diplomats. We will not expel anyone,” Putin said in a statement on the Kremlin website. “We will not resort to irresponsible diplomacy but will plan our further steps to restore Russian-U.S. relations based on the policies of the Trump Administration.” He also invited the children of American diplomats in Moscow to a New Year celebration at the Kremlin.

The sanctions were a response to an alleged Kremlin cyberattack ahead of the U.S. presidential elections. U.S. intelligence officials say the hack of Democratic National Committee emails was aimed at securing the White House for Trump, who has frequently spoken in praise of Russia’s strongman leader.

Hillary Clinton, the losing Democratic Party candidate, says Putin personally ordered the hack over what she described as a “personal beef” against her. Senior Republican Party lawmakers backed Obama’s decision to impose sanctions on Russia and called on Trump to continue to pressurize Moscow when he takes office on January 20. The Kremlin has called the claims “ridiculous.”

Putin’s statement came shortly after the Russian Foreign Ministry had asked him to approve the tit-for-tat expulsion of 35 American diplomats from Russia.

Putin’s decision not to expel the diplomats was interpreted by many analysts as both a rebuke to Obama and yet another signal that Russia wants to work closely with the incoming Trump administration. Both Trump and his pick for secretary of state, Rex Tillerson, have indicated that they will consider scrapping economic sanctions imposed by the United States against Russia in 2014 over its seizure of Crimea. The sanctions, combined with low global prices for oil, have plunged millions of Russians into poverty and eradicated many of the economic gains of Putin’s long rule.

“Russia is in a difficult position financially now, and Putin is trying to do everything he can to make it easier for Trump to take the first steps toward co-operation with Russia,” Alexander Konovalov, head of the Institute for Strategic Assessments in Moscow, told Vocativ.

Konovalov also said Obama’s decision to sanction Russia’s FSB and GRU intelligence agencies could endanger U.S. national security. “What if our intelligence agencies receive information about a terror attack in the United States?” he said. “Will they still be able to warn their American counterparts through the correct channels?”

Obama’s decision to expel the Russian suspected spies and also close two properties said to have been used by Russian intelligence services in New York and Maryland triggered a furious response from Russian officials.

Zakharova also accused the American news channel CNN of spreading “fake news” over a report that Russia would close a school for the children of American diplomats in Moscow in response to the expulsions. Russian officials say the Anglo-American School will continue working as usual.

The U.S. State Department also said the sanctions were a response to what it called the “harassment” of American diplomats in Russia that has included “arbitrary police stops, physical assault, and the broadcast on state TV of personal details about our personnel that put them at risk.”

Responding to the latest sanctions against Russia, Trump said it was “time for our country to move on to bigger and better things.” However, he also said he would meet with intelligence officials next week “to be updated on the situation.”