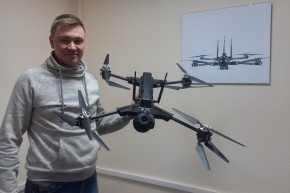 Crowdfunding War: How Ukraine Is Building Its Drone Army
By Michael Cruickshank

Crowdfunding War: How Ukraine Is Building Its Drone Army

In September, pro-Russian separatists from the Lugansk People’s Republic showed off a drone they claimed to have shot down over their territory. The absence of any real damage to the machine however suggested it had simply crashed on their side of the front line. But this isn’t what made the incident noteworthy.

Countless drones have been shot down or captured by either side in more than two years of war in Ukraine. What made this drone so different was that it was the first of its kind to enter the battlefield, originating from a new way of funding war.

The drone, identified as a PD-1, had come from the People’s Project. It had been paid for from development through to deployment by crowdfunding.

People’s Project was born out of the chaos in Ukraine following the Euromaidan revolution, which began as a wave of demonstrations in November 2013 and led to the Russian military invasion of the Crimea region the next year — along with pro-Russian uprisings in the areas of Donetsk and Luhansk. At the outset of the war, Ukrainian forces were poorly equipped by Western standards. Official military modernization programs remained slow, hampered by the country’s crippled economy and glacial bureaucracy.

More Could Ukraine’s War Finally Be Over?

Within this environment, volunteer groups began to emerge, bringing much-needed supplies and equipment to the troops. One group, made up of marketing and IT professionals, decided in 2014 to use crowdfunding to raise money to buy Ukraine’s soldiers military supplies.

“Me and my friends raised a lot of money for the Ukrainian army, but it was not enough, so we decided to create People’s Project […] firstly to bring more people together, and secondly to explain for whom the money would be used,” said Maxim Riabokon, one of the group’s founders.

Their platform, inspired by more well-known sites like Kickstarter and Gofundme, gives the user a choice of projects. Each project represents a finite item, series of items, or a service that People’s Project will supply the military. Every project has a status bar indicating how near it is to reaching its target funds.

The approach has been undeniably successful. With only 15 people on staff, they have managed so far to raise funds for both low-tech equipment like tank armor and Kalashnikov upgrades, all the way to high-tech devices like robotics and night vision scopes.

Not being military themselves, the People’s Project reached out to the military to find out the exact specifications of the equipment the troops most needed, Riabokon explained.

“We have people who have good contacts with commanders on the frontline and we ask them what they need. We analyse these requests, before also talking with the Ministry of Defense,” said Riabokon. He said the feedback from the front line has been “great,” but, as to how their contributions have been used on the battlefield, Riabokon says that is being kept secret.

After overcoming the initial challenges to provide the most basic equipment to troops, People’s Project soon aimed their sights higher.

Taking to the skies

Seeing the revolutionary role drones were playing in conflicts around the world, the group took it upon themselves to supply the Ukrainian military with drones of their own. The army did have some drones on hand, but they were very old and used mainly as targets for training. Some of the volunteer battalions used consumer drones bought on the open market in the first few months of the war.

“…even a toy copter with a camera saved many lives, allowing soldiers to locate enemy positions from the air,” said Jacob Cereteli from Ukrspecsystems, a company working with People’s Project on developing the UAVs (Unmanned Aerial Vehicle).

More Putin To Crimea: Do You Want Electricity Or Ukraine?

People’s Project considered consumer drones, but realized the unencrypted communications would be a massive liability to Ukrainian troops. Military drones, they found, were prohibitively expensive.

“After we tried to arrange a purchase of a real military UAV solution from several companies in Europe and U.S. […] our team decided to go to the next level and build a our own military UAV,” said Cereteli.

Starting from zero, and in under a year, People’s Project managed to crowdfund, design, develop and build not one but two classes of military surveillance drones. The first of these, the PC-1, is a lightweight and easily transportable quadcopter, able to provide battlefield surveillance for up to 40 minutes. The other, the People’s Drone 1 (PD-1) is an unmanned fixed-wing aircraft that can fly for five hours while beaming back live video from a height of three kilometers (1.5 miles).

During the development of these drones, People’s Project aimed to source as many of the components from within the country, despite Ukraine’s lack of experience in drone manufacturing. Moves to fit them with air-to-surface missiles were abandoned because the group couldn’t easily procure the weapons. Once a drone is built, it is provided to the military at cost-price.

One of the major ways in which People’s Project seeks to stand apart from Ukraine’s numerous volunteer groups is through its level of transparency. It keeps note of every dollar (or Ukrainian Hryvnia) that it spends and works to publicize as much of this spending as possible.

The group regularly runs audits into how their equipment is being used and where individual items end up on the battlefield. They discuss this openly on their site, which is how they discovered that a major reason they were losing equipment was because soldiers returning from deployment brought it home with them instead of leaving it for the soldiers replacing them.

There were other experimental failures. An attempt to produce a small robotic tank fell apart after disagreements with the manufacturer. A large multicopter drone creation was shelved after consultations with the military showed it was functionally useless.

Also, the limits of a crowdfunding approach became apparent as war-weariness set in. Despite ongoing deaths on both sites, the war is officially contained within a ceasefire agreement, and to the average Ukrainian, the situation is less critical than it was two years ago. As such, the pool of potential backers has lessened.

People’s Project still receives a steady stream of donations through their site, but they are now also turning to corporate sponsors for help to fund new projects. The group swears its support of the Ukrainian military will continue as long as the war persists. Even so, the group has already set a precedent for wartime fundraising.

Now, as war technology becomes increasingly accessible, it become anything, from an example for other activists to emulate to a new avenue of funding for terrorist groups.