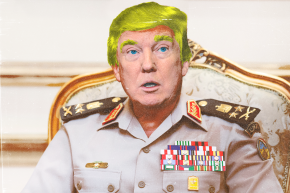 With every threat and every chastisement, the U.S. president-elect is exhibiting the same characteristics of Arab strongmen cracking down on media freedom

Most people would have viewed it as the most minor slight. Nearly all experienced leaders would have overlooked it. But the photo of Hosni Mubarak and the Belgian Foreign Minister, with the sole of Karel De Gucht’s shoe facing the then Egyptian president, insulted the Arab leader so much that he had the AFP photographer who took it permanently banned from the presidential palace.

Stories of heads of state interfering with the work of the media often crop up in seemingly trivial ways. But these interjections pave the way for more repressive measures, eventually threatening the foundations of a free press.

And they’re not just happening overseas: Last week, President-elect Donald Trump lashed out at the media — specifically NBC — for publishing unflattering photos of him that show his double chin. As a candidate, Trump was never shy about conveying his dismay for conventional media. Now, as the next president, he is poised to threaten it.

His ongoing rhetoric against the press and threats against specific outlets may seem novel and bold, especially to his supporters whose distrust in it has served as a rallying point, but nothing about these tactics are new. Before even moving into the Oval Office, Donald Trump has engaged in practices used by strongmen in other countries for decades — practices upon which more serious crackdowns are built.

Egyptian president Abdel Fattah al-Sisi’s rise to power initiated an unprecedented crackdown on press freedoms and dissent in general. Dozens of journalists were imprisoned and television channels and newspapers were shut down.

But Sisi has also engaged in softer forms of pressure in an effort to compel the country’s media to toe the line of the government’s narrative. He makes it a point of chiding the press during public speeches, usually when domestic crises come to the forefront of public discourse. “Media expresses state policy,” he said in an April address.

On a number of occasions, he has also invited prominent media personalities to the presidential palace, mostly to dictate what their role should be and what they should focus on in their coverage. He’s also taken these opportunities to criticize them for what they have chosen to focus on in their programs.

This film replayed itself shortly after Trump’s victory, when television anchors and executives met him at Trump Tower for an off-the-record meeting meant to focus on the future administration’s relationship in the media, but that reportedly descended into a Trump diatribe on his sustained animosity towards the press.

Mobilizing against a conspiracy

Trump’s campaign ran on the idea that the media has a role in some sort of conspiracy against him and the rest of the country. “The most powerful weapon deployed by the Clintons is the corporate media,” he said at an October rally in West Palm Beach. “Let’s be clear on one thing: the corporate media in our country is no longer involved in journalism. They are a political special interest.”

Playing on conspiracy theories warning of the threat of “globalists,” Trump managed to build on the idea that the media is a part of an organized plot to destabilize and disenfranchise the country.

In a similar fashion, Sisi has repeatedly warned Egyptians of “fourth generation warfare” (a term for war when one of the party’s in a non-state entity) he says is aimed at creating divisions in the country through the media. The president has stressed it enough that even the Egyptian Ministry of Defense has spoken of it as a grave threat, providing training courses for lawmakers.

In both cases, the threat to journalists does not only come from above, but also around. The environment at Trump rallies has made members of the press a target, and when given the opportunity, the candidate chose to inflame the hatred by pointing at cameras and singling out outlets.

Pro-Sisi rallies have also proven to be dangerous places for members of the media, since those who have bought into the threat of fourth generation warfare do their part in assaulting journalists and photographers.

Opening up the libel laws

Earlier this year, Trump famously claimed that he would “open up” the libel laws. “So when the New York Times writes a hit piece (which is a total disgrace) or the Washington Post (which is there for other reasons) writes a hit piece we can sue them and win money instead of having no chance of winning because they’re totally protected,” he told supporters at Texas rally in February. Trump has repeatedly threatened to sue outlets for “unfair” coverage and it became a central part of his campaign.

Official legal action to suppress undesired content has precedents in many other countries. It’s a tactic used by Turkey’s President, Recep Tayyip Erdogan, who has charged journalists (in addition to thousands of others) for insulting him. The Turkish president has attempted to draw a contrast between “criticism” and “insult” to justify the lawsuits.

The adverse effects of legal threats on the press are not limited to the court room. A report from the Committee to Protect Journalists likened such legal risks as “the sword of Damocles [hanging] over journalism in Turkey.” The threat of legal action can lead to self-censorship, especially in countries like Turkey, where legal ramifications have proven drastic.

When Trump is sworn in next month, he will not have the tools to systematically suppress the media the way in which rulers in other countries have. Journalists are not likely to spend years in detention without trial or to be killed by security forces. But his tone, before and after his victory, rings familiar to many who have worked in environments where working as a journalist comes with immediate and serious risks.