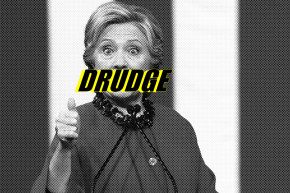 ‘$HRILLARY:’ How Matt Drudge Won The 2016 Election
By Ethan Harfenist

In an election cycle when just about everyone got it wrong, Matt Drudge ended up vindicated. The editor of the massive, conservative news aggregation site spent much of the last 18 months leading with those rare polls and stories that predicted a Trump victory — meanwhile the Huffington Post, sometimes called Drudge’s liberal mirror, gave Hillary Clinton a 90-something percent chance of winning just hours before the polls started closing.

In the aftermath of an election when just about every major outlet seemed to misread Donald Trump, and when fake and factually dubious news flooded the web, sites like the Drudge Report raise a chicken-and-egg question: Did Drudge and his conservative ilk just get it right, or did they play a more active role, driving a negative (and sometimes made-up) narrative about Clinton that helped cost her the election?

Ever since it broke the Monica Lewinsky scandal in 1998, the Drudge Report has maintained a unique place in the American news media landscape. The site, according to Quantcast, attracts over 24 million unique monthly visitors in the U.S., many of whom flock to the bare-bones page to devour its scandalous and sensational content. The aggregator puts a conservative spin on mainstream stories, and then veers into questionable territory — including a tabloid story about Bill Clinton’s allegedly illegitimate child and claims that longtime Clinton family confidante Sidney Blumenthal beat his wife (Blumenthal eventually took Drudge to court over the story).

But this year, Drudge had an almost singular focus: eviscerating Hillary Clinton. Along with linking to coverage of well-reported scandals, including Clinton’s use of a private email server as secretary of state, Drudge also spotlighted some very controversial stories.

Long before Hillary Clinton stumbled at a 9/11 memorial event (she later turned out to have pneumonia), Drudge obsessed over the idea that she was in poor health. In August, he published a photo of a staffer holding Clinton’s elbow as she climbed up some stairs, concluding the candidate was too ill to walk unaided. The photo, which was shared thousands of times by right-wing pro-Trump social media accounts at the time, was several months old and taken out of context — and Clinton, of course, was repeatedly shown to be in excellent health by doctors. Yet, many credit Drudge with making Clinton’s health an issue on the far right.

From July 1 to November 2, Vocativ collected data from the Drudge Report’s archive related to the 2016 election. Scraping searches for “Hillary” or “Clinton” and a set of election buzzwords from headlines and URLs, we calculated how often Clinton’s name was mentioned along with a specific scandal.

Perhaps unsurprisingly, Clinton’s name was tied to the word “emails” in roughly 23 percent of the links in the data set — the most mentions by far. Clinton’s campaign was marred by a constant stream of leaked emails, with whistleblowing site WikiLeaks handling much of the dumping and FBI chief James Comey announcing an additional review just days before the election.

For Clinton supporters, the emails themselves aren’t that damning (no wrongdoing was ever proven), but they look substantial compared to the rest of the list. “Bill Clinton’s affairs” occurred in 9.3 percent of the links. And below that, three issues — “Hillary’s health,” “Clinton Foundation,” and “DNC” — all hovered around the 4.5 percent mark.

It is worth noting that we just looked at stories that mentioned Clinton — not whether they were positive or negative (though any consistent Drudge reader will know anecdotally that the possibility of a positive story about Clinton appearing on the site is virtually nonexistent).

Robert Hernandez, a professor of journalism at the University of Southern California, told Vocativ that sites like the Drudge Report underscore how difficult it is to navigate today’s hyper-partisan media landscape. “Truthfully, going through this election as an informed citizen, as an informed journalist, it was hard, and it is still hard to find what is true and factual,” he said, adding that the increase in sensation- and conspiracy-peddling news site and pundits are amplifying the problem.

But although the data deals with Clinton, Hernandez says that on the flip side, many sites also figured out how to effectively increase traffic and clicks by constantly reporting on Trump and creating a feeling of anxiety and fear around the election. “It’s such a polluted and diluted space, this journalism ecosystem, that it’s an extreme challenge for an informed citizen to stay informed,” he told Vocativ.