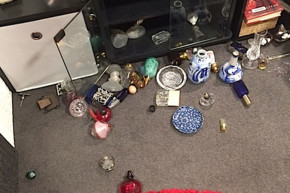 Belongings dislodged due to a quake lay in a New Zealand home. — REUTERS
By Sarah Lynch and Mor Turgeman
Nov 13, 2016 at 1:24 PM ET

The earthquake hit the northeastern coast of New Zealand’s South Island and was followed by several other smaller quakes in the area, according to the U.S. Geological Survey. The Pacific Tsunami Warning Center said several tsunami waves were observed at locations in New Zealand, measuring between 8.2 and 0.4 feet high.

After warning that bigger waves could still be on their way, New Zealand’s Ministry of Civil Defense and Emergency Management said the tsunami threat had been downgraded “to a marine and beach threat for the East Coast of New Zealand, from East Cape to Southland, and also the Kapiti Coast and Tasman Bay/Marlborough Sounds.”

Stay off beaches and away from the water until the tsunami warning has been cancelled. Unusually strong currents will continue. #eqnz

The Pacific Tsunami Warning Center said a “tsunami threat beyond New Zeland is not expected.”

Prime Minister John Key said two people died, The Guardian reported. Emergency response teams were sent in helicopters to the area at the heart of the quake, according to Reuters.

As the situation developed, some posted about heading for higher ground:

Evacuated to sister’s house on the hill #eqnz #tsunami pic.twitter.com/p7hXrpPNR3

Others took to social media to post pictures of damage. The hashtag #eqnz was posted more than 30,000 times in the hours immediately following the earthquake.

Too many earthquakes in my life. Time to move! #earthquake #nz #wellington #thankgodforinsurance