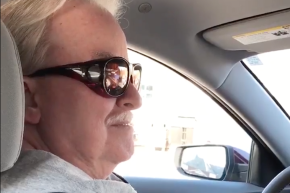 The ‘You’ve Got Mail’ Guy Is An Uber Driver Now

Hearing that chippy greeting probably still brings you a little thrill, even years after the world ditched their AOL inboxes in favor of Google’s mainline. But it used to be the universal signal that something fresh and potentially fun awaited you online, and hearing it brings us right back to those more innocent times.

So perhaps we shouldn’t be surprised that a passenger recognized a familiar voice during an Uber ride.  On Saturday, passenger Brandee Barker made the connection, and sure enough, it was him. As it turns out, Elwood Edward — the man behind the iconic notification — was all too pleased to give Barker an in-person performance.

OMG OMG my @Uber driver in Ohio was the You’ve Got Mail voice Elwood Edwards!!! I made him say it in this video #GOTVforHRC pic.twitter.com/Jgcl7v040D

Edwards, who used to be a broadcast announcer, got the job after his wife, who then worked at the company before it became America Online, put him up for it. He seems to get a kick out of his very specific fame, and if you end up in Ohio and need a ride, he’s your man. Of course, if you’re ever really jonesing for a reprise and can’t hop on a plane, you can always dig up the password for your old AOL account, where he can still be found alerting users of incoming correspondence.