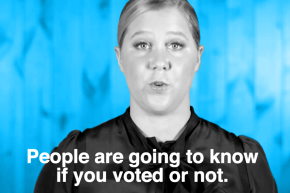 While voting remains an important civic duty, the arguments for doing so aren't always correct

This election season, some groups are threatening that a wrong vote might send you to hell, but an arguably far worse fate is being publicly shamed for not voting at all. At least, that’s the message of a few pro-Hillary PSAs from the likes of Will Ferrell and Amy Schumer that have been circulating in the days leading up to the election. Both videos warn that if you don’t vote, everyone will know — your voting history is public record, they claim. But how public are voting records? And is voter shaming even effective?

In the Will Ferrell PSA, the actor, comedian, and “typical run-of-the-mill Millennial” addresses the camera to rap with viewers, just “one vibrant youth” to another about how important it is to vote. “Our voting history is public record,” he says in the video. “Yeah, that’s right, bae.” This means your fellow Millennial friends (or worse, your parents) can see whether you’ve ponied up to the polls or not. “If you don’t vote,” he says, “everyone might find out that you’re the opposite of on fleek.”

Amy Schumer took a similar tact in her Hillary PSA about voting, reminding viewers that voting is public record, and anyone who knows you can “look that shit up.” But can they?

“You can’t just call and ask if someone voted,” says Emily Schwartz, the vice president of organizing at software company NationBuilder, who sells and maintains an aggregate of the national voter file. “You can make a public request to receive the voter file of the county—once that county has been updated. Some counties update that daily. Some, it takes them three to six months for that to be completely up to date.”

And you’d need some information—you’d have to know where the voter in question is currently registered to vote. And you couldn’t just call up and get the information on an individual—you’d have to request the whole voter file.

That would also cost you, depending on the state or county. Election administration varies by state, so in some cases it’s free, and in others it’s hefty. Alabama’s voter file costs $30,000, according to NationBuilder. North Carolina, Ohio, and Washington are free downloads online. Voter records in San Francisco county cost all of 75 cents. Arizona’s records are available county by county, and in whole, they add up to almost $28,000. (NationBuilder adds that you have to be a political entity to access that file in Arizona. )The Times reported that Pennsylvania charges $20 for a spreadsheet of their entire voter file, while Wisconsin charges $5 per 1,000 voters.

It’s also possible the voter file you’ve requested isn’t accurate. Recent Pew Research found that the absence of a public voting record for an individual doesn’t mean they didn’t vote. 35 percent of those aged 18 to 29 said they voted in Pew’s survey, but had no record of voting. Certainly it’s because some people are lying, or “over reporting” a good behavior. But voter files may not be up to date for people who move a lot and are still on voter files where they don’t reside. Schwartz says that if you lived in a previous state and moved, you could still be on its voter roll, so even if you’re voting in a new state, you’d still show up as a non-voter in previous districts.

The Help America Vote Act of 2002 requires states to keep an interactive computerized list of registration information. California doesn’t keep state voting records, only individual county files, for example. And while some individual states have put its voter files online, that’s still more of an exception rather than the rule. Oklahoma offers badvoter.org for searching the voter file, and North Carolina offers a statewide searchable database to find out who’s doing their civic duty as well.

But there is no national database anyone can zip over to and plug in a name. At least, not anymore. In 2015, one such database appeared briefly online comprised of 191 million voter records. According to a report by the New York Times, no one knew who posted the data or where it came from. Though all of the information was certainly publicly available, the Times wrote that its availability compiled all in one place was a major privacy concern because the data could be used for extortion, phishing, and identify theft—what one privacy expert called a “Christmas gift for thieves.”

But when asked if the lack of a national database makes sense given those privacy concerns, Schwartz says that isn’t quite right. “The voter file itself is about as useful as a phone book,” she said. “It’s roughly the same amount of information, and it’s in these typically large datasets, so you have to have some sort of technical skill set to search through a lot of that.”

It’s more that because there’s no federal oversight in the local administration of election information, the management of the information remains “in the same technological era as the local government itself,” she said. “We just have a pretty antiquated voter system, and it’s all been held at the state level, while the technology around voter turnout has really been pushed by campaigns, the actual voting system and technology has not. Some [voter files] are quite easy to come by and quite easy to search; others are in a PDF.”

And the information held within varies—typically, they include first and last name, polling location, party affiliation, and sometimes, recent addresses or phone numbers. California’s voter files does include phone numbers, Schwartz said, but most do not.

That said, there’s proof that when campaigns have used voter file data to shame citizens into voting, it does work. In 2006, Yale researchers tried a mailer-based study of 180,000 Michigan households (344,000 registered voters) to see if it impacted voter turnout. There were three groups in the experiment: One group received no mailer, another received a mailer simply encouraging them to vote, and another encouraged them to vote, and included whether that person had voted or not in the previous election. Those who were only encouraged to vote increased turnout by 4 percent; those who were reminded of whether they’d voted in the past increased it by 6.3 percent.

Other groups have tried various tactics that have at least succeeded in greatly angering their targets. In 2014, a campaign in Colorado and Alaska sent residents mailers comparing their voting history to their neighbor’s, even threatening to send a follow-up report card to neighbors indicating whether you had cast your vote this time around.

“WHAT IF YOUR FRIENDS, YOUR NEIGHBORS, AND YOUR COMMUNITY KNEW WHETHER YOU VOTED?” the mailer read, according to one resident, followed by a list of 11 neighbors’ names and whether they’d voted, and a promise to update the list come that November.

There was also Oregon’s Did They Vote campaign, which was presented as an app you could use to identify Facebook friends who hadn’t voted and then publicly shame them for it. The companion website, didtheyvote.org, appears to be defunct, though. (Requests inquiring about its current status were not answered.)

This disparate system of record keeping is why organizations who put in the legwork to organize the data are in business. But the antiquated system keeps voter histories more obscured than these PSAs make it seem. So while Will Ferrell and Amy Schumer are right, it’s not quite that simple. “It’s more complicated than just going and Googling,” Schwartz said.

But despite the faulty messaging, none of this is to say that the general push to get people to vote is wrong. You can just go into the booth on Tuesday, comforted by the fact that your family, friends, and enemies won’t be able to effortlessly Google what you did and didn’t vote on.