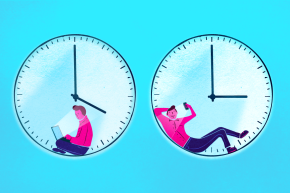 Americans Use Extra Hour To Mess Around Online
By Arielle Pardes

Americans Use Extra Hour To Mess Around Online

Daylight Savings Time hit this weekend, but that extra hour is not as good for productivity as you might think

It doesn’t take a peer-reviewed journal article to confirm that people spend a lot of time dicking around on the internet when they’re supposed to be doing work. Like, a lot of time. If you were to venture into the research, you’d find that cyberloafing—sometimes called goldbricking, cyberslacking, or simply wasting time online during hours allotted for doing something more productive—accounts for somewhere between a couple hours to a staggering 80 percent of the workday. And there’s good reason to believe that changing our clocks just makes it worse.

On the day after daylight savings time begins in the spring, there’s a spike in this kind of online procrastination. In one study from 2012, researchers found that cyberloafing (as measured by entertainment-related Google searches—think cute kitten videos or BuzzFeed quizzes—culled from six years of data) increased by 3 to 6 percent the day after the clocks changed. When they repeated the study in a lab setting, they found that for every hour of sleep lost, participants messed around on the internet for roughly 20 percent of the time they should have been working.

David Wagner, an associate professor of management at the University of Oregon and a co-author of the study, told me that this basically boils down to reduced functioning of the pre-frontal cortex from loss of sleep — even if that loss only amounts to about an hour. “Given the pre-frontal cortex is responsible for executive functioning, short sleep can result in difficulty with self-control, complex reasoning, future planning,” he said. “With regard to cyberloafing, the self-control deficit is what seems to have the biggest effect. People are continuously tempted to slack off and this is what they do when they lack the self-control or self-regulation to stay on task.”

More Napflix Is The Netflix That Deliberately Puts You To Sleep

So when we move the clocks back in the fall — like we did on Sunday — gaining back that hour, we should have a boost in productivity, right? Not exactly.

“We gain an hour, but my research indicates that we don’t typically use that extra hour for sleep,” said Christopher Barnes, an associate professor of management at the University of Washington, who also co-authored the cyberloafing study. “I speculate that people are probably just watching an extra hour of TV.”

At best, Barnes told me, there’s no discernible benefit to sleep, productivity, or health from setting the clocks back. At worst, there’s some kind of subtle disruption that annoys us when we gain an hour in the fall and completely wrecks us when we lose an hour in the spring. Even in November, when we gain the hour, we still experience a kind of “circadian jet lag,” according to research published in the journal Sleep Medicine Reviews, which still results in net sleep loss even though there’s an extra hour in the day.

Barnes’ study found that while individuals might cope with this disruption by spending just a few extra minutes watching stupid videos during the day, “the shift to daylight saving time results in a dramatic increase in cyberloafing behavior at the national level.”

People already waste an incredible amount of time on the internet — spending time at work not doing work has become something of an art — so even moving the needle ever so slightly adds to what is already a major productivity deficit. In general, cyberloafing supposedly costs employers billions every year; the time spend on social media alone is estimated to cost $650 billion annually in lost output. But in the days following the daylight savings time change, the study points out that “productivity losses from a spike in employee cyberloafing are potentially staggering.” By some estimates, the loss of productivity could add up to $434 million on the national scale. That’s $434 million, in the time it takes for the clock to change one hour.

And it’s not just productivity that’s lost: Loss of sleep from moving the clock forward — on average, about 40 minutes that Sunday night — can disrupt someone’s mental state enough to increase work-related accidents and decision-making. (In a new study, which has yet to be published, Barnes and other researchers found that judges assigned harsher sentences in the days following the daylight savings time change in the spring.) Our cortisol levels, associated with feeling stressed, shoot up. One study found that in the week after Germans switch over to “summer time,” the equivalent to daylight savings, people feel inexplicably grumpy for a full week.

So why do we still do it? Many technologists, physicians, and management experts like Barnes and Wagner agree that daylight savings time has mostly outlived its purpose. The energy savings are marginal, if they exist at all; the change in daylight screws with farmers’ yields and livestock routines; even primetime television ratings suffer when the clocks spring forward. It makes people sleepy, and sleepiness makes people do weird things, both online and offline.

“The more I look at the data, it’s very clear to me that we should abolish the daylight-savings time policy,” Barnes told me.

Last year, a dozen states considered legislation to end the practice of changing the clocks, and this year, California introduced a bill to the same effect. (As of now, only Hawaii and Arizona opt out of participating in daylight-savings.) So there may soon be an end in sight.

But for now, there’s no promise that anything will change, except for that hour on the clock. Whether you spend that extra hour sleeping or surfing the internet, you’ve got our full permission to show up at work on Monday and cyberloaf away.