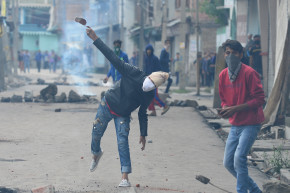 In Kashmir, Conspiracies Fester Under Internet Censorship
By Naheed Mustafa 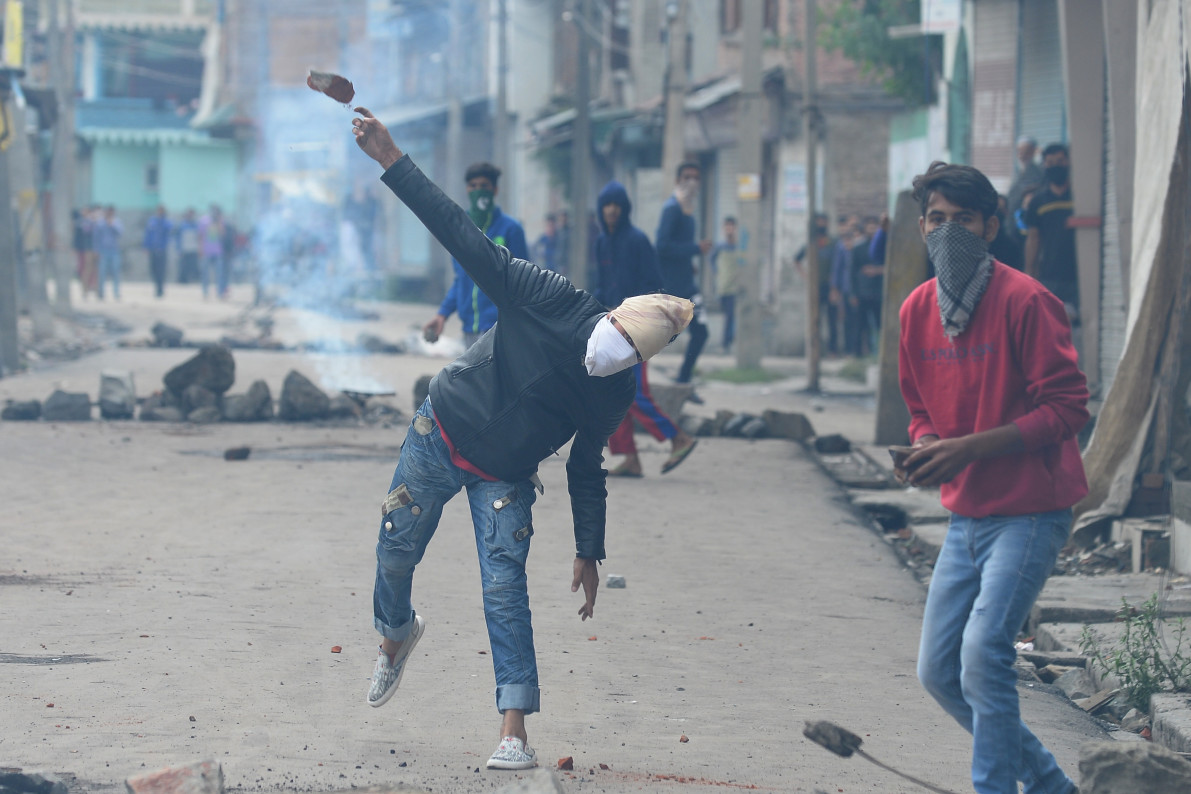 There is a video on YouTube that shakes and hiccups through 11-and-a-half minutes of the last rites for Burhan Muzaffar Wani. Thousands of men and women stand in a clearing surrounded by trees, straining for a final glimpse, a chance for a picture, a last opportunity to touch the face of Wani, a 21-year-old militant shot dead by Indian forces on July 8, 2016 in Anantnag District in the Kashmir valley.

The people sob and shout as Wani’s corpse, laid out on a cot, covered in an emerald green sheet, is jostled about. A hand reaches over from outside the frame to shove back the bandage wrapped around Wani’s forehead to reveal a still bloody wound. The crowd chants, “Azadi! Azadi!” An estimated 200,000 Kashmiris performed funeral prayers for Wani that day — 40 services, back to back.

The story goes that Burhan Wani ran away from his family in 2010 at the age of 15 and joined militants after being beaten by Indian security forces. He eventually went on to become commander of the Hizbul Mujahideen, a separatist group considered terrorists by the Indian state. Wani was immensely popular and made regular use of Facebook and WhatsApp to publish pictures and videos.

Maybe those who attended Wani’s funeral supported his Kashmiri separatist militancy. Maybe they didn’t. But their shouts of “Freedom! Freedom!” spoke to a desire felt keenly across the valley and its surrounding mountains that Kashmir is not for India.

Kashmir is split in two. Pakistan controls one part, India the other. The dispute goes back to the complicated partition of 1947, which gave birth to Hindu-majority India and Muslim-majority Pakistan. While Pakistan likes to present itself as a sort of caretaker of an aspiring Kashmiri state, referring to the portion it controls as Azad (Free) Kashmir, India considers all of Kashmir to be an integral part of the Indian nation. A UN-backed Kashmiri plebiscite on its future, something many observers say is now irrelevant, has been pending for nearly seven decades. During this time India and Pakistan have fought two wars and had a serious skirmish over who gets to claim ownership of the northernmost point of South Asia.

Kashmir is often called the most militarized zone in the world. Analysts suggest there are some 600,000 Indian troops present in the portion of Kashmir it controls. And with the recent uptick in violence, more are on the way. Human rights organizations have catalogued decades of ongoing violations from extra-judicial killings and torture to forced disappearances, mass sexual violence, political repression, and censorship.

The current round of violence was sparked by the killing of Burhan Wani but there have been other rebellions, other attempts at resistance, in 1989, 2008, 2009, and 2010. Each iteration of the Indian clampdown has generated a lasting symbol. In 2016 it is the bandaged eyes of civilians. Indian forces have used pump-action shotguns to quell protesting crowds. So far, nearly 1400 civilians have been partially or totally blinded by lead pellets. More than 70 people are dead since the protests erupted at the beginning of July. A daytime curfew was imposed on July 15. It was briefly lifted, and then re-imposed in a number of areas.

The implementing of curfews and all the attendant restrictions has contributed to the calcification of a simplistic narrative — i.e., that India is bringing order to a region plagued by violence fomented by outsiders. Kashmiris say widespread press censorship and information suppression prevents the world from understanding that their desire for independence is not pro-Pakistan terrorism but an indigenous and sincere demand.

Baba Umar, an independent journalist from Srinagar, says the Indian government claims the “uprising” is not indigenous even though everyone from laborers and fruit growers to doctors and teachers have rallied around the resistance. The All Parties Hurriyat Conference, a 26-member coalition that is the political face of Kashmir independence, issues a weekly protest calendar: a list of daily events like two-day sit-ins on the airport road in Srinagar, protesting with placards saying “we want freedom,” and playing independence anthems from mosque loudspeakers.

“Kashmir is witnessing mini Tahrir Square-type sit-ins and the world doesn’t know about it,” says Umar. “Indian media doesn’t know about it, locals don’t cover it because journalists can’t get curfew passes,” he says. These acts of resistance often deteriorate into violent clashes between security forces and civilians, which are then reported nationally as acts of foreign interference.

Whatever information is available is difficult to amplify because communication technologies are suppressed. Private internet services have been cut off leaving only government broadband available. Umar says it’s not uncommon for dozens of journalists to congregate in the home of one person with state-run internet service and post their stories and pictures to social media accounts and online news portals, turn by turn. Mobile phone networks were shut down and while postpaid service has recently been restored, prepaid users are still out of luck.

Umar says one consequence of the dearth of information and refusal of government spokespeople to comment is the prevalence of rumors and conspiracy theories. Kashmiri journalists fight curbs on press freedom not only for the principle but because the real life impact is that truth becomes secondary to gossip. Reporters are forced to push back on all kinds of falsehoods, from the mundane to the life threatening. Umar says in south Kashmir, where there is near blanket censorship, people rely solely on word of mouth for information whether it’s to find out if the curfew has been lifted or where they can buy milk.

Umar says there is also a flipside to the rumors: events that can be confirmed, like a raid on a village, end up over-reported and then fatigue sets in: “Soon enough, what may be extraordinary for a foreigner becomes a daily event for Kashmiris.”

The internet as a tool against radicalism

In the popular Indian imagination, the idea of Kashmiri-ness is inseparable from ideas about militancy. Kashmiris in Indian films, for example, are almost always terrorists invariably flying the Pakistani flag. In recent times they’ve been portrayed as simple happy people living peacefully in gorgeous mountain settings, free of political aspirations.  The attempt to counter those images by engaging online with a more sophisticated idea of what it means to be Kashmiri is new.

Sabbah Haji grew up in Dubai but returned to Kashmir in 2008 to run a school in her family’s ancestral village; the free public school, for which she raises funds online, has been the subject of a CNN International profile and the topic of a TEDx talk. Haji’s family is from the mountains and she says that while she may be separated from the daily acts of resistance in the valley, she is fully committed to Kashmiri independence. “There is a such a strong propaganda that except for those involved in the movement, everyone else here thinks those wanting azadi (freedom) are just funded by Pakistan.” The Indian mainstream media assume that every Kashmiri wants to align with Pakistan; but this, she says, is simply not true.

Haji points to Kashmir’s problem with connectivity as a key obstacle in changing the narrative about the region. The internet is relatively new for Kashmiris. Haji has cultivated a robust following on social media and uses her platform to talk about Kashmir in ways that are outside the militancy trope (she tweets primarily in English). Using humor and satire, her tweets and posts have become must-follows.

Haji says it’s challenging to navigate the Kashmiri online world, which is populated mostly by unsophisticated young men. “This is a huge problem because you try and spend time online to tell these stories but unfortunately you end up coming up against trolling and misogyny,” she says. Haji points out that Kashmir’s young people have grown up in the aftermath of the armed insurgency of 1989. The years since have been marked by widespread restrictions on civilian life, enforced disappearances, torture, and political suppression. In 2008, news came of mass graves all over Kashmir containing the bodies of the disappeared. “All these young people grew up with anger. They’ve lived with gunfire and crackdowns and having to make their way across danger zones. They unleash their anger online,” she says.

Haji is very careful about what she posts on Twitter and makes sure to space out her Kashmir tweets so she doesn’t overwhelm her followers. But she also points out her activism is only possible because she has government broadband at home. She also recruits volunteers who are “mainstream Indians” to work at her mountain school. It’s her contribution to educating Indians about life in Kashmir and depth and breadth of Kashmiri culture.

Haji says it sometimes feels impossible to change the Kashmiri story. Violence and censorship have consumed people’s lives and molded their identity. The spasms of violence that trigger media attention create a false impression of times of chaos and times of peace. She says people don’t understand that even in peacetime Kashmiris live with government surveillance. People are still arrested and detained, disappeared.

The ongoing repression, she says, has shifted the way ordinary Kashmiris interact with each other; they are wary, suspicious. It’s commonplace to assume one’s phone is tapped. Paradoxically, the surveillance and violence has also pulled Kashmiris together but it shapes their identity in ways that make it hard to separate out resistance from what it means to be Kashmiri.

She says it’s important for Kashmiris to share their songs and poetry which she calls fierce and beautiful. According the Haji, one thing that has helped significantly in the sharing of Kashmiri cultural heritage with the wider world is the growing number of people in the diaspora who are writing and creating art about where they come from. The more people are willing to engage with the idea that Kashmir can mean more than just insurgency, the better it will be for Kashmiris.

Baba Umar, the journalist, says if you visit the hospitals in Kashmir and talk to those who’ve been injured, they say once they heal they will pick up a gun. “They say we’ve resisted peacefully but the response to our peaceful protests has been the body bag,” he says. Umar worries that if the crackdowns continue and situation deteriorates, Kashmiris may pick up weapons again and it will be a return to the dark and brutal days of the past: “the jails are already filled up with people so the fear is gone. Kashmiris are not scared now.”