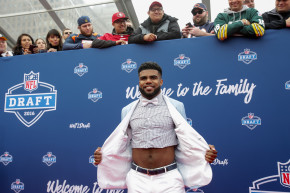 Ezekiel Elliott Is The Most Hyped Rookie In Fantasy Football History 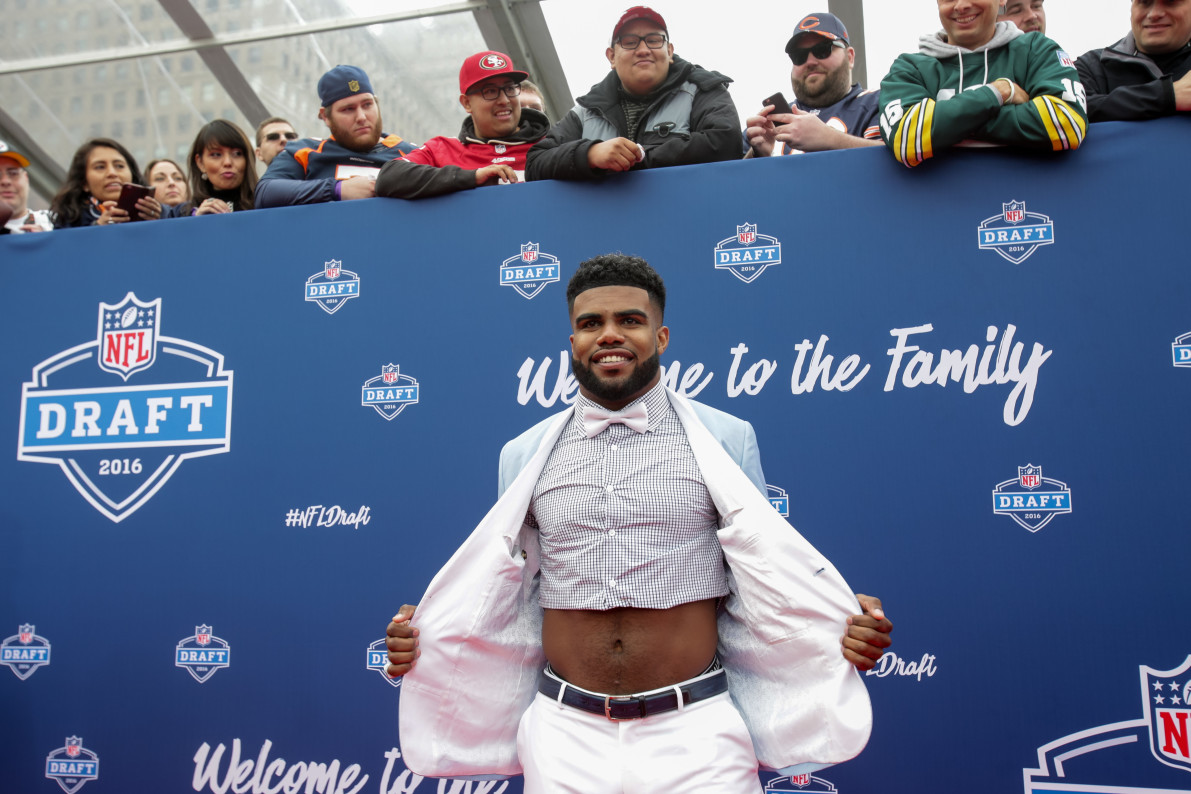 This outfit alone should disqualify him in fantasy football — Getty Images
By Jeff Andrews
Aug 25, 2016 at 4:58 PM ET

Former Ohio State running back Ezekiel Elliott was touted as the perfect fit in Dallas when the Cowboys took him with the fourth overall pick in the 2016 draft. The Cowboys have arguably the best offensive line in the NFL but lacked an elite running back last year because the team elected not to re-sign DeMarco Murray after his monster 2014 season. The thinking in Dallas was to put a potential superstar in Elliott behind the Cowboys offensive line and—as is always the case any time Dallas makes what looks like a good offseason move—watch the Super Bowl rings rain down like a North Texas thunderstorm.

The fantasy football world has bought this logic wholesale as Elliott is already considered one of the most valuable players in fantasy despite the fact that he’s yet to play a down in the NFL, not even in a preseason game. Yahoo and ESPN both have him ranked as the sixth overall player in fantasy, ahead of future Hall of Famer Adrian Peterson, reigning NFL MVP Cam Newton, and superstar receivers A.J. Green, DeAndre Hopkins, and Dallas’ own Dez Bryant. His average draft position on CBS is eighth overall, meaning fantasy owners are buying the ranking. DraftKings set his Week 1 salary at $7,300, the third highest for a running back.

This is easily the highest preseason fantasy ranking for a rookie in the history of pretend football. Rookie quarterbacks—even No. 1 overall picks like Jameis Winston—tend to be taken at the bottom of fantasy drafts because it takes a few years for quarterbacks to develop. Rookie receivers usually don’t start coming off the board until the middle of the draft. First-year running backs are thought to have the shortest learning curve of any position in the NFL, and in the recent past, rookie backs have been slotted as high as the second round in preseason fantasy rankings, but taking a rookie with the sixth overall pick, ahead of Adrian freakin’ Peterson? The Ezekiel Elliott hype train has no breaks.

"Bold: Ezekiel Elliott is the No. 1 running back in fantasy." – @PFF
I'm a Cowboys fan and I have a tough time believing this. Blind faith?

It blows my mind Ezekiel Elliott is already considered a first round fantasy pick. Not falling for that one.

Drafting Ezekiel Elliott in the first round of your draft is fantasy suicide. #fantasyfootball #NFL #NFLFantasy #FantasySports

Confused as to why Ezekiel Elliott is ranked 7 in fantasy

Some of the hype surrounding Elliott, from a fantasy perspective, is simple supply and demand. There are plenty of top flight receivers and quarterbacks, but very few feature running backs who get 20 or more carries a game. With the Cowboys claiming they want to be the run-first offense they were in 2014, Elliott could become one of the four or five true feature backs in the league, which alone would make him incredibly valuable.

The other part of the hype is that he’s playing in Dallas, where owner Jerry Jones peddles the notion that players get good just by virtue of having a blue star on their helmet, in addition to the idea that any old sack of potatoes can run behind the Cowboys stellar offensive line. They tested this theory last year with an aging Darren McFadden, who had a 1,089 yards and three touchdowns in a year where he didn’t take over the starting role until Week 7.

But Jerry has a history of selling running back snake oil to fantasy owners. After Julius Jones rushed for more than 800 yards in seven and a half games during his rookie season in 2004, the Cowboys bought billboards all over the Dallas-Fort Worth area that featured a picture of Jones and “1,800” written across it, a not-so-subtle suggestion that Julius was going to rush for 1,800 yards in his first full season. It was simple math, Jerry said. He touted Julius as the next Emmitt Smith (every new Cowboy is the next of his early 1990s counterpart to Jerry), but Jones cracked 1,000 yards only once in his short career.

Elliott is a fine prospect, but has never been considered the type of once-in-a-generation player that Reggie Bush and Adrian Peterson were tabbed as when they were in high school and college. Further, the returning McFadden and recently signed former rookie sensation Alfred Morris will challenge Elliott for carries. There are examples of rookie running backs putting up strong numbers in recent years, but there’s a Trent Richardson for every Todd Gurley.

These bits of context haven’t impacted Elliott’s fantasy stock, however. The first round of most fantasy drafts tend to mirror the rankings compiled by the website hosting the league, and with the experts high on Elliott, fantasy owners are gleefully taking the rookie running back in the first round, and in some cases near the top of it.

Take Ezekiel Elliott third overall in a fantasy football draft? I think I will.

Dude at my job said he taking Ezekiel Elliott with the #1 pick if he get it in fantasy. I feel it

BREAKING: Rumors have been confirmed that Texas Forever will select @EzekielElliott will the first pick of the draft.

Ezekiel Elliott is going to be a Top 3 fantasy RB. Lamar Miller will be Top 5.

As for the still unresolved domestic violence allegation against Elliott, no one seems too concerned about that, which is par for the course.