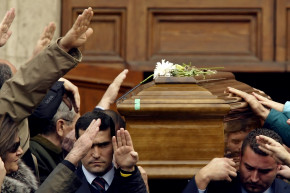 This Grocery Drives Itself To Your Door
By Ruby Nitzberg
ITALY

In recent months, Italian fascists have been finding one another online and forming communities that many see as dangerous 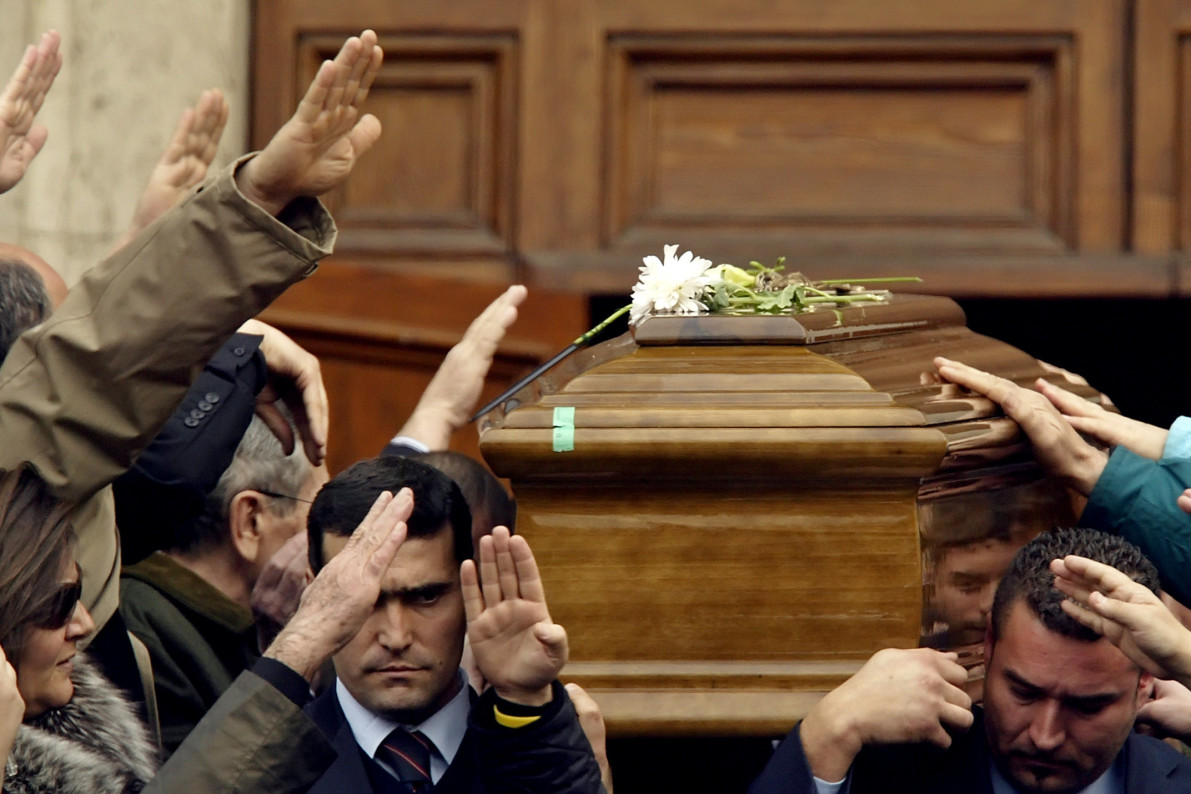 Benito Mussolini, the fascist dictator who ruled Italy from 1922 until 1943, was killed by a firing squad composed of his own countrymen on April 28, 1945. But while his death was widely celebrated by a populace largely disillusioned with fascism at the time after years of German occupation and the subsequent allied invasion, Mussolini’s popularity has recently surged on social media. His public profile on Facebook, where he’s listed as a “politician,” is currently “liked” by 102,000 fans.

Adolf Hitler, Mussolini’s fellow fascist dictator and one-time ally, has one of those inactive pages that is generated automatically by Wikipedia. But Mussolini’s Facebook account is active and updated several times daily, mostly with rants against Africans and Muslims. And this is not Il Duce’s only presence on the social network. Closed groups such as “Benito Mussolini, the man that made Italy great” and “Il Duce Benito Mussolini, unlike [i.e., better than] Italian politicians” enjoy thousands of members.

And there are other open Facebook pages dedicated to praising the fascist dictator. Among others, there are “Benito Mussolini, [our] eternal love” (over 26,000 likes, as of this writing) and “Being a fascist is not a crime” (almost 37,000 likes).

Expressing sympathy for fascism is a crime in Italy. Legislation introduced in 1952 makes it illegal to defend publicly either Mussolini, his regime or his ideas. The crime, defined as “apologia del fascismo” (apologist for fascism), is in theory punishable with as much of two years of jail. In practice, however, the law was rarely enforced. The proliferation of openly fascist pages on Facebook seemed to underline the authorities’ willingness to turn a blind eye to violations of this law, particularly when it comes to online activities.

Over the past few months, however, things have started to change. Italian authorities have begun actively monitoring fascist online communities, shutting down some pro-Mussolini Facebook groups and even bringing some of their members to court. The changes come at a time when Italy is dealing with its shock over a brutal racially motivated murder, an unprecedented event in a country that has no history of racial tension that is so well known in the United States.

It also comes at a time when security forces across Europe are increasingly monitoring online hate speech. Following a wave of jihadist terror attacks, from Brussels to Nice, often involving attackers who had self-radicalized on the web, authorities have come to see the spread of violent messages on the internet as a serious security threat.

“If we can learn a lesson from the horrible attacks in Orlando and Nice, it is that violent messages spread on social networks can really trigger violent acts. So I’m not surprised that authorities are tightening the grip also on fascist groups, as they are already doing with jihadists,” says Ugo Tassinari, author of “Fascisteria”, a book about neo-fascist movements, in a telephone conversation with Vocativ. He continued: “Today it’s ISIS sympathizers that pose the biggest threat, but they know that rightwing extremists might become dangerous too, especially now that anti-immigrant sentiment is on the rise.”

Early in July, a right wing extremist murdered a Nigerian refugee in Fermo, a small town close to Rome. The murderer, now in custody awaiting trial, had harassed the man’s wife, also a Nigerian, comparing her to an ape and leaving little doubt as to his racial motivations.

Italy’s government does not release specific figures about hate crimes, but the general perception is that anti-immigrant sentiment is growing. For instance, Italians have a particularly unfavorable view of Muslims (61 percent) compared to non-Muslim Europeans, according to a 2014 Pew survey. Far right parties are vocally xenophobic.

In this climate, perhaps, it is not surprising that authorities have become less lenient with online far right groups. In May, the Polizia Postale—the branch of the police previously in charge of overseeing the postal services and now focusing on the internet—shut down a Facebook group of Mussolini supporters called “Dux Nobis” (which means “Our Duce” in Latin). Its founder and some of its members have been charged with being apologists for fascism and are still awaiting trial. Earlier this year, another fascist Facebook group was shut down by the Polizia Postale. But many others are still going strong.

Some scholars question the effectiveness of closing online pro fascist forums. “It’s a very delicate issue of finding the balance between freedom of expression and the need to curb hate speech,” said Valentina Pisanty, a semiologist at the University of Milan. Pisanty studies Holocaust denial among right wing extremists, and is familiar with the fascist forums on social media platforms. “But,” she continued, “I wonder if shutting pages and websites down is effective at all. You close one and a new one opens. Plus, the people who really want to find fascist material, can easily find it on the deep web.”

The Chair of Italy’s Criminology Society, Isabella Merzagora, disagrees. “Online propaganda has proven a real threat, so closing these groups is a necessary step,” she said. “Sometimes being exposed to hate speech online is what makes makes troubled individuals become violent. We saw this with ISIS and we might see it with fascists as well. The two are not so different. In both cases, it’s about having an ‘included in the group’ and ‘excluded from the group’ mentality; it’s about seeing one’s group as superior and dehumanizing outsiders to the point that killing them no longer implies guilt.”

Ugo Tassinari, the expert in fascist movements, shares Merzagora’s view and asserts that social networks are particularly insidious in revitalizing fascism. “Here in Italy, we always had a big phenomenon of so-called ‘fascisti da bar’ [fascists at the bar], isolated individuals who like to rant about what a great man Mussolini was, how trains used to run in time with him,” he said. “These ‘fascisti da bar’ are way more numerous that organized far right groups, but until recently they hardly posed a problem because they were not really part of a community. Maybe there were two guys in a small town, another guy in a village, they shared their love for Il Duce but didn’t know about each other, so end of the story.”

Now, explained Tassinari, these geographically dispersed fascist sympathizers can form online communities. “The problem is that now, with social networks, the same people have started to talk to each other even if they are hundreds of kilometers apart,” said Tassinari. “It’s no longer about isolated individuals talking trash over a cappuccino or a glass of wine. They’re a community now. And they’re starting to become dangerous.”