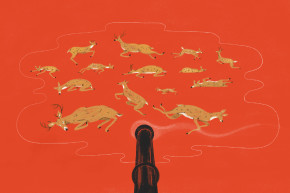 The Gun Show: Meet America’s Other NRA
By Jack Moore 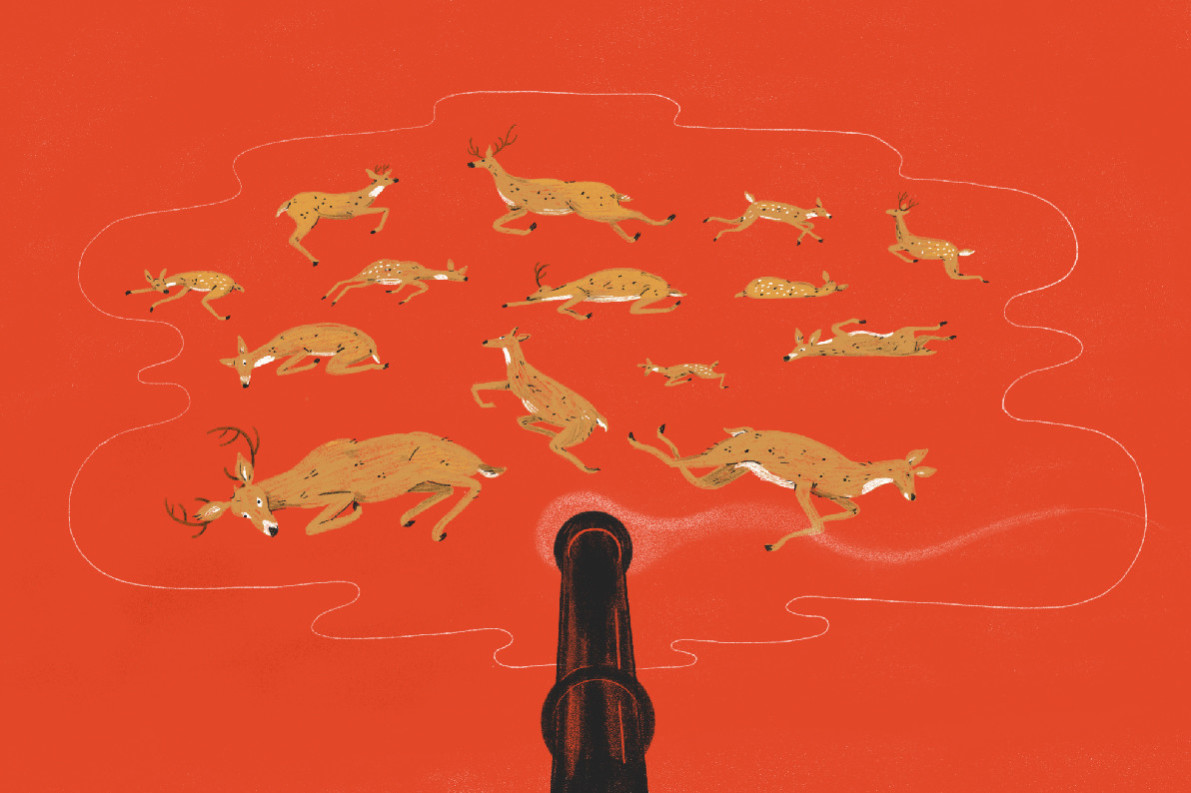 Don’t try to call the AR-15 an assault weapon around members of the National Sport Shooting Foundation, the organization that bills itself as “the trade association for America’s firearms industry. Our mission: to promote, protect, and preserve hunting and the shooting sports.”

“An assault rifle is fully automatic—a machine gun,” the NSSF claims in a fact sheet available on its website. “If someone calls an AR-15 style rifle an ‘assault weapon,’ he or she either supports banning these firearms or does not understand their function and sporting use, or both. Please correct them.”

This stance would presumably reflect the community of sport hunters that the NSSF purports to represent, but most hunters acknowledge weapons such as the AR-15 and accessories like expanded magazines are unnecessary for sport shooting of any form, whether it’s shooting deer from a tree stand in the midwest or hunting elephants in the Sahara. In which case, why is the NSSF so staunchly defending a right that its membership doesn’t care about? The answer boils down to the fact that the NSSF, just like the NRA, is beholden not to its members, but to the gun industry itself.

Aside from the NRA, the NSSF has been one of the most active groups lobbying to weaken gun control and ensure the American gun marketplace remains stocked with weapons like the AR-15—the same weapon used in the mass shooting at Sandy Hook Elementary School in Newtown, CT (which is coincidentally the NSSF’s home base) and the model that influenced the design of the Sig Sauer rifle used in the Pulse shooting in Orlando.

The NSSF has been particularly active in recent years. According to watchdog OpenSecrets.org, the organization has cumulatively spent $9,950,000 since 2013, every cent of which has been spent on lobbying for gun rights. Along with Safari Club International (SCI), which has chipped in $1.34 million in lobbying against gun control in that same span, groups representing those who shoot for sport—either competitive marksmen or avid hunters—have been turned into the biggest allies of the NRA and the companies that manufacture mass murder machines like the AR-15.

Lavon Wenger, a 75-year-old Kansas hunter who attended an SCI rally in 2011, told Newsweek he didn’t “really need a semiautomatic weapon. Who does?” But Wenger still opposed laws to restrict them. “Once you get started, where does it stop?” Wenger asked. “I’ve seen what’s happened in other parts of the world.”

In the same article, Dave Talley, a 74-year-old South Carolinian, admitted he wasn’t sure of the right answer regarding gun control, but that Safari Club International members are “nervous and touchy” regarding any potential new restrictions because they “don’t trust Washington politicians to stop.”

Former vice presidential candidate and noted hunter Sarah Palin was the keynote speaker at that SCI rally, which took place in Tucson, Arizona shortly after a mass shooting that killed six people and injured 15, including United States Representative Gabrielle Giffords. Toward the end of her speech, Palin said, “My heart of course aches for the families of those who lost their lives at the hands of a deranged evil criminal, OK. And like you I’m praying for the victims, for their full recovery, watching in amazement reports of Congresswoman Gabby Giffords, pulling for her, so thankful that her life was spared.”

But Palin wasn’t finished. “I’m knowing too, though,” she continues, “how important it is, for their sake, for America’s sake, that we do not allow the evil acts of one mentally deranged murderer [to] change America’s way of life.”

To that end, SCI has set up a super-PAC called the “Hunter Defense Fund” and SCI lobbyist Nelson Freeman told the Daily Caller, “We hope that every hunter, business that supports hunters, and other NGOs recognize that the Hunter Defense Fund is the First Line of Defense for Hunting.”

The NSSF claims in a fact sheet that “The term ‘assault weapon’ was conjured up by anti-gun legislators to scare voters into thinking these firearms are something out of a horror movie. These guns are used for many activities. In fact, the Colt AR-15 and Springfield M1A, both labeled ‘assault weapons,’ are the rifles most often used for marksmanship competitions in the United States.”

Actual hunters, though, aren’t buying this logic. Donald Macalady, a 73-year-old who hunts antelope, pronghorn, and white-tail deer in Kansas, Wyoming and Colorado, told Al-Jazeera America, “People who say they need magazines, they’re breaking the law. That law has been on the books for decades. That’s nothing new.”

Lily Raff McCaulou, an avid hunter, wrote in The Atlantic, “We sportsmen have done ourselves a disservice by allowing the National Rifle Association to become synonymous with gun owners,” and added, “I believe that most people are capable of understanding the difference between, say, a semi-automatic rifle with a high-capacity barrel magazine like the one used in Newtown and a pump-action shotgun. No respectable, law-abiding sportsman would ever hunt with the former.”

Still, SCI and the NSSF can be found lobbying against many of the same gun control bills the NRA fights. These organizations were allies against the Fix Gun Checks Act of 2013, the Assault Weapons Ban of 2013, the Stop Illegal Trafficking in Firearms Act of 2013—all bills meant to curtail the flow of guns like the AR-15 into the market, and none of which made it farther than the committee stage.

While the spending power of SCI, NSSF, and groups like them pales in comparison to the NRA, they wield significant economic power and have for years. As Erin E. Williams and Margo Demello noted in their book “Why Animals Matter: The Case for Animal Protection,” groups like SCI, NSSF, and Ducks Unlimited accounted for $2.5 million of the $40 million spent on lobbying by the gun industry from 1998 through 2004. In 2012, the Guardian reported that SCI and NSSF accounted for nearly $2.5 million of the $30 million the gun industry spent on lobbying and other political contributions that year alone.

These organizations want you to believe that they’re fighting for the little guy, the hunters with a pump-action shotgun or a basic rifle for use during the annual hunting season. But the average Safari Club International member rakes in more than $200,000 per year and 40 percent of its members make over $250,000 annually. The average member of SCI is not a rural hunter but rather somebody like Walter Palmer, the Minnesota dentist who shot Cecil the Lion in Zimbabwe last year (SCI suspended Palmer’s membership with the organization following the debacle).

Still, there are hunters who refuse to fall in line, like Jim Zumbo, who saw his career collapse when he wrote a column for Outdoor Life magazine in which he said of semiautomatic weapons like the AR-15, “I’ll go so far as to call them ‘terrorist’ rifles … We don’t need to be lumped into the group of people who terrorize the world with them.”

Outdoor Life apologized for his comments, removed his post, and “parted ways” with Zumbo. The NRA said, “Our folks fully understand that their rights are at stake,” and stated Zumbo’s situation proved millions would “resist with an immense singular political will any attempts to create a new ban on semi-automatic firearms.”

It all combines to show how those who purportedly fight for the rights of recreational shooters like marksmen or hunters only care about leveraging their concerns for the profits of the gun industry. Through scare tactics, organizations like NSSF and SCI have convinced their members any restrictions on assault weapons are an attack on their hobbies despite the fact that the guns and accessories SCI, NSSF, and other such organizations are fighting to protect have little to no use for the vast majority of their members.