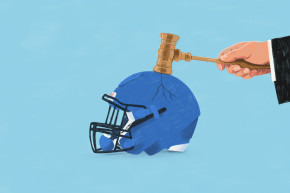 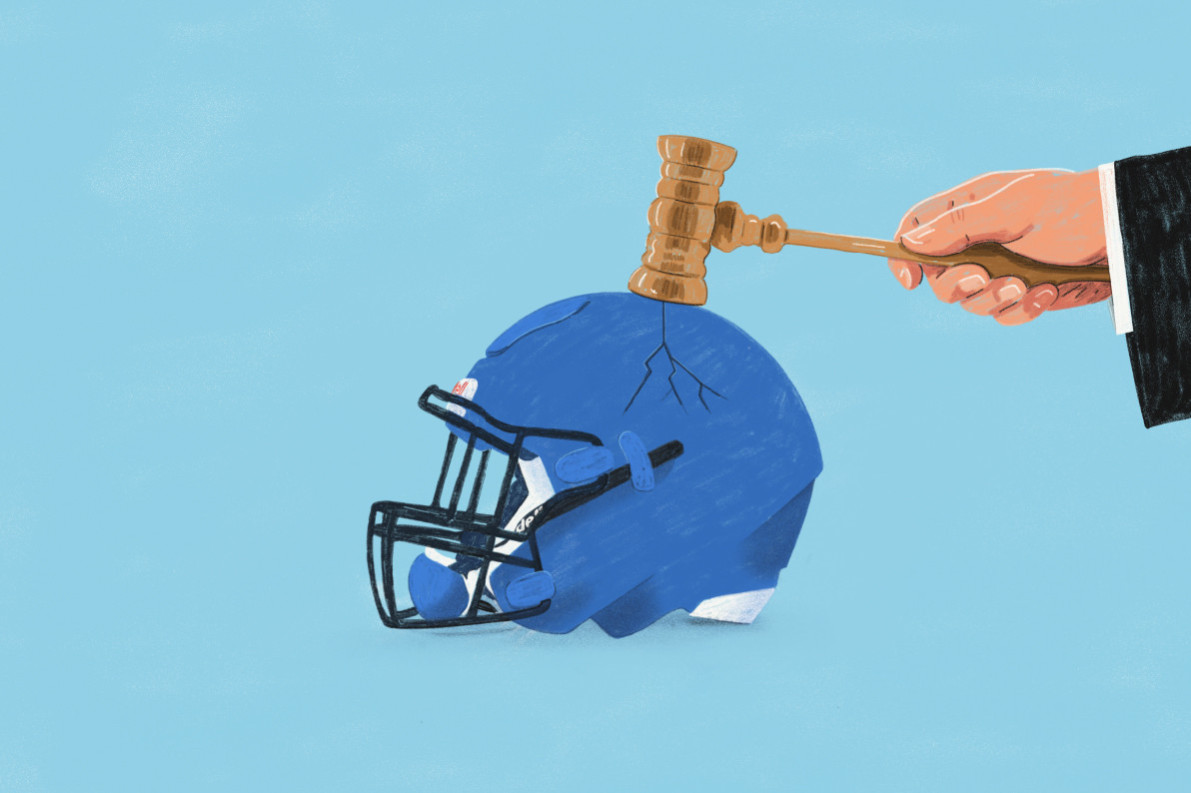 Helmet manufacturer Riddell is currently embroiled in a class-action lawsuit, and it boils down to the company not caring about brain trauma. Despite knowing since 1969—as recently unearthed documents showed—that helmets were incapable of protecting football players from concussion and other brain injuries, the company did not include warnings on its products until 2002.

For 20 years prior to that, helmet technology remained virtually unchanged despite Riddell’s knowledge that the helmets would not protect players from suffering brain trauma on the football field. A state of affairs that went on because Riddell owns a near monopoly over the helmet manufacturing industry. From 1982—when Riddell introduced their M155 helmet model—through 2002, when they started selling their first supposedly anti-concussion helmet, the Revolution, there was almost no change in the industry standard for helmets. The basic M155 design dominated the helmet industry for two decades, despite being wholly unable to protect athletes from traumatic brain injury.

Why did such a robust industry become so small? The answer is litigation, as the 1970s and 1980s saw a wave of lawsuits—largely from high school players—holding helmet companies responsible for injuries suffered on the gridiron.

In 1977, the Milwaukee Journal published a story headlined “Will Equipment Lawsuits Kill Prep Football?” documenting the trend of lawsuits holding helmet companies at fault for high school football injuries. A spokesman for the Sporting Goods Manufacturing Association (SGMA) told the Journal, “Within two years, there is a real possibility that no US manufacturer will be making helmets.” That year, his organization distributed a brochure that proclaimed “This is no bluff! Football cannot survive without quick action…”

The number of lawsuits against football helmet manufacturers had doubled in just three years, fueled in part by jury awards reaching into the millions. The Journal cites a 1971 case in which a Miami youth was awarded $5.3 million from Riddell. One ongoing case at the time of publication was seeking “unspecified damages equal to one-fourth of Riddell’s assets.”

The monetary damages suffered in court were problematic for sporting goods companies, but the rising insurance premiums as a result of the increased litigation were an even bigger factor in pushing firms out of the industry. Companies that were previously paying in the $1,000-$75,000 range for yearly insurance premiums were suddenly being charged as much as $400,000. “The cost of product liability insurance alone has increased for some from a fraction of a penny to six cents on the dollar.”

Football was not the only sport facing substantial litigation at the time. In 1978, Trial Magazine, the official publication of the American Association for Justice, devoted an entire issue to litigation in sports, ranging from professional sports labor disputes to the liability faced by swimming pool operators.

In an article discussing the potential for lawsuits against tennis court manufacturers for defective design (such as dead spots in hard courts causing knee injuries), authors Cheri Wyron Levin and Bruce L. Bortz discuss the success of such an argument against helmet makers:

In increasing numbers, football players, mostly those from high school teams, have successfully maintained suits against companies producing football helmets. The players chiefly have alleged head injuries which they blamed on their helmet’s inadequate safety features. An employee of the US Consumer Product Safety Commission spoke to the authors about one such case, though he repeatedly emphasized that the matter was one requiring ‘extreme delicacy.’

That case, now being appealed, involves a high school player from Dade County Florida, who sued the Rydell (sic) Company for paralysis caused, he claims, by an unsafe helmet. The jury returned with a $2.5 million award to the boy and $750,000 to his parents, all but ignoring the fact that the Rydell (sic) helmet in question had received a national safety seal.

Could Riddell and other helmet companies have argued that the risks of brain injury in football should have been assumed by high school participants? Perhaps, but it would have been a double-edged sword. Such an admission would establish that brain injury in football is simply a part of the game, as opposed to the idea that such injuries are an unfortunate (but preventable) tragedy, as is asserted by outfits such as USA Football and the NFL.

Worse for the helmet companies, to concede that brain injuries are part and parcel of football would also be an admission that their product is incapable of protecting athletes from the commonplace concussion. Although Riddell did not make direct claims of concussion prevention until 2002, it’s safe to say the American public assumed the risk of brain injury in football was not akin to that in boxing, a perception almost entirely infuenced by football’s use of protective headgear, as Dr. Julian Bailes suggested in “League of Denial,” the bombshell 2013 book that played a vital role in exposing the NFL’s handling of traumatic brain injury concerns.

Just as the variety of player lawsuits against the NFL demonstrate the price of the league’s primacy in the sports industry, the current lawsuit against Riddell demonstrates the price of Riddell’s primacy in the helmet industry. By shrewdly taking a lion’s share of the market at the right time, Riddell was able to make a fortune by selling virtually the same product for 20 straight years. As for Riddell’s competitors, the cost of doing business eventually proved too high.

A competitive helmet market couldn’t handle the rising costs of insurance premiums and jury awards, as Kelly Carter reported in a 1988 article for the Pittsburgh Press headlined “Suits keep helmet makers on guard.” Carter reported that some 500 lawsuits had been brought against helmet makers from 1973 through 1988, and that approximately 95 percent of them had been settled out of court. One manufacturer, MacGregor, dropped out of the market shortly after they were hit with a $3.5 million lawsuit. Another, Rawlings, cited $7 million in insurance premiums between 1977 and 1988 as the impetus for their decision to exit the market.

Amidst this supposed crisis, though, two companies saw opportunity. America was far too obsessed with football, from the prep level to the professional level, for equipment demand to simply go away. So MacGregor re-entered the market by purchasing Riddell, and Schutt Sports purchased the other remaining brand, Athletic Helmet Inc., which remains far behind Riddell in terms of market share due to Riddell’s popularity at virtually every level of football.

The helmet industry was clearly far from dead, as the remaining two firms were able to pass their rising insurance and litigation costs onto schools and athletes. The price of a wholesale football helmet, according to the Press, rose from $42 in 1978 to $115 in 1985, a 273 percent increase in just seven years.

The football helmet industry was just fine, it turned out, but the fallout was terrible for consumers. Not only did prices jump, but the duopoly of Riddell and Schutt allowed for an environment with a near complete lack of competition, not just for market share but in research and development as well.

The current complaint against Riddell cites numerous advances made over two decades as Riddell was forced to compete with other helmet makers for market power, from the TK2 polycarbonate shell (1962) to the TAK-29 model (1963) to a “micro-fit model with injection molding” (1969) to an “air cushion helmet” (1973) to a “stainless steel facemark” (1977) to an Air Cushion Engineered model (1981) to the M155 model that became the industry standard in 1982.

And then, nothing until the Revolution model in 2002. The current complaint against Riddell alleges:

The Riddell Defendants are strictly liable for designing a defective and unreasonably dangerous product and for failing to warn which were proximate and producing causes of the personal injuries and other damages including, but not limited to, economic damage as alleged herein. A safer alternative design was economically and technologically feasible at the time the product left the control of the Riddell Defendants.

Instead, thanks to the monopoly power they won by staying in the market as other firms left, Riddell was happy to keep pushing out the same helmet, year after year, despite knowing full well it was incapable of preventing the kinds of brain injuries that were landing the company in court time and time again.

With their increased market share and ability to raise prices with impunity, however, Riddell had no incentive to change anything. Instead, it was easier to settle the cases out of court and just bite the bullet on legal fees and insurance premiums. It’s not as if they couldn’t handle the financial cost—the company raked in the profits while the pain and expenses fell on the young men who thought Riddell’s helmets were keeping them safe.