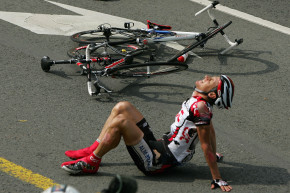 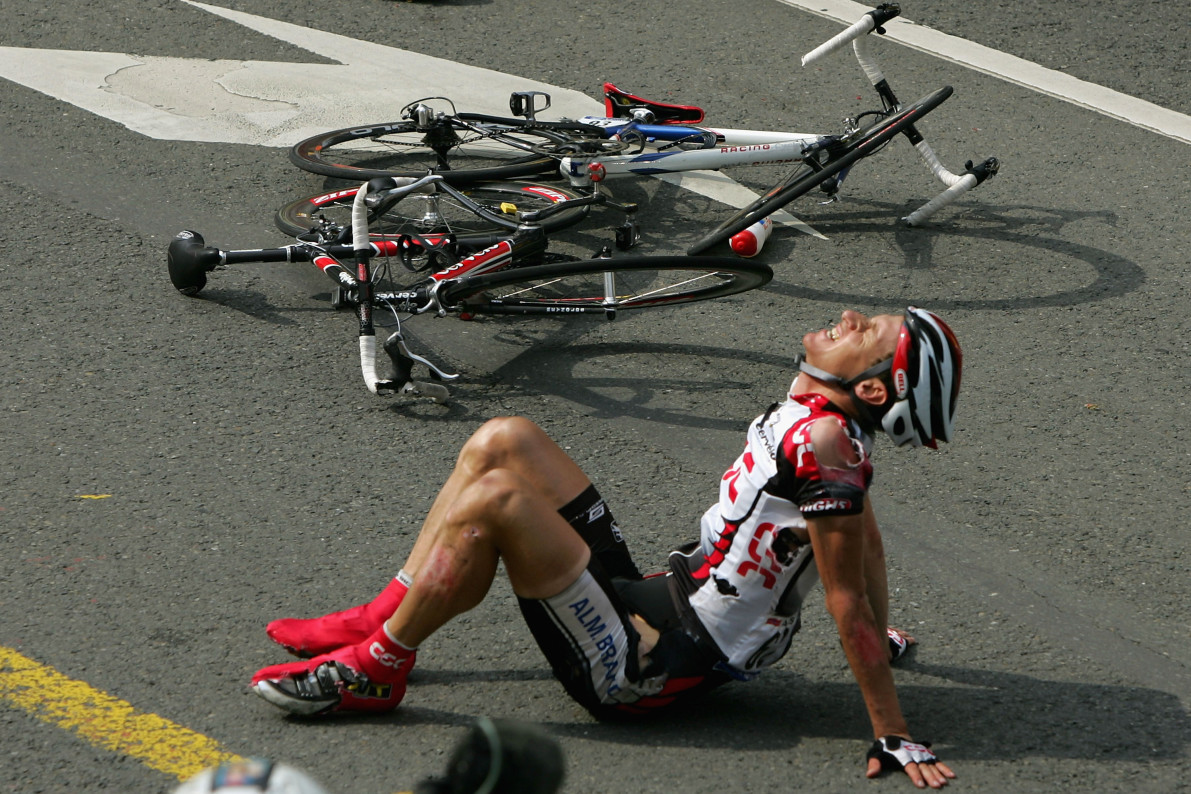 As spring arrived in Europe and the 2016 professional bike racing season clicked into gear, the sport endured one of the darkest moments in its long history.

The death of Antoine Demoitié, a 25-year-old Belgian professional, provoked widespread shock, sadness, and anger. The day after Demoitié’s accident in Gent-Wevelgem, a Belgian Spring classic, his 22-year-old compatriot Daan Myngheer died when he suffered a heart attack during a race in Corsica.

But it was Demoitié’s death that triggered intense debate. Demoitié had been involved in a crash, then run over by an official race motorbike—the injuries inflicted by the motorbike proved fatal. The police investigation is ongoing and the UCI (International Cycling Union) convened an emergency meeting.

Riders and cycling fans alike need answers: How was this allowed to happen? And what happens next?

If there was any kind of consensus in the court of social media, it seemed to be that Demoitié’s death had been coming. Some sought to blame the motorbike rider involved, race organizers, or the UCI. The general feeling was that serious incidents involving cars and motorbikes had been increasing, and Demoitié’s death was the inevitable conclusion of a worrying trend.

As if to underline the problem, two weeks after Demoitié’s death, Team Sky rider Elia Viviani was struck by a motorbike after a crash in Paris-Roubaix, sustaining a significant chest injury. The incident was captured on video by a fan at the roadside and promptly went viral. The calls for a solution intensified.

The issue with finding a solution is that professional bike racing is endlessly complex. Along with 200 bike riders—198 starters in the Tour de France, to be exact—dozens of race organization vehicles, team cars, camera motorbikes, a few VIP cars, countless fans at roadside, unpredictable weather, harrowing routes, temporary road closures, and the odd runaway dog contribute to every race’s complexity. Not to mention the inevitable stress that comes with highly motivated professional sportspeople fighting for glory on fast, ultra-light carbon bikes, with no protection aside from a helmet and a pair of gloves.

Bike racing is the very definition of organized chaos. But is it becoming more dangerous?

Cycling reporter and broadcaster Daniel Friebe, a veteran of 16 Tours de France, points to a recent fundamental change: “The peloton used to be more of a ‘hive mind’—a consensus—with a bit of community spirit,” Friebe said.

“You only have to look at film from a few years ago, but definitely 30 or 40 years ago, there’s film of riders rolling along eating plates of spaghetti,” he said.

“Now it’s more anarchy, more of a free-for-all: everyone against each other. The racing is more aggressive; it’s more of an intense fight for position. That makes it more dangerous.”

After the Demoitié tragedy, plenty of other theories emerged. There were too many race vehicles, too many motorbikes. In the search for excitement and entertainment, race organizers were to blame—sending the peloton and its entourage on increasingly dangerous and arguably unsuitable routes. Some argued the type of motorbikes used are the real problem, since they are heavy, wide machines that are impossible to stop quickly and safely. Others suggested a lack of training—or alternatively riders who are too old to do the job safely—could be the reason.

There is a paradox: while motorbikes may in one sense increase danger for the riders, the sport’s TV and media coverage would be infinitely poorer without them. TV audiences would fall, interest would wane, and thus the sport would not be as lucrative for the riders themselves. Secondly, it doesn’t necessarily follow that fewer motorbikes equals a safer race. In the case of outriders tasked with securing rolling road closures, they are a key safety feature of any race.

Movistar Team’s Alex Dowsett—current British Time Trial champion and Giro d’Italia stage winner—recognizes that some races are more dangerous than others. “If you took those Paris-Roubaix cobbles and put them in any other race, there’d be uproar [because of the inherent danger], “ Dowsett said. “But because it’s Roubaix, it’s part and parcel.”

“The Elia Viviani incident, it’s obviously terrible, but look at it in terms of physics: you’ve got two guys on something as heavy as a motorbike, trying to stop on cobbles,” Dowsett said. “It’s just not going to happen.”

That raises a question about race management: Should motorbikes be allowed near riders in certain areas? But danger would surely also lie in trying to divide any race into different sectors, with varying rules for race traffic.

The aftermath of a crash at the Giro d'Italia

Dowsett also attests to a fundamental change in rider behaviour. “We’re all racing harder,” he said. “Look at the Tour de France: every GC [General Classification] guy wants to be in the top 20 all the time, which requires all of his teammates to be in the top 20 with him. You’ve got 200 guys wanting to be in the top 20, on a piece of road that is only so wide. That’s the way cycling’s gone.

“The issue of motorbikes has always been there,” adds Dowsett. “It’s been more prevalent in the last two seasons, and we [the riders] are getting sick of it … You get angry when it’s avoidable.

“We’re racing bikes at high speed—it’s never going to be ‘safe’—but if it can be as safe as it feasibly can be, we’ll be happy, and I think spectators will be happy. No one wants to see a rider dying; no-one wants to see some of the things that happen that are completely avoidable and unnecessary. You do get on the start line wondering, in the back of your mind, how you’re going to be in five hours’ time.”

Speaking to Friebe on The Cycling Podcast, the sport’s greatest ever road sprinter Mark Cavendish echoes Dowsett: “It used to be that when a motorbike was coming past, you’d move over … the whole of cycling’s changed. You don’t let motorbikes through now. If you open that space, another rider is going to fill it. The riders have to take responsibility for that.”

In many of these accidents, the driver or motorbike rider is clearly at fault, but is social media blowing some of these incidents out of proportion?

“It’s the Facebook generation,” Dowsett says. “Everyone wants to put something on social media to prove they were there. Everything is documented, everything goes on the Internet.

“To actually see it, you feel it—it’s horrible. It makes you think ‘That’s not on.’ Everyone knows more now, don’t they? It’s down to social media.”

Friebe agrees that social media can fan the flames: “After the Demoitié accident, if you look at what people were tweeting, accusing people of having blood on their hands, of having killed someone, without knowing the circumstances—I think you have to be a bit careful.

“If everyone who works at the UCI had 50,000 followers on Twitter maybe they’d get the sympathy. If you tweet @UCICycling, you’re not going to get into an argument. The UCI aren’t going to come back at you. That’s just the nature of social media.”

Could Demoitié’s tragic death have been avoided? That is currently a question for the police, and for the UCI. Motorbikes and race vehicles are an integral part of professional cycling, and will remain so unless there are some profound changes.

It seems the most fundamental shift that has occurred in pro cycling in recent years—the factor that has most increased danger for riders—is the collective behavior of the riders themselves. That is not to say the sport cannot be made safer. It is not to argue that motorbike riders, car drivers, race organizers, and the UCI are blameless. But the cultural shift in the sport can’t be brushed aside either.

Clearly, any measure that can be taken to improve safety must be considered, but should also be balanced against what makes the sport a sport. One cyclist killed by a motorbike is one too many. But any accident at a bike race, no matter how trivial or how serious, should also be placed in the context of an increasingly aggressive style of racing.

The details of the terrible Demoitié accident are not yet known: the key will be for the sport to learn from what is uncovered. As Dowsett said, “As long as we learn from it, and avoid it if we can—that’s the important thing. If it comes to a tragedy for action to be taken it’s such a shame. But it will mean he won’t have died in vain.”