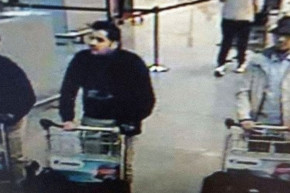 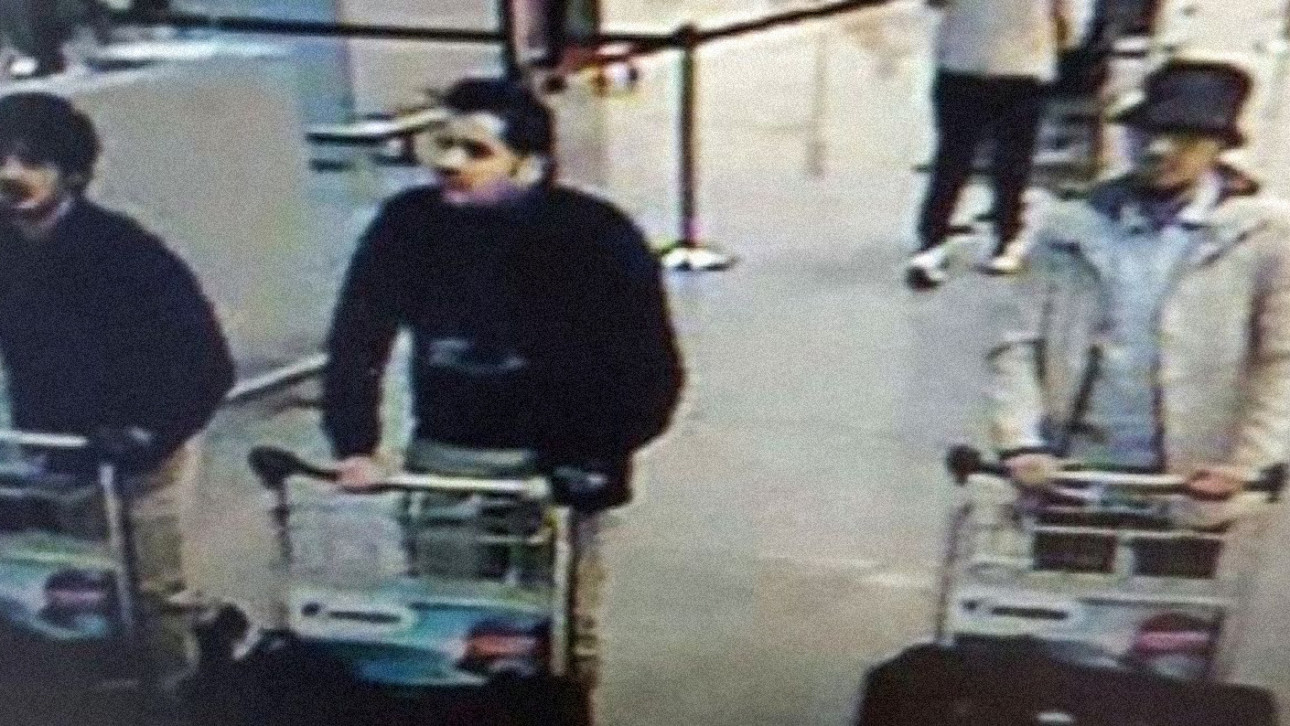 Belgian authorities are on a manhunt for one of three suspects seen in a CCTV image pushing baggage trolleys through the city’s airport before three deadly blasts ripped through Brussels Tuesday morning, killing at least 31 people and injuring more than a hundred others. The attacks, just days after Belgian authorities arrested the final suspect in November’s Paris terror attacks, prompted fears of retaliation and further attacks outside Belgium.

The suspect, seen in the photo above on the far right wearing a white jacket and a bucket hat, was being actively sought, federal prosecutor Frederic van Leeuw said, according to the Guardian. He added that the other two, wearing black gloves on their left hands thought to have concealed detonators, “very likely committed a suicide attack.”

ISIS officially claimed responsibility for the violence in a statement posted on Telegram, a messaging app popular among Islamic State supporters. The terror group said several “Caliphate soldiers” used explosive belts, IEDs and machine guns to attack locations in Brussels. The group also threatened “Crusader states” allied against ISIS with “dark days in response to their aggression against the Islamic State.”

“We were fearing terrorist attacks, and that has now happened,” Charles Michel, Belgium’s prime minister, said on Tuesday morning.

We will defend and protect our values and freedom. We are confronted with a barbaric enemy. But we are determined and united.

The explosions unfolded at Brussels’ largest airport and a central metro station, prompting authorities to divert flights and shut down the airport. The entire European city remains on lockdown, after Michel urged everyone to stay indoors. The airport will remain closed on Wednesday, officials have said.

Marc Decramer of UZ Gasthuisberg, a hospital near the airport that was attacked, told Flemish language broadcaster VTM that victims of the airport violence had nails in their bodies, indicating that nails were added to the detonated explosives to maximize casualties. Sweeps of the Schaerbeek area of Brussels on Tuesday night turned up chemicals, an ISIS flag and “an explosive device containing nails,” the prosecutors office said in a statement quoted by the Guardian. One and possibly two Kalashnikov rifles were found in the Brussels’ airport departure lounge after the attacks, a European security official told the Associated Press—the same type of weapon used by ISIS attackers in the Paris massacre last year.

An additional bomb was found at the Brussels airport and was safely destroyed, an official in Brussels told The Telegraph.

The explosions took place just several days after the arrest of Salah Abdelslam, a main suspect in a string of deadly attacks that struck Paris in November. Belgium’s federal prosecutor said one of the attacks was “probably” carried out by a suicide bomber. Najim Laachraoui and Mohamed Abrini, named as accomplices in the November Paris attacks, could be the focus of investigations, The Telegraph reported.

On November 13, 2015, a string of ISIS attacks left 130 dead in Paris—an act of coordinated violence that revealed the group’s ability to carry out sophisticated attacks outside its territory. Several of the attackers were traced back to the Brussels suburb of Molenbeek, which has been called Europe’s terror capital.

Speaking in Havana, Cuba on Tuesday, President Obama said the American people stand in solidarity with the people of Belgium. “The world must unite,” he said.” We must be together, regardless of nationality, or race or faith, in fighting against the scourge of terrorism.”

French President Francois Hollande said, “Terrorists struck Brussels, but it was Europe that was targeted, and it is all the world which is concerned by this.”

All flights in and out of Brussels have been cancelled through Wednesday, according to Flightradar24. Airports across the U.K., Germany and France—and elsewhere across the E.U.—have also boosted security.

After the unrest, the U.S. Embassy in Brussels issued a security message for U.S. citizens, recommending that they stay in place and avoid all public transportation.The embassy also reminded Americans that a security level 4 in Belgium is in effect, meaning the nation faces threat of a “serious and imminent attack.”