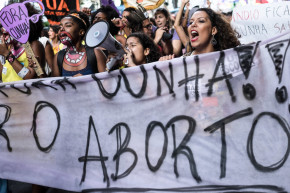 From Sketchy Pills To Upscale Clinics: Illegal Abortion In Brazil
By Tracy Clark-Flory

From Sketchy Pills To Upscale Clinics: Illegal Abortion In Brazil

Some access high-end services, others rely on illicit markets—and all are endangered by criminalization 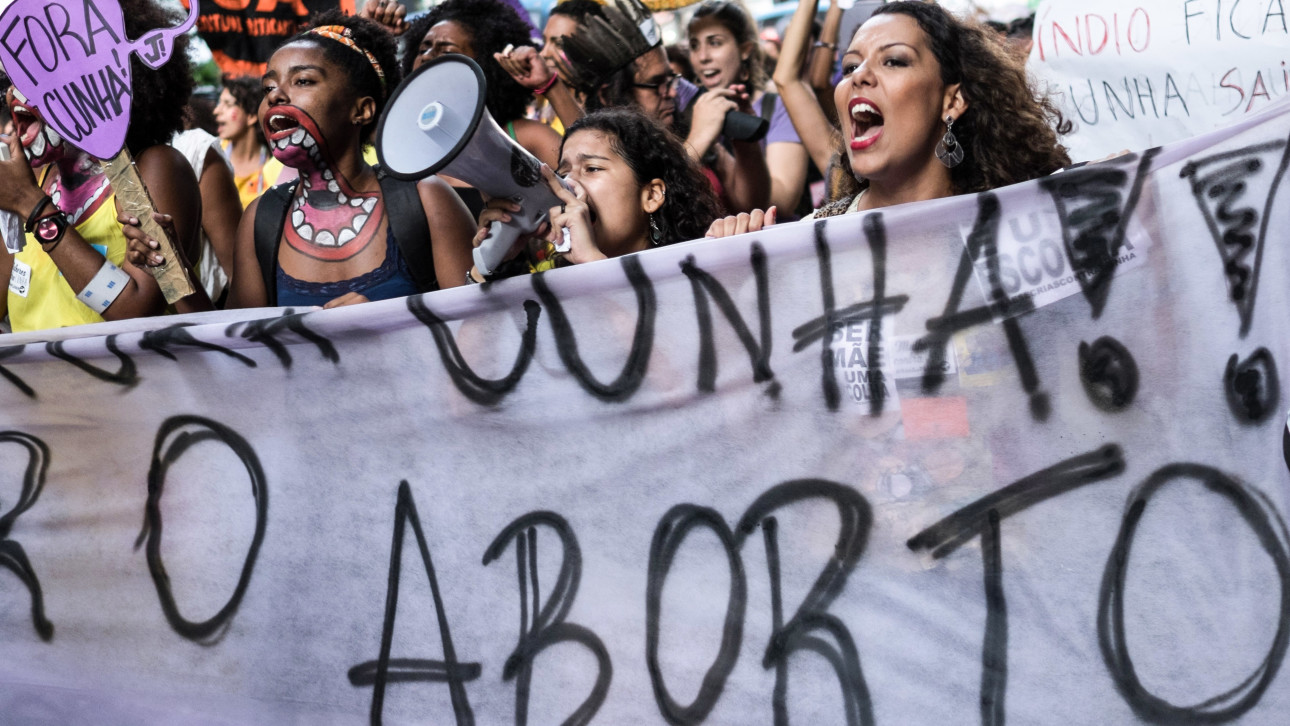 “Marina” got pregnant at the age of 20 when she was living in Sao Paulo, Brazil. Abortion is illegal in the country, except in rare circumstances, but she knew she had to terminate. “I was young and ambitious,” said the now-31-year-old, who describes herself as upper middle-class. “I had so many career and travel plans. I couldn’t just become a mother at that point.”

Despite the illegality, her gynecologist, a “very open and non-judgmental” doctor, referred her to an abortion clinic in an upscale neighborhood. When she arrived, the exterior door was reinforced and had “lots of [security] cameras,” she said. Inside, though, it was “very professional and up-to-code with all medical equipment and staff,” she told Vocativ. “Honestly, you would never say it was a ‘clandestine’ medical clinic by looking at it.”

Her story—and the story of abortion in Brazil—is one of stark contrasts. Wealthy Brazilian women sometimes fly to Mexico City or the U.S. for a legal procedure or, like Marina, access an illegal high-end clinic in the country. Poor women are often limited to buying abortion pills on the black market, visiting sketchy underground clinics or resorting to grisly at-home procedures. Plenty of women fall somewhere in-between those extremes—but all women, regardless of income, are impacted by the restrictions.

The situation has become even more dire as the country is rocked by the Zika outbreak, which has hit an estimated 1.5 million people in Brazil, and resulted in 5,131 suspected and known cases of the birth defect microcephaly, which is possibly associated with the virus.

In Brazil, it’s illegal to terminate a pregnancy, except in the case of rape, a threat to the mother’s life or anencephaly—a birth defect in which babies are born without parts of the brain or skull—and the procedure carries heavy criminal penalties for women and their doctors. In fact, lawmakers recently moved to increase punishment for women who abort from one to three years in prison to four-and-a-half years for women who abort fetuses because of microcephaly; and doctors in those cases could face 15 years behind bars. But, as is the case anywhere abortion is banned, it still happens—estimates range from 1 million to nearly 5 million abortions a year in Brazil.

“The nurses acted totally normal, like it wasn’t even illegal in Brazil at all,” Marina said. She told us she paid the equivalent of $4,500 and the procedure was over in an hour and a half. “They put me under with some kind of sedative,” she said. “I felt a distant cramping and then woke up.”

“The higher a woman’s educational and social status, the easier it is for her to undergo a safe abortion,” said Olimpio Moraes, a Brazilian doctor who has spoken out in favor of women’s access to abortion, told Vocativ in Portuguese. “For poorer women, it is harder.”

Moraes was excommunicated twice by the country’s Roman Catholic Church. The first time, it was for supporting the use of the morning-after pill. The second time, it was for performing an abortion on a 9-year-old rape victim. At the time, he thanked the archbishop for the excommunication, arguing that the surrounding controversy, which garnered international press, brought attention to the state of abortion in Brazil. (Since the girl’s life was at risk, the procedure Moraes performed was not illegal under Brazilian law.)

That said, money doesn’t guarantee safety. That was made devastatingly clear with the case of Jandira dos Santos Cruz, who paid the U.S. equivalent of $1,875 for an illegal abortion in Brazil in 2014 and whose body was found dismembered and charred in what police believe was an attempt to cover up a botched procedure. In another case that year, a woman named Elizangela Barbosa died after her uterus and intestines were perforated during an illegal abortion.

These are just the high-profile cases: Abortion is the fifth-highest cause of maternal mortality in Brazil. A stunning 200,000 women are hospitalized in the country each year for abortion complications, according to the Health Ministry. Research has shown a strong link between the criminalization of abortion and complications from abortion. For example, after South Africa legalized abortion in 1997, the rates of abortion-related deaths dropped by 91 percent. Infection rates dropped by 52 percent.

Short of being lucky enough to have a doctor willing to make a referral—not to mention the money to go through with a procedure—women in Brazil have to rely on word of mouth. “There is no way to find this information other than to know someone that had a friend [who received an illegal abortion],” said Bia Galli of Ipas, a global nongovernmental agency focused on access to safe abortion. “It is information sharing from one person to another person; it’s very informal.”

In the case of Sofia, a woman who shared her abortion story on the website Women on Web, a nonprofit that provides counseling and medication to women in need of abortions, it required quite a bit of legwork. “I remembered a cousin who had done a ‘suction’ procedure the year before at a clandestine clinic next to her house, in another state, here in Brazil,” she wrote in Portuguese. “We talked and she was very supportive and in a few hours I was purchasing an airline ticket so that I could be at that clinic the next morning.” She arrived only to find that the clinic had been shut down.

“I called a friend in another state for moral support,” she wrote. “Not only did she support me, but also [gave me] the contact information of a doctor who could possibly perform the fetal extraction procedure.” She then bought another plane ticket and flew to a clinic in a different state. “The clinic did not seem clandestine at all, the doctor took all the major healthcare plans,” she said, although she noted she was instructed to call a “secret cell phone” if she wanted to go through with the procedure.

Sofia’s account was scant on the details, but she says she paid the U.S. equivalent of $2,137 in cash and had an abortion at 11-weeks of pregnancy.

Often, women instead turn to abortion pills, which can be taken in the privacy of one’s home. A report published in the International Journal of Gynecology and Obstetrics in 2014 found that roughly 50 percent of Brazilians who had an abortion (or had a partner who had one) used some form of medication. The most common is misoprostol, which is sometimes used in conjunction with mifepristone, also known as RU-486, and is “sold in illegal clandestine markets,” as Galli, with the nonprofit Ipas, put it. The medication is sold right alongside illicit drugs like cocaine and ranges in price from $1 to $30 USD per pill, according to the report.

Sometimes, women go online instead. Since the Zika outbreak, Women on Web has seen a near threefold increase in interest from women in Brazil. “I am currently living in Brasil and I have contracted Zika. I am pregnant 5-6 weeks and wish to abort,” wrote one woman in an email to the organization provided to Vocativ. “I am unable to get mifepristone however I was able to purchase misoprostol on the black market. Can you please help advise me what is the best way to use misoprostol?” She continued, “There is a lot of information on the web with different dosages and I am concerned about negative side effects if not taken properly.”

No matter which avenue they choose for getting the pills, they run a high risk. If they go to the local drug markets, they might be arrested in a police sting. “It’s very dangerous, actually,” said Galli. If they order online, they might be charged with smuggling, as has happened in recent cases, according to Galli. Women on Web says Brazilian authorities have routinely seized shipments—since February, they say dozens of packages were confiscated and sent to ANVISA, the country’s regulatory agency. “Once they’re sent there they never come back,” said Leticia Zenevich, a spokesperson for Women on Web. ANVISA has not responded to Vocativ’s requests for comment.

Even if they manage to escape arrest while purchasing the pills, they are still at risk. Pills alleged to be misoprostol are often made of sugar or flour, according to a report by the research organization Gynuity. Authentic misoprostol is generally very safe and effective when accompanied by proper medical instruction.

It’s easy to find examples online of women who have taken what they believe to be misoprostol, but remain pregnant. Emily, then 23, wrote on Women on Web that she took several Misoprostol pills—she doesn’t say where she got them—and went through 10 hours of cramps, shaking, fever and “terrible pain that only got worse.” Afterward, she went to her doctor for an ultrasound and “to my great and terrible surprise the fetus was there, apparently intact with his heart beating and growing.”

She ordered yet more pills and writes, “The pain was so horrible, it made me vomit and I had to be carried to the hospital because I couldn’t even stand up.” Eventually, she was sent home and she ordered yet another shipment of pills, which caused her to pass what looked like large blood clots and landed her in the hospital. “I could barely breathe with pain,” she writes. But this time, she passed the gestational sac and an ultrasound showed that “debris” remained, which the doctor removed.

By some accounts, women are increasingly turning to so-called DIY abortions. Since the deaths in 2014 of dos Santos Cruz and Barbosa, there has been a crackdown on illegal clinics. Galli has gotten reports from a state clinic in a “very poor area” near Rio de Janeiro of a rise in cases of women with serious complications from unsafe abortions. “They are using very unsafe methods, things we didn’t see anymore,” she said. That includes use of acid-like chemicals that are injected into the vagina, according to Galli. Ana Derraik, clinical director of that clinic, has seen cases where women have died and even had to have their feet amputated after using such chemicals. “It is not rare that we see patients who have complications due to more invasive methods they use, such as introducing tongs or wands in their uterus,” she said.

Cases like these, of caustic chemicals being inserted into one’s body, seem hardly comparable to those of women like Marina, who are painlessly whisked in and out of pristine clinics. That’s why, after sharing her story, Marina said, “But that is very much not the reality in Brazil. I am just incredibly fortunate to be part of an elite that has always been able to pay for quality and basically pay for whatever they need regardless of law.”

The thing is, that is the reality in Brazil. All women in the country are greatly endangered by the criminalization of abortion, but as Galli put it, “We really have a social divide between those who can determine whether or not to be pregnant and the ones who don’t have this option at all.”

The identities of several women Vocativ spoke to were changed or last names were withheld to protect their privacy.