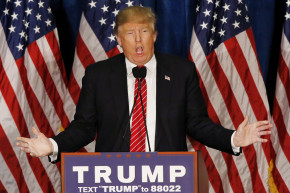 Reporter Files Charges Against Trump Staffer She Says Grabbed Her

Twitter users are in an uproar over the allegations made by Michelle Fields, and the Trump campaign's denial of the incident

Brietbart reporter Michelle Fields has filed a criminal complaint against Corey Lewandowski, the Trump campaign manager she says grabbed her hard enough to leave bruises after a press conference in Florida. Detective Adam Brown of the Jupiter, Florida police department confirmed to the Independent Journal that charges had been filed, and says they’ll release a statement soon. The story gets a little more complicated from there, although Fields has enough evidence that it shouldn’t.

Fields recounted the incident yesterday on Brietbart, a site that has been known for being particularly cozy with Trump. She said that after a televised press conference, she tried to ask Trump a question about affirmative action and “someone had grabbed me tightly by the arm and yanked me down.” She shared a photo on Twitter that distinctly show bruises on her arm. The Washington Post’s Ben Terris, who was standing next to her, corroborated the story. Politico has audio of the event.

Meanwhile, Lewandowski has taken to Twitter to call Fields an “attention seeker,” suggesting that she made the whole thing up. Worth noting that he links to GotNews, a widely discredited far right mess of a site run by Twitter pariah Chuck Johnson.

He later called her “delusional”:

@MichelleFields you are totally delusional. I never touched you. As a matter of fact, I have never even met you.

Naturally, the Trump campaign is standing by Lewandowski. When asked about the event last night, Trump told CNN “perhaps she made the story up. I think that’s what happened.” That’s the official party line for the Trump camp, too, who released a statement about the altercation this morning:

It really should be a more straightforward issue than this, but it’s the Trump campaign we’re talking about. What complicates the whole thing further is that Brietbart published a piece today suggesting that Terris “misidentified” Lewandowski. Meanwhile, Brietbart’s president and CEO Larry Solov released a statement of his own, saying that Brietbart is standing by Fields:

On Twitter, people are calling for Lewandowski’s resignation. The hashtags #StandWithMichelleFields and #FireCoreyLewandowski have been gaining traction since yesterday afternoon. Meanwhile, Trump rallies are growing increasingly violent. Yet in spite of evidence against the Trump campaign that Lewandowski manhandled Fields, what’s certain is that Trump’s people will fight the allegations tooth and nail before it ever admits any wrongdoing.