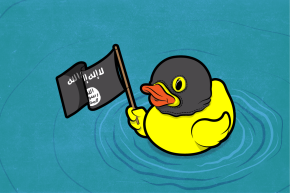 Anti-ISIS memes like ISISchan are taking on the terror organization with cute. 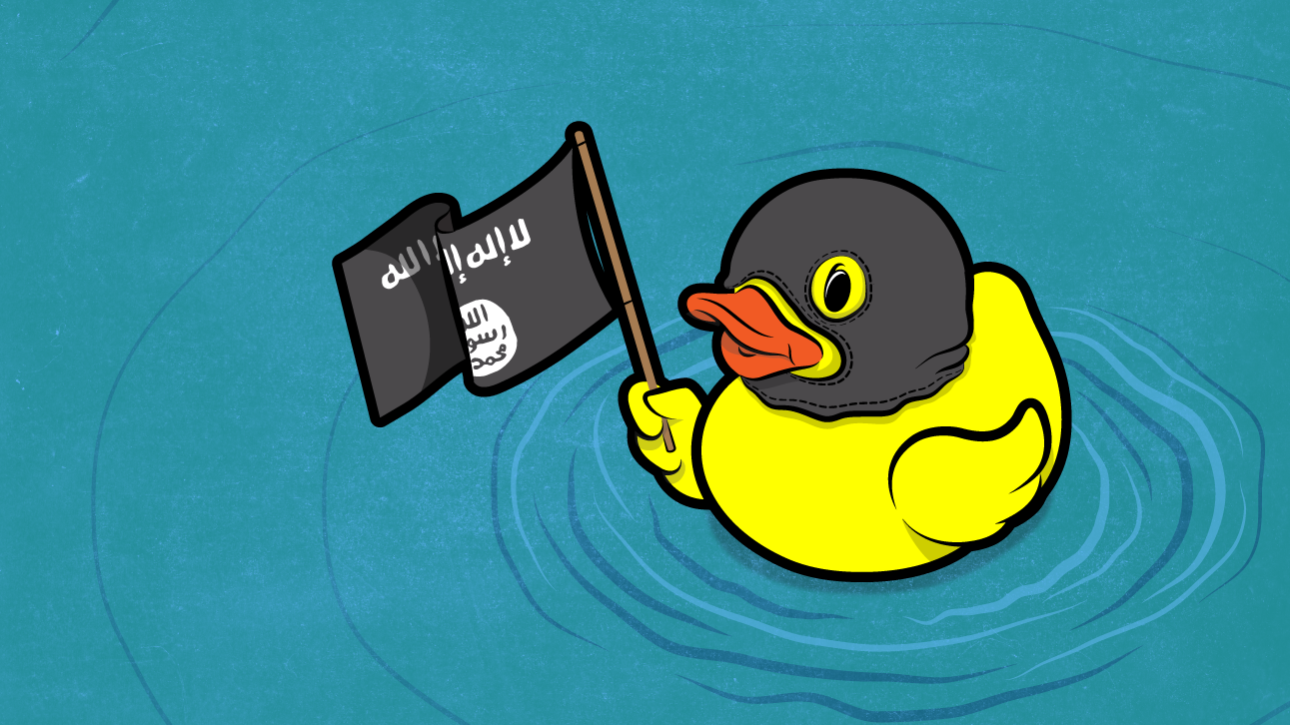 Twitter is ISIS’ most effective tool for reaching new recruits. By using popular hashtags linked to cultural phenomenons or popular events, ISIS can share their propaganda with millions of users across the world. And until recently, Twitter itself did very little to censor accounts linked to the terrorist group. If an ISIS message piques the interest of a disaffected teenager in Wisconsin, they’re just a tweet away from fraternizing with jihadis.

That’s why some online groups have contrived to clog up the hashtags used by ISIS with ridiculous anti-ISIS memes, most notably in the form of hyper-cute Japanese cartoons and rubber ducks photoshopped dressed as ISIS sympathizers.

The Duck State began, as many memes do, on the online forum 4chan. On November 23, 2015, someone posted on the Shit4chanSays (/s4s/) board: “How about castrating the image of Isis by replacing the faces on ALL the propaganda photos with bath ducks?”

A crew of photoshoppers got to work. There were jihadist rubber ducks chopping off heads, riding tanks and duck cars, carrying flags fusing Arabic and avian imagery, brushing their teeth with toilet brushes. Problematically, many of these memes also insulted the Islamic faith in general, by duck-ifying phrases that are sacred to Muslims.

The art juxtaposes imagery reminiscent of carefree childhood baths with horrific scenes of terrorist propaganda and imminent beheadings. And for many who saw the images, the effect was, well, really funny.

“ISIS, these are a bunch of guys who claim, ‘We’re a state, we’re Islamic, we have tanks, we decapitate people, we terrorize Western governments.’ And when you show them as a duck, you have this aesthetic of cuteness. It undercuts the militaristic, scary rhetoric and imagery,” Marwan Kraidy, professor at the Annenberg School for Communication at the University of Pennsylvania told Vocativ. Kraidy specializes in the intersection of Middle Eastern politics and digital insurgencies. “What’s interesting about the digital world is how easy you can subvert things you see. They just replace the face of militias with ducks and create another image. And that’s how parody works, classically. Instead of being frightening, it’s actually ridiculous. Instead of being martial and dignified, it’s actually grotesque and funny.” 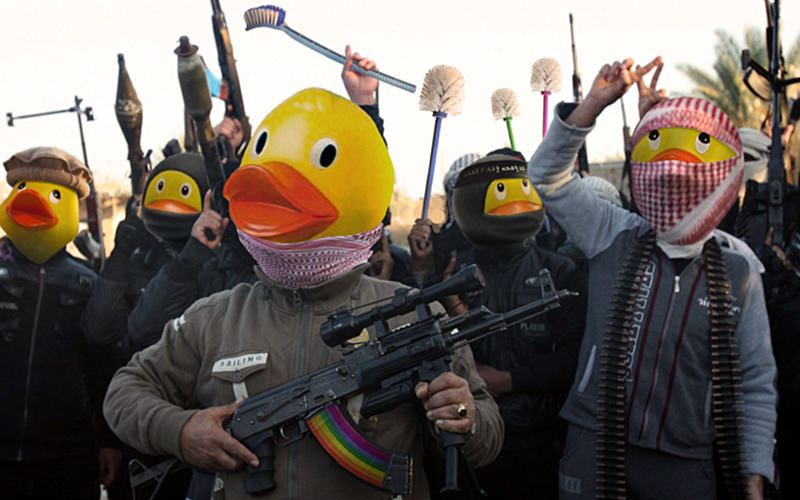 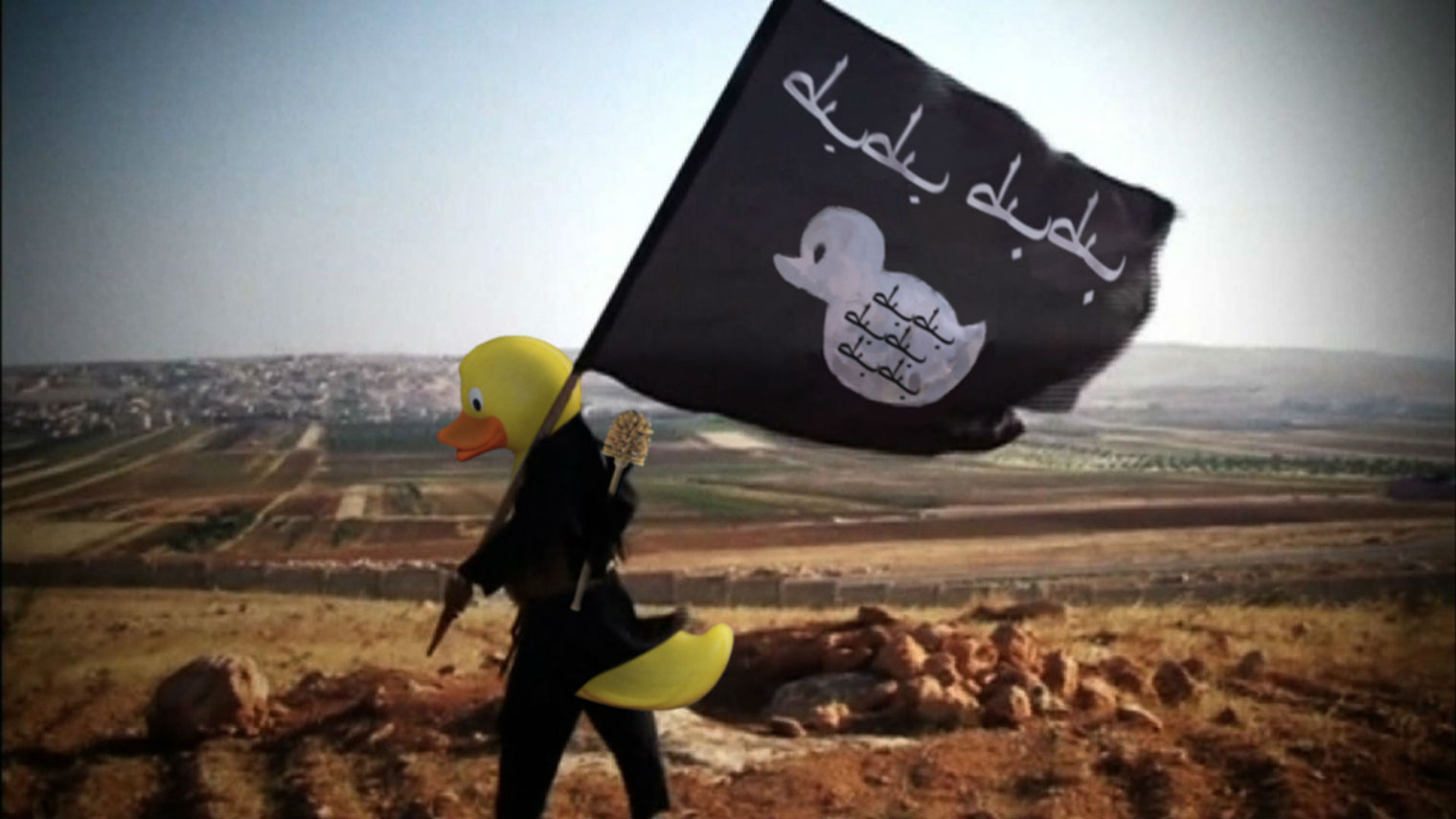 Anti-ISIS activists are increasingly using social media to fight terrorism. Trolling and social-media activism are explored in the seventh episode of DARK NET. The ground-breaking, new eight-part docuseries—developed and produced by Vocativ—airs Thursdays at 11 p.m. ET/PT on SHOWTIME.

This wasn’t the first time an online community had trolled ISIS, nor was it the most successful. The Duck State meme was good headline fodder, but it fizzled out within a couple weeks. Most of theses quacky terrorist images live on an imgur page, creates the duck state, which as been viewed 422,550 times, but Vocativ analysis of #DuckState, #DaeshDucks, #AllahuQuackbar and other hashtags associated with the meme suggest its popularity has withered.

On the other hand, ISISchan, another cutesy meme aimed at subverting ISIS propaganda, has only grown stronger since she was created just over a year ago. Born out of anger over the ISIS imprisonment (and eventual murder) of Japanese hostages Haruna Yukawa and Kenji Groto, ISISchan is an animated Japanese woman who loves melons and peace.

According to Know Your Meme, ISISchan began on 2 channel’s /news4vip/ board when someone started the thread: “Let’s make ISIS into a moe girl and send it to them!”

For those unfamiliar with anime, “Moe” is Japanese slag for the fetishization of young girls in anime and manga. The 2-channel user wanted to to create an animated young female character that disrupted ISIS propaganda. Three hours and 1,000 replies later, the thread had developed ISISchan’s profile, including her age (19), height (about 4’11”), eye color (green-ish), bust size (big) and favorite food (muskmelon).

“ISISchan is a combination of weird things,” Kraidy said. “On the one hand you have the typical anime facial features—huge eyes, oval-shaped face—with the black dress on top of it and the militaristic garb. So not only do you have a readymade [anima] community that will exchange this, but you have something that’s visually more arresting than the duck. It’s a character. It’s not just plastering rubber ducks over faces; you’re actually creating something new.”

The melon-loving busty teenager is more dynamic than the ducks of Duck State. She poses provocatively, eats melons and interacts with ISIS members, telling them that “knives are for cutting melons,” not for killing people. The only rules for ISISchan art is that it can’t include gore or porn, insult Islam, quote from the Quran, or feature Muhammad, Allah or other religious iconography. This is partially because they don’t want to attack any religion, only terrorism, but also because they don’t want to turn off anyone from drawing ISISchan, even children. The creators wanted to create so many ISISchan images that they could fill “ISIS” Google search with the cute melon-loving teenager in an ISIS uniform. They estimate more than 5,000 ISISchan images have been created (it’s impossible to determine the exact amount), but admit that they have not succeeded at eclipsing ISIS’s search engine optimization.

“ISISchan has been tremendously successful. If you look at the initial goal—to change Google results when people look for ISIS—then no. That’s really tough.” Gen Knoxx, an American anti-ISIS activist involved the Japan-based ISISchan movement, told Vocativ (she requested to stay anonymous). “But as far as being empowering to those who create and share her, absolutely. There are two easy ways for regular people to do something about ISIS online. They can report ISIS content on the sites they visit. And the can share ISISchan. It’s empowering.”

Since the beginning of the year, ISISchan memes have been posted on Twitter hundreds of thousands of times. In that same amount of time there have only been a few hundred Duck State postings.

“The duck thing is just making fun of ISIS—making them look silly. ISISchan is a counter-narrative. The message is that what ISIS is doing isn’t normal or right,” Gen Knoxx, said. “Plus she’s so kind. She travels to the places they are and gently explains that they really should just be cutting melons (and other food) with their knives.”

While Duck State shows ISIS ducks with toilet brushes in their mouths, and seems to mock ISIS, ISISchan is more compassionate, according to Genn Knoxx. “It’s clear from the photoshopped images that she is loved and admired. That she and her message are respected. And that she’s not making fun of the ISIS fighters, supporters and regular people. She’s trying to help them,” Genn Knoxx said.

Gen Knoxx said she is the only American involved with ISISchan, the rest are Japanese, and speak collectively from the Twitter account @isisvipper. That account told Vocativ, over direct message, that they choose to fight ISIS with cuteness instead of anger. “In the fight against long gloomy dark chaos,” it’s “necessary to [laugh] and ease tense feelings,” @isisvipper said. They claim they try to “mystify/baffle like ninja … because we’re descendants of ninja★ミ.”

Kraidy agrees that their ninja methods are more effective than other anti-ISIS memes, like Duck State, but believes any art that blends ISIS propaganda with absurd imagery is one of the most effective ways to combat ISIS online. “ISIS doesn’t have a message that you can rebut in the classical propaganda sense. Their whole message is themselves: ‘We’re horrible. We’re frightening.'” Kraidy said. “And so this is really the only way to rebut what they do. This is not trying to convince people of a rational argument against them. This is just making fun of them and, through that, showing people they’re actually monsters.”

Sometimes it takes a very cute army to fight the monsters.