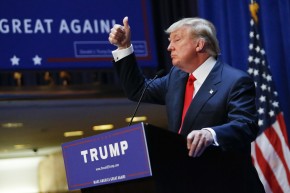 Donald Trump comes in at the bottom of the pack, with language around a third-grade level

Anyone watching TV Tuesday night saw hours of back-to-back speeches from the New Hampshire winners and losers. But amid the endless stumping, one speech stood out. Shown alongside his competitors, the particular (and particularly effective) language and style of Donald Trump is remarkably clear.

To see if there’s any quantifiable difference between Trump and everyone else, we gauged the post-primary speeches of all four candidates by the reading-level. Trump comes in lowest, speaking at a fourth-grade level. By comparison, the New Hampshire speeches of Hillary Clinton and GOP primary runner-up John Kasich were ranked at eighth and sixth grade, respectively. Bernie Sanders, with his speech’s readability at a tenth grade level, had the highest grade out of the four candidates.

We used the Flesch-Kincaid readability test to determine the grade levels. The test measures sentence count, words per sentence, characters per word, and syllables per word. A speech with longer sentences and complex vocabulary is given a higher score and vice versa, indicating what level of education is needed to understand that speech.

While it’d be easy to disparage Trump for his low register, his campaign is appealing to a surprisingly wide group of people. His win in New Hampshire cut across most demographic groups, with particular support among people without college degrees. Trump’s style is fitting for a campaign prides itself on its appeal to everyday Americans—an explicit reject of the so-called elites of the establishment.