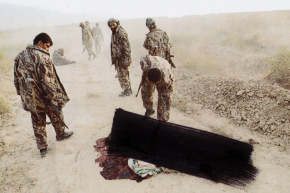 DARK NET: When Looking At Graphic Images Is Part Of The Job
By Ian Frisch

DARK NET: When Looking At Graphic Images Is Part Of The Job

As user-generated content becomes a mainstay of journalism, so too does vicarious trauma 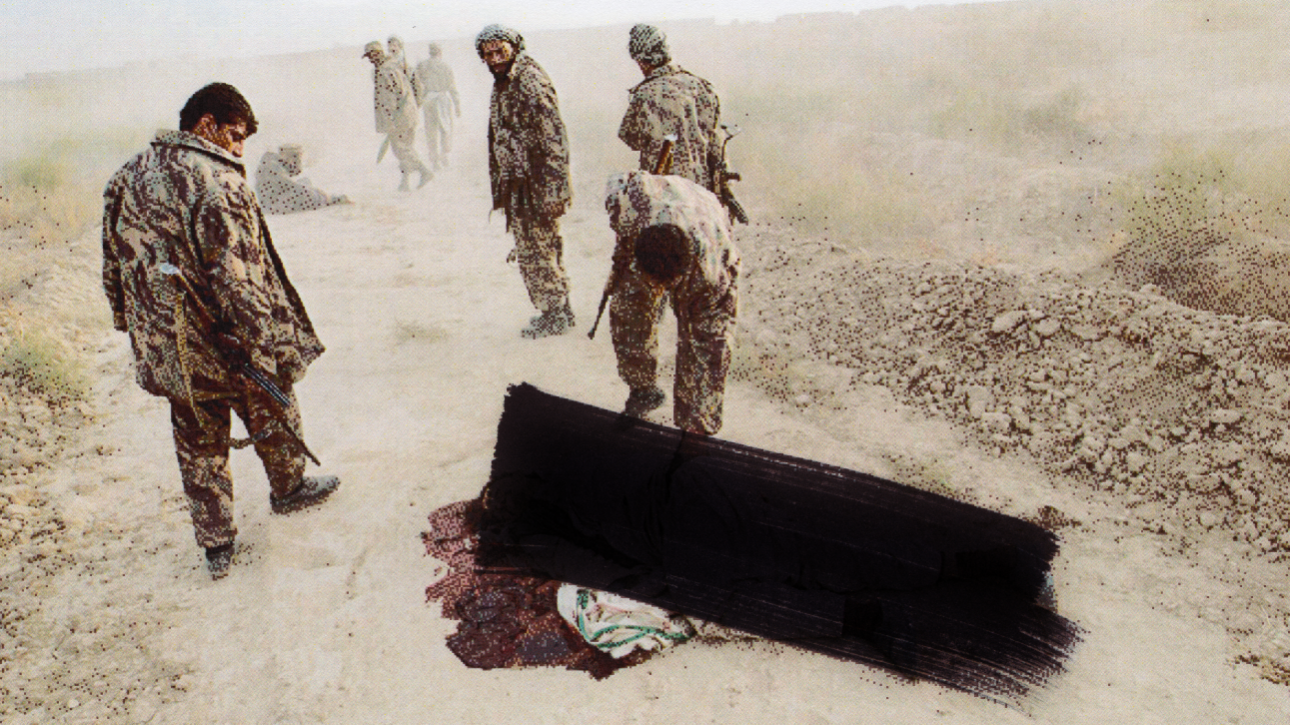 Once the job of a handful of war correspondents, photographing the graphic reality of the world’s bloodiest conflict zones is now possible for anyone with a camera phone—and disseminating these images via social media is easier than ever. Finding this user-generated content has quickly become a crucial aspect to news gathering, and the task of combing through this distressing footage for hours each day falls to scores of journalists far outside the front lines.

As quickly as user-generated content has proven to benefit the media industry, it’s begun to bring new challenges, namely the proliferation of journalists who experience vicarious trauma as a result of their work.

“It is very likely that extensive viewing of such materials will have some sort of emotional impact,” says Dr. Scott Orr, associate professor of psychiatry at Harvard Medical School and associate director of the Post Traumatic Stress Disorder and Psychophysiology Lab at Massachusetts General Hospital.

The inherent control the internet has over people is explored in the fourth episode of DARK NET. The thought-provoking, new eight-part docuseries—developed and produced by Vocativ—airs Thursdays at 11 p.m. ET/PT on SHOWTIME.

In 2011, Asha Phillips was hired as the Asia Bureau Chief for Storyful, an upstart technology company specializing in the discovery, verification and dissemination of user-generated content from around the world. Storyful finds authentic news footage—sourced largely from civilians on the ground through social media platforms like Twitter—and then sells it to major news outlets like The New York Times and ABC News.

“I always think about the chemical weapons videos.” — Asha Phillips

Phillips, working alone out of her home just outside Ho Chi Minh City, was in charge of gathering and verifying multimedia content, mainly from Syria and other parts of the Middle East, which was in the midst of the region-wide revolution Arab Spring.

It was a strange juxtaposition for Phillips. She lived, more or less, in paradise. She had a boyfriend who worked a steady, full-time job at a local shipyard. They had a dog, a German Shepherd who would lounge with her while she worked. The weather was tropical, the city bustling. But for eight hours a day, she sat alone in her home watching violent videos that emerged from pockets of unrest across the Middle East. “I always think about the chemical weapons videos,” Phillips says, “or weapons attacks—images of dead children.”

In one instance, she had to verify the location of a video depicting dead bodies being thrown from the bed of a truck and into a river. She had to replay the video countless times. “Those types of situations make it worse,” she says. “It’s usually dozens of times you are watching things over and over.”

But what she remembers most are the people in the videos screaming in pain after being pierced by gunfire and the shock of seeing the aftermath of bombings.

“When the day ended, I was still thinking about what I saw,” Phillips says. “I knew I would be looking at some interesting material [when I accepted the job], but I didn’t think I would be looking at this graphic of content. About a year-and-a-half into it, I couldn’t look at Syria content anymore. I just stopped. I took myself off that beat.”

Phillips also says that her superiors at Storyful were supportive of her decision. “Mark Little”—the owner of Storyful at the time—”was understanding about it and put verbal policies into place,” she says. “At one point, Mark hired a counselor to be available, with group sessions once in awhile to talk about coping mechanisms.”

Things have changed at Storyful since Phillips took herself off the beat. When asked for comment, the company said, “Journalists at Storyful see and engage with a range of content, some of which can be very troubling. Because of this, our policy and approach has evolved since the early days of 2012. We provide free, private support through a partner for any journalist (or employee) that would like to talk with a professional.” They add that have they have conducted a training for all employees on how to identify vicarious trauma.

Although viewing graphic content is not a new phenomenon in newsrooms—photo editors have been evaluating sensitive imagery for decades—the landscape of where this content comes from and how it is processed is changing dramatically.

“In the same day you see the aftermath of a car bomb in Mexico, an earthquake in Nepal and a rape in Nigeria.” — Sam Dubberley

“This is what is strikingly different now in the last couple years: the volume of distressing images that is just pouring through the social media pipeline into news organizations, the necessity of that being carefully curated by the news organization, the number of hands that touch it, eyeballs look at it—that’s really the new thing,” says Bruce Shapiro, executive director of the Dart Center for Journalism and Trauma. “They need to verify, curate and edit all of those things. That means that you’ve got both a larger volume of content—a lot of it with sound, which can add a different horrific dimension to it—and more people are affected by it too.”

According to a report released in December 2015 by Eyewitness Media Hub, 52 percent of journalists engage with disturbing eyewitness media at least several times per week, and 22 percent are in contact with traumatic user-generated content for over six hours per day. “We are very quick to grab a new technology, new social media, new toy [and ask] how can we get more content? We do not think about potential distressing effects it can have,” says Sam Dubberley, co-founder of Eyewitness Media Hub, who also worked on the research study. “[The hazards of] looking at user-generated content for work needs to be taken as seriously as we take the mental health and the occupational health of correspondents and field producers who are in conflict zones.”

Previously, the most mentally damaging situations for journalists were reserved for those working in the field. But now, office-bound journalists are able to experience an entire world’s pain simultaneously—and nearly in real time. They can be in a dozen places at once. The geographic component of journalistic trauma has been removed. The frontline, now, is largely digital. “In the same day you see the aftermath of a car bomb in Mexico, an earthquake in Nepal and a rape in Nigeria,” explains Dubberley.

There are neurological consequences, too. “People who do this work, it can affect their brain structure,” says Dr. Elana Newman, professor of psychology at The University of Tulsa, who specializes in the occupational health of journalists and consulted Eyewitness Media Hub on the report. She adds that viewing this type of imagery can change aspects of the prefrontal cortex, the part of the brain that helps processes imagery. Newman explains that people use context to make sense of horrible things, but since much of user-generated content is fragmented, it presents additional psychological challenges not seen in on-the-ground personnel. While a journalist’s brain may attempt to make sense of fragmented, graphic imagery found on Twitter, the journalist is unable to contextualize the carnage into a greater narrative.

Dubberley’s research revealed that 37 percent of journalists perceived “very high personal adverse effects” from traumatic user-generated content, and several subjects even underwent treatment for Post Traumatic Stress Disorder (PTSD). One reporter* told Dubberley, “I saw a PTSD specialist. It’s really expensive. She wants to see me weekly because she’s slightly concerned about me. It is the work, but then it is also how it affects your life. We’re human beings and … confronting death on a regular basis is too much sometimes.”

“If there is a horrifying event, someone is there with a mobile phone.” — Bruce Shapiro

Some reporters interviewed in the report also described succumbing to negative coping mechanisms such as excessive alcohol consumption, social isolation, binge-eating and promiscuous sex. One senior-level news editor relayed a drinking-related scale used to evaluate user-generated content—”three-pint and five-pint videos”—that became part of the lexicon at their news organization. Some editors admitted that they did not have any coping mechanisms whatsoever: “I soldier on and bury myself into even more work,” one editor told Eyewitness Media Hub. “I use work to get over work. I know it is not healthy!”

The opportunity to correct this problem, however, lies not with the editor on the digital frontline, but the news organization overseeing the operation. And while many outlets recognize the increased presence of trauma experienced by editors reviewing this content—Bruce Shapiro at the Dart Center says he has received many calls on the subject in recent years—not many have policies or procedures in place to prevent it. According to Dubberley’s report, only 24 percent of newsmen and newswomen had access to relevant training at their place of work, and only 38 percent had access to formal counseling.

The problem of adequate preparation trickles down to before journalists even enter the workforce. Not one journalist interviewed for Dubberley’s report had access to vicarious trauma training in any undergraduate or graduate degree program. “I did a Master’s degree in journalism; there was very little, if any at all, training around social media, let alone verifying sourcing and looking at this kind of content,” one social media editor, who graduated in 2011, told Eyewitness Media Hub. The figure-it-out-as-you-go approach is par for the course concerning this situation, regardless of sector. “We didn’t have safety training until problems starting coming up,” says Newman. “Organizations are waiting until problems arise before creating solutions.

As the emphasis on user-generated content in news stories continues to grow, the proliferation of vicarious trauma will persist in newsrooms, affecting thousands of journalists across the globe. While technology has pushed journalism into a new sphere of capability, this evolving system of content creation requires a thoughtful approach to support those living within it. “If there is a horrifying event, someone is there with a mobile phone,” Shapiro says. “This is here to stay.”

*News professionals who participated in the Eyewitness Media Hub study did so anonymously.