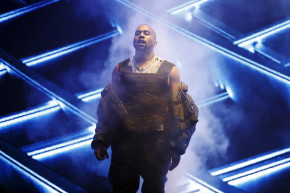 If you weren’t lucky enough to be at your computer on Wednesday afternoon, Kanye West froze the internet with his ruthless Twitter destruction of rapper Wiz Khalifa.

After Khalifa shared a vague opinion on the name of Kanye’s new album and a seemingly innocuous mention of smoking “KK,” his tweets were met with a 31-tweet-rant by Kanye because Kanye perceived it as a slight towards his wife, Kim Kardashian. Unbeknownst to Kanye, it was actually a reference to “Khalifa Kush,” Wiz’s own weed strain. It’s also worth noting that Wiz has a child with Kanye’s ex-girlfriend, Amber Rose. Clearly, there were some buried emotions at play here.

Unfortunately, Kanye is notorious for tweeting and deleting, which is exactly what happened to the vast majority of these tweets. So you’ll have to do with these screenshots, posted in reverse chronological order:

So…the aftermath! As is prone to happen when Kanye starts talking, “Kanye” and “Ye and Wiz” started trending nationally on Twitter, while “Kanye” is also trending worldwide.

Surprisingly, #wizwearscoolpants hasn’t started trending yet, but there are a bunch of people on Twitter saying that’s what Kanye should rename his album. Judging by his track record with album names, we wouldn’t be surprised if he did.