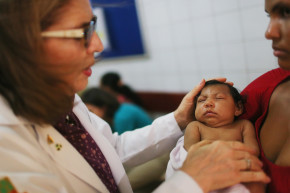 The Worrying Spread Of The Zika Virus
By Sarah Kaufman

The Worrying Spread Of The Zika Virus

At least 3,893 cases of a severe birth defect potentially linked to the mosquito-transmitted virus have been found in Brazil since May 2015.

A mosquito species capable of carrying the Zika virus has been found in Washington D.C., according to a study released Tuesday. The virus is suspected to be behind an uptick in cases of microcephaly, a birth defect that causes small head size and developmental delays. In Brazil alone there have been 3,800 instances of birth defects in the past year possibly attributable to the virus.

Researchers from the University of Notre Dame uncovered a population of the Aedes aegypti mosquito species near Capitol Hill, raising concern about the possibility of Zika spreading throughout the United States. The mosquito is typically found in tropical and subtropical climates in the Southern United States and Latin America, but its appearance in the Mid-Atlantic could indicate the species is becoming better adapted to relatively colder climates.

The Zika virus has spread rapidly in South America over the past year. The Aedes species capable of carrying the disease are currently present in every country in the Western hemisphere, except Canada and Chile, according to the World Health Organization. While the virus is usually responsible for mild fever-like symptoms, it is thought to be at the heart of a recent outbreak of a more serious birth defects.

The virus has spread to 22 countries and territories in the Americas in less than a year since the first case was confirmed in Brazil in May 2015, according to the Centers for Disease Control and Prevention.

In the United States, people in Florida, Illinois, New Jersey, Texas and Hawaii have tested positive for the virus, but they had all recently traveled to countries in which researchers found Zika in mosquitos, The Washington Post reported. Travel alerts have been issued for all 22 countries with the virus by the CDC.

There are no vaccines or medications to prevent or treat Zika, reports the CDC. Only one out of five people who contract the virus show symptoms, and the symptoms are usually mild enough not to require hospitalization. But with the surge in cases of microcephaly, health officials are advising pregnant women to avoid countries in which the Zika virus has been detected.

Not enough is known about the connection between Zika and microcephaly, according to the CDC. But researchers have found the Zika virus was present in two pregnancies that ended in miscarriage and in two infants who suffered from microcephaly and died not long after they were born. Brazil has recorded 3,893 cases of microcephaly since May 2015, according to the Brazilian Health Ministry. There were fewer than 150 cases of the defect in 2014, The Washington Post reported.

Officials in Colombia, Ecuador, El Salvador and Jamaica have urged women to not become pregnant until they know more about the relationship between the Zika virus and birth defects. But the delaying of pregnancy might prove hard (and counterintuitive) in countries where birth control and abortion are difficult (or impossible) to access.