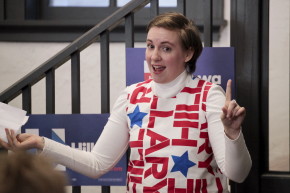 Well, it depends how you define 'help'

The 2016 presidential reality show is nearing the first big knockout rounds in Iowa and New Hampshire, and so the Democratic and Republican frontrunners—Hillary Clinton and Donald Trump, respectively—are looking to consolidate support with the help of some celebrity firepower.

Clinton went out and procured forever-GIRL Lena Dunham to don some highbrow HilGarb and stump for her in those states. Meanwhile, on Tuesday, Donald Trump convinced fellow reality TV alum and former vice presidential candidate Sarah Palin to endorse him in a speech marked by the bellicose incoherence that many Americans believe will repave our road to greatness. Maybe make it one way this time.

In both cases, the organizational bureaus of mighty human brands settled upon arrangements agreeable to all. The presidential candidates hope to siphon the prestige of their endorsers, and gain the support of their audiences in key demographics (GIRLS, moose mommies, etc.) The endorsing celebrities get to support values and a message they—hopefully—believe in, while at the same time soaking up the light of public attention, which can often be converted into legal tender, or rolled over in exchange for even more attention.

But do celebrity political endorsements even work? And if so, how?

“It’s very difficult to isolate the impact of celebrities say on turn out or vote choice,” says Mike Cobb, a political science professor at North Carolina State University who has studied the issue. In the context of a voter survey it’s a challenge to separate out the influence of a single celebrity versus any number of other factors. Cobb himself turned to experimental studies, where subjects are assigned what-if scenarios involving celebrities and various political endorsements. Cobb says These studies “don’t really suggest celebrities are effective at getting people to want to vote.”

It’s no surprise that a celebrity endorsement is unlikely to change someone’s general election presidential vote in in an era of profound political polarization. It would be frightening if one could. But this does not mean endorsements are useless.

“If I’m a Republican and I’m voting amongst eight Republicans, my party affiliation doesn’t help me pick which one anymore, so how am I gonna choose?” asks Cobb. “A celebrity endorsing one of the candidates if that celebrity is very credible and popular might be effective.”

That’s exactly where Oprah was effective for Obama in 2008. Oprah is perhaps a special case though, since she is not so much a celebrity as a demigod with a robust media arm, who had already primed Her followers to submit to the dictates of her consumer preferences.

Cobb’s research suggests most celebrities don’t fare so well. “If you’re a celebrity and you’re [endorsing], you’re risking your brand.” He found those turned off by a hypothetical endorsement by Angelina Jolie even found her to be less attractive afterwards. Perhaps this helps explains some of the great torrent of social media bile that has flowed towards Palin and Dunham in the wake of their respective endorsements.

Nothing is doing more to erode my support for Hilary Clinton than Lena Dunham  https://t.co/41qXanB2NV

Though it’s perfect that Lena Dunham has teamed up with Hilary. “I get the appeal, but it annoys me” sums up my feelings on Girls AND Hilary

Brilliant strategy by Trump. Anybody looks more competent next to Sarah Palin.

I have stared into the void of our universe and it looks like Sarah Palin endorsing Donald Trump. Lord have mercy. https://t.co/pgp8ZQAFAF

If endorsements are unlikely to decide any one person’s vote, they may still be useful if applied strategically.

“It’s effective if the celebrity already has an established position on the issue you’re talking about,” says Joshua Goodman a Vice President at the PR and consulting firm SKD Knickerbocker, who previously worked in politics. That could be RFK on the environment, or former NY firefighter Steve Buscemi on issues in the city. “If you’re not a political person and you maybe follow politics a little bit…this celebrity validator says ‘You already know that I’m a person who is publicly devoted to this issue, well so is this candidate.’”

Mechanically, Goodman says a celebrity’s involvement in a campaign usually follows the request of a presidential candidate. Then depending on their willingness and abilities a campaign might deploy them as anything from a name on a press release to a featured guest or speaker at a fundraiser.

In this election cycle you can see the blessed trilogy of candidate need coinciding with celebrity interest and ability in rapper and activist Killer Mike’s endorsement of Bernie Sanders. Killer Mike went from getting stoned and reading Sanders’ tweets to working the candidate’s post-debate spin room, not only because he is a powerful speaker, but also because he plugs a leak in the Good Ship Bernie– the candidate’s lack of black support. It also benefits from not being detracted from by seemingly contrary-to-endorsement statements or actions.

Ironically, celebrities looking to get the most out of their endorsement might learn from current nominee Donald Trump’s 2012 endorsement of Mitt Romney. In this truly boss move, The Washington Post reported Trump wanted to make his endorsement “more than Romney wants it.” But if a celebrity isn’t willing to commit to a jerkish power play, they might want to back off. “Unless you don’t care, you shouldn’t be doing this very publicly” says Cobb. “The more underneath the radar the better.”