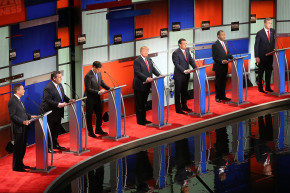 Despite GOP Candidates’ Claims, The U.S. Military Isn’t Being Gutted
By Kate Brannen

Despite GOP Candidates’ Claims, The U.S. Military Isn’t Being Gutted

During the GOP debate Thursday night, candidates insisted President Obama has weakened the military through budget cuts, but the reality is far different

Thursday night’s Republican presidential debate was rife with disagreement and personal attacks, but there was one issue that the candidates seemed to agree on: the Obama administration has “gutted” the U.S. military.

“Our military is a disaster,” Donald Trump said.

Gov. Chris Christie of New Jersey went so far as to imply that the 10 American sailors detained by Iran were captured because the Obama administration has allowed the U.S. Navy to become so degraded.

“Tin pot dictators … are taking our Navy ships,” he said.

Defense Secretary Ashton Carter said Thursday that a navigational error by the sailors inadvertently brought them into Iranian sovereign waters. The sailors were still being debriefed on Thursday to find out what else might have gone wrong.

More As US Military Bases Ramp Up Security, ISIS Obsess Over 5-Star Hotel

But for Christie and the other Republican candidates, the incident with Iran was an example of how the Obama administration has weakened the U.S. military through budget cuts.

The Pentagon’s budget has faced pressure as Congress has tried to trim federal discretionary spending, of which defense spending takes up the largest share, but by no measure has it been “gutted,” according to historical data.

“The defense budget today is about the same level it was (adjusting for inflation) at the peak of the Reagan administration,” said Todd Harrison, the director of defense budget analysis at the Center for Strategic and International Studies.

The defense cuts that have been signed into law by President Barack Obama were agreed to as part of bipartisan congressional budget deals. To meet these new spending guidelines crafted by Congress, the Pentagon has had to take a hard look at personnel benefits, shuttering U.S. bases and retiring older weapon systems to focus on newer capabilities.

At the same time, every defense secretary appointed by Obama, with the exception of Robert Gates who left office beforehand, has asked Congress for relief from sequestration—a budget mechanism written into law in 2011 to force Congress to identify budget cuts by threatening deeper, indiscriminate slashing if they didn’t—which would level steep automatic cuts across the military’s budget.

Still, with few specifics offered, the Republican presidential candidates repeated the claim that the U.S. military needs to be rebuilt after years of neglect.

Bush, especially, returned to the theme of a weakened military a handful of times throughout the night. His claim that every weapon system has been “gutted” under Obama is easily refuted with a quick glance at the Pentagon’s budget for 2015.

Certain weapon systems experienced defense cuts this year, while others saw their funding boosted, typical for any White House as it makes choices about which capabilities to prioritize. In 2015, the White House increased spending on special operations forces, armed surveillance drones, the F-35 Joint Strike Fighter, aerial refueling tankers and certain Navy ships, among other items.

Bush pointed to the size of the Navy’s fleet and the age of the Air Force’s planes to drive his point home.

As he’s campaigned around the country, Senator Marco Rubio of Florida has also used the Navy’s size to back his argument that under Obama the defense budget has been “gutted.”

“He’s more interested in funding Planned Parenthood than in funding the military,” he said Thursday night.

On Tuesday night during his annual State of the Union speech, Obama painted a very different picture of the status of the U.S. military.

“The United States of America is the most powerful nation on Earth, period,” he said. “We spend more on our military than the next eight nations combined. Our troops are the finest fighting force in the history of the world.”