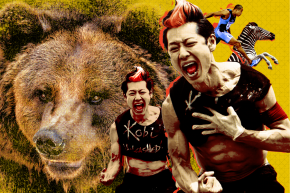 Orangutans, elephants and gold-medal winners all battled for species supremacy 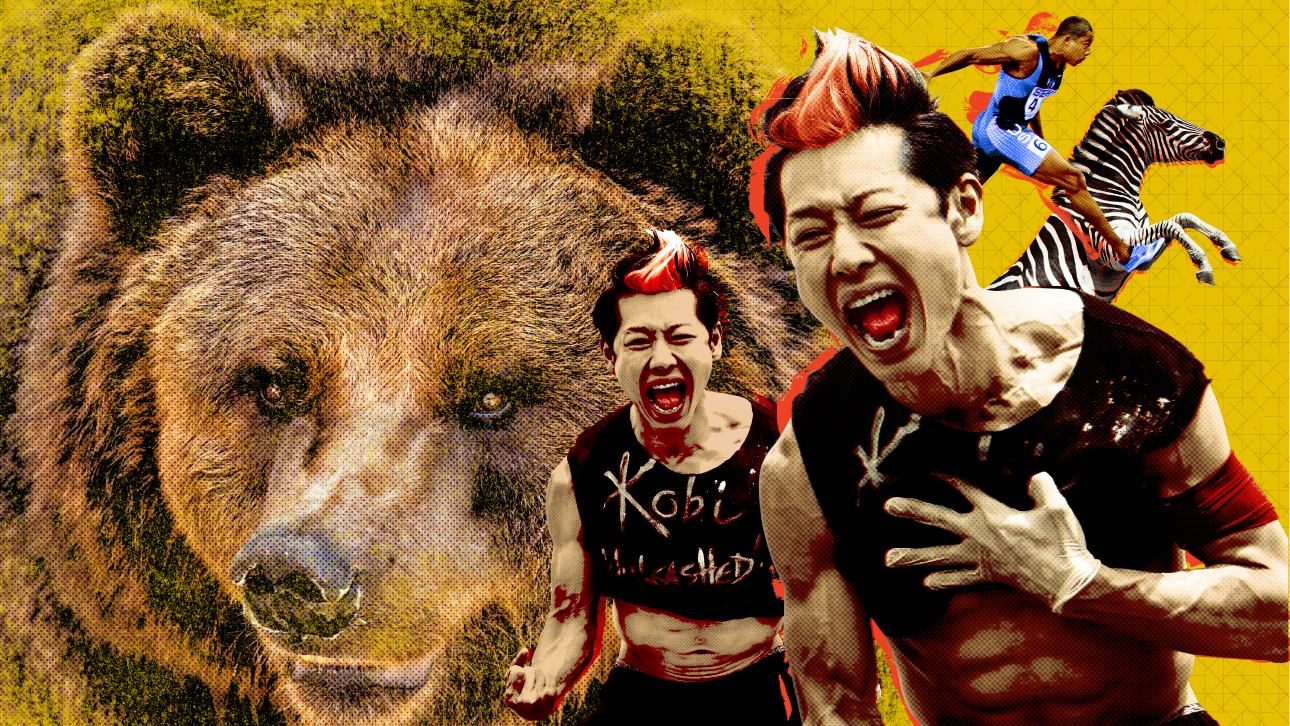 In late 2002—not long before he’d host a televised eating competition between a man and a brown bear—Steve Santagati was just another budding TV host looking for his big break. He loved being on camera, traveling the world, and being involved with unique programming, even if it was a tad off-color. His career had, theretofore, not taken him to stardom but the frigid terrain up north as the host of Fox’s “Looking for Love: Bachelorettes in Alaska.”

The series was a bomb—”The girls weren’t pretty enough and not interesting enough,” Santagati told Vocativ—but the job did introduce him to Eric Schotz, the head of LMNO Productions. He was producing a new special for Fox and wanted to know if Santagati was interested in hosting a show that was unlike anything his company—responsible for groundbreaking programming like “The World’s Funniest Pets” and “Miracle Babies II”—had ever concocted.

This was “Man vs. Beast,” a series of two specials that aired on Fox in January 2003 and February 2004. The first special celebrates its 13-year anniversary Friday. Both specials featured a series of what could best be described as creative athletic challenges that directly pitted one human (or select group of humans) against one animal. The prize? Species bragging rights and a moment of fame on network TV.

“I wanted the money,” Santagati said, “but also I thought it was going to be more of a wildlife thing, like in that genre of outdoor adventure.”

“Jack Hanna’s Animal Adventures” this was certainly not, but the show did become a cult moment in TV history. Where else would you find a Navy SEAL competing against a chimpanzee on an obstacle course? Or an Olympic sprinter facing off against a lumbering giraffe? Or Takeru Kobayashi, the competitive eating wunderkind, squaring off against a 1,089-pound Kodiak brown bear in a hot dog-eating contest, complete with Michael Buffer introduction?

The challenges were unlike anything seen in sports either then or now, and that’s all due to the imagination of Schotz and producer/head writer Bill Paolantonio, who would go on to produce a string of magnificently named specials that all sound like Troy McClure knock-offs: “That’s Gotta Hurt,” “Extreme Reunion,” and “101 Things Removed From the Human Body”—and that’s just for starters.

“I get there on set,” Santagati said, “and I distinctly remember this: Eric Schotz sitting beside me in the grandstand out in the middle of the Mojave Desert where we had that DC-10 plane that all the little people were pulling against an elephant, and he looks at me and says, ‘We’re going to hell for this.’ I was crying laughing.”

Renowned animal handler Jules Sylvester was brought in as co-host for the first go-round, while Sid Yost, also an experienced animal wrangler who’d spent years guesting on the TV show “Critter Gitters,” was the go-to handler for the follow-up. (Santagati was back as co-host, alongside gold medal-winning Olympians Carl Lewis and Bart Conner.)

Yost remembers kicking around ideas with the show’s producers and some ideas had to be nixed due to safety concerns—something involving an ostrich, Yost recalled—but most proposals went through as pitched and it was up to Yost to corral the needed animals through his contacts in Southern California. When he arrived for filming at various sets, what Yost experienced behind the scenes was a serious but relaxed group of commentators and competitors.

“Everyone had great attitudes,” Yost said. “They were all pumped up and they wanted to kick ass to beat the animal, for sure.”

Other contests in that original special also included a 363-pound sumo wrestler competing in a tug-of-war against a 180-pound orangutan as well as sprinter Shawn “Cheetah Man” Crawford racing against a zebra and a giraffe. Apparently, Crawford’s segment wasn’t filmed until after midnight, which may have led to an upset of sorts.

Santagati, meanwhile, always felt a tad more trepidatious about the circumstances than he was letting on. “Every second that I was on that shoots, I felt in danger,” he said. “Animals, even though they may be ‘trained,’ they’re unpredictable. You don’t know if you’re going to be wearing the wrong color or move your arms the wrong way and this thing is going to start going wild and tear you apart.”

No humans were mauled as a result of “Man vs. Beast,” but the reviews were pretty vicious. “Can TV viewers put their heads together and figure out how to demand better TV than this?” said the Philadelphia Enquirer. “Just when the other networks started to muscle in on Fox’s chokehold on moron television,” wrote Slate critic Robert Weintraub, “Rupert Murdoch’s boys gave us a little reminder last night of just who is king of lowbrow county.”

Not even a mid-January promotional push on Fox, with the NFL playoffs dominating the airwaves, couldn’t push “Man vs. Beast” past a measly 3.4 rating. (A re-air eight days later got less than half that number.)

Nonetheless, Fox brought the gang back together the following February for a sequel. This time, the competitions featured a long-jump contest between Bryan Clay (who would win the 2008 gold medal in the decathlon) against a black labrador and then-Stanford gymnast Marshall Erwin, who had just won a NCAA national championship on the rings, faced off against an orangutan to see who could dead-hang the longest. The beast, in an unforeseen development, soon started peeing himself and was eventually DQ’d for a blatant rules violation. There was also a race up a 40-foot-high palm tree between champion climber Kap Teo-Tafiti and a 95-pound chimp. And finally, a 330-yard relay race between a camel and four little people.

“Back then, there was more money and the TV audience wasn’t fragmented the way it is today,” Santagati said, “so if something was good, they would go out there and put the money into it and go do it again. They weren’t chickenshit like they are today.”

The critics again were none too kind. “Another sign of the impending apocalypse,” raved the Ottawa Citizen. “That there was a first one is comical enough,” wrote the Arizona Republic. “That there is a sequel is either further proof of the decline and fall of American television or visionary genius, depending on how many people watch.”

Not enough people did watch and Fox never again formally pitted man against beast. The network re-aired both specials one final time back-to-back in August 2004 to fill the scheduling block opposite the Summer Olympics on NBC, but that was that. At least a couple of million people tuned in, but in Santagati’s view, “It was the end of an era.”

“The world has become uncomfortably and unproductively politically correct,” Santagati adds. “Now, reality is so coached and contrived, but ‘Man vs. Beast,’ all they could really do was set up the event and see what happened. You can’t coach a zebra. You can’t tell an orangutan not to pull your arms off. It was very organic. It was really cool.”

In a modern-day version, Santagati would love to see, say, a UFC fighter go up against a boa constrictor and see if he could break the reptile’s hold (and also not, you know, get swallowed). And while Santagati openly laments the bygone era that produced such classic TV, Yost doesn’t sound like someone who’d necessarily do it again if given the chance.

“Would I consider doing something like that again? Probably not, only because I do so many other things now. Besides, I’m semi-retired.

“But if they could figure out enough new contests,” he added, softening his stance just a bit, “that could be another great two-hour special. That would really take some creative thinking, but like some other shows, its time may have come and gone.”