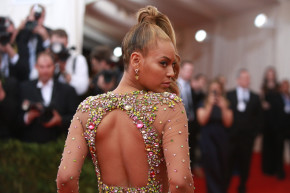 The Secret To Beyoncé’s Buzz
By Leslie Horn

The Secret To Beyoncé’s Buzz

Beyoncé appeared as if out of left field on Lip Sync Battle Thursday night to perform alongside Channing Tatum for a borderline-disturbing version of “Run The World (Girls).” Co-hosts of the show, Jenna Dewan Tatum and Christine Teigen feigned shock. But nothing about her appearance was random.

Around the same time, Pepsi confirmed that Bey would join Coldplay and Bruno Mars to perform at halftime at the Super Bowl. The Twitter hive mind and Mrs. Carter devotees cheered at the surprise addition. But Beyoncé’s latest moves are hardly spontaneous. The times she makes news are just as much a part of her strategy as the times she doesn’t.

In fact, lately, more has been said about Beyoncé’s recent silence, which started sometime back in 2013 and has continued to the present day, than anything she’s had to say. She doesn’t say much at all anymore, aside from periodic statements issued via handlers or pre-recorded interviews. Often, it’s what she does that reveals whole lot more. In August, the New York Times pointed out the significance of the fact that Beyoncé’s cover of the Vogue September issue did not include an interview at all:

A review of five years’ worth of cover articles indicates that she is the only celebrity cover star not to submit to some type of interview (and on the occasion of her two previous Vogue covers, in 2009 and in 2013, she did). When models appear on the cover, as in the case of last September’s issue, they typically do not get the same profile treatment, but even the “Instagirls” of September 2014 — Cara Delevingne, Karlie Kloss, et al. — answered a few questions online. Not only did Michelle Obama agree to an interview when she appeared on the cover in 2013, she even brought along her husband. It may be unusual for Vogue, whose representatives declined to comment, but it is no longer unusual for Beyoncé. At some imperceptible point around 2013 to 2014, she appears to have stopped giving face-to-face interviews. A member of her team told a reporter in May that despite numerous appearances, she had not answered a direct question in more than a year.

This is all part of her strategy. Beyoncé had a relatively quiet 2015 (for Beyoncé). No new album, no big tour, some notable performances, standard fare appearances, etc. We looked to Google for insights into how people follow Beyoncé. Her sole significant spike in Google News searches was back in February, coinciding with her Grammy’s performances, which included a tribute to Stevie Wonder and a gospel song to close out the whole show. People tune in because she always delivers. A big event like the Grammy’s is a guaranteed Beyoncé home run. To that end, historically, her biggest Google spikes have been the moments over which she has most control: when she announced she was pregnant in August 2011 at the VMAs; when she released her surprise album; or when she performed at the VMAs in 2014. The only exception to this is the infamous elevator altercation between Beyonce’s sister Solange and Jay Z in May 2014. .

In 2015 she had smaller Google spikes for normal (for Beyoncé) events. Like when she released the video for “Feelin’ Myself” with Nicki Minaj in May. Or when she performed said song with Nicki in October at the Tidal X show. Plus there was her appearance at Made In America Fest in September.

Her name got another uptick when she and and her family of three sported Coming to America-themed costumes for Halloween. Because there’s not an overload of news regarding the biggest American pop star, people pay attention. She sates people’s appetites for big performances with a smattering of photos, appearances, and the occasional appearance on a Drake song or in a Tidal exclusive. The little spikes in Google activity are the interludes. But there’s always the possibility of something bigger and better coming down the road.

The last major interviews she gave was for her GQ cover in 2013. But that has by no means had any kind of negative effect on her popularity. In fact, Beyoncé is as popular as ever. Last month, sales of her debut album, Dangerously In Love surpassed five million in sales. That’s a 12-year-old album. So while the public cares each time Beyoncé appears, it’s worth pointing out that it’s careful and deliberate.

Which brings us back to last night’s Lip Sync Battle appearance and subsequent Super Bowl announcement. The timing is not coincidental. Nothing in the Beyoncé world is, and she knows exactly how to drum up buzz, so if two major announcements happen at once, why not? IN 2013, two weeks after the Beyoncé Super Bowl, HBO premiered Life Is But A Dream, the documentary that was directed by Beyoncé, produced by Beyoncé, and of course about Beyoncé. That year was a whole lot of buildup, too. It was marked by several rumors (and circumstantial Soundcloud evidence) that she was working on something. But she didn’t respond. She made people wait. And 10 months later, she dropped her surprise self-titled fifth album. People freaked out. She let people speculate. And why not do a little speculating ourselves now? Maybe a Beyoncé Bowl means another album is coming. Rumor is, she’s been in New Orleans working on a music video. Maybe she’s going to break the mold all over again. Or maybe that’s just what she wants you to think.