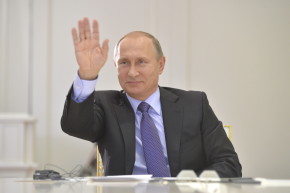 Putin To Crimea: Do You Want Electricity Or Ukraine?
By Sarah Kaufman

Putin To Crimea: Do You Want Electricity Or Ukraine?

Putin released a poll to the peninsula Russia annexed from Ukraine, essentially asking them to choose between Ukraine or having lights

Vladimir Putin has a question for the people of Crimea, the territory he annexed from Ukraine last year: Would you rather be part of Ukraine or have electricity?

The public survey distributed Thursday to hundreds of Crimeans came on the same day a quarter of Crimea lost electricity after Ukraine switched off power supplies to the peninsula, Reuters reports. Ukraine supplied Crimea with 70 percent of its electricity before the annexation.

The survey first asks Crimeans if they support ending the peninsula’s electricity contract with Ukraine upon the year’s end, and that question is followed up with whether they’re prepared to endure electricity outages, Russia’s energy minister Alexander Novak announced Thursday. The poll may be a way for Putin to try to show that Crimeans support being a part of Russia—not Ukraine—assuming people care less about lines on a map than they do about having working lights in their homes. It could also be a way to pressure Ukraine into conceding Crimea was always a part of Russia.

Russia annexed Crimea from Ukraine in March 2014, which the current Ukrainian regime and pro-Ukrainian activists in Crimea protested. Unknown people knocked down Crimean power lines in November, causing a major outage and a state of emergency in the peninsula. After the outage, Russia started supplying Crimea with more electricity in the form of generators.

Experts have said Russia will take years to build the infrastructure necessary to provide enough electricity to Crimeans, but several polls after Russia’s annexation showed the majority of Crimeans support being a part of Russia.