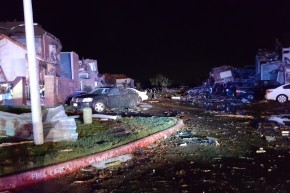 Saving People And Puppies Caught In The Texas Storms

A series of tornadoes tore through the Dallas area Saturday, killing at least 11 people and demolishing hundreds of homes and buildings. Amid the emergency crews and residents working to help rescue efforts is Krissy Heishman, an amateur storm chaser who’s been on the scene, assisting and filming.

“I have never seen anything like this in my life, like I had seen tonight,” Heishman told Vocativ via Facebook messenger. Heishman, an engineering student at the University of Texas at Arlington, was south of the Dallas suburb of Garland when a tornado the strength of an EF3 hit, according to the National Weather Service. No deaths or missing persons in Rowlett were reported on Sunday, but 23 people in the town were injured, according to City Manager Brian Funderburk. An EF4 tornado hit Garland at approximately 6:45 PM, killing eight people and injuring 15, Garland Police Lt. Pedro Barineau said.

“Power lines were everywhere,” Heishman said, describing the scene after the tornado hit Garland. She quickly went to help. “I may not be able to lift super heavy objects, but I can at least help organize folks and make sure they are watching out for nails, falling glass, typical hazards people may not consider in a panic,” she said.

Devastating damage left by a tornado on Saturday.

In Heishman’s experience of storm chasing, most people in a natural disaster either react in shock or in “full-on rescue hero” mode, Heishman said. On Saturday, she saw neighbors in the Dallas area working together “like a machine” to dig people out of rubble. They were able to recover a woman who was “basically unharmed” from the shattered remains of an apartment building. Heishman witnessed “dozens of lights, all from cell phones,” coming from people trying to locate missing loved ones.

Right near the eye of the Rowlett EF3 tornado, Heishman saw a couple she said looked to be in shock, carrying a puppy. They told her they were missing the puppy’s litter mate.

A couple searching for a missing puppy.

“They thought it was gone for sure,” she told Vocativ. After the couple left the scene, a girl found the missing puppy and gave it to Heishman, who is still searching for the couple. “I figured if I could do anything, I could give them a little hope,” Heishman said about the couple. “Give them back their pup. So sad.”

Krissy with the rescued pup.

When asked whether seeing the extent of the tornadoes’ destruction would keep her from chasing storms in the future, Heishman said she would “definitely” keep going, but she would need a few months to recover from the stress, something she does often, she said.

The storm system that created the deadly tornadoes in the Dallas metropolitan area is expected to spawn snow storms and leave 16 inches of snow in west Texas on Sunday evening, the National Weather Service reported. Much of the Dallas area was also hit with flash flooding over the weekend.