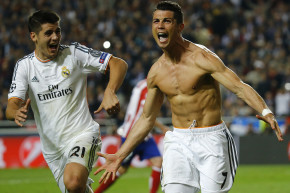 “The door that God opens, nobody closes,” wrote a relieved Murilo de Almeida on Facebook in the final hours of September. The transfer window for the Hong Kong Premier League was sliding shut and, after much anguish, missing paperwork needed to get his new deal through had reappeared. It was a close call. “God’ll show one more time, and with me everything [is great] right now.”

A link to a news report followed. Written in Chinese, it talks up the new deal and features photos of Murilo shaking hands with senior members of his new club and video of him training with his new teammates. The article is dated September 25th.

Under normal circumstances, you might think nothing of it. But this is the world of dubious—and sometimes fraudulent—Southeast Asian soccer data, and no country’s data seems more bizarre and labyrinthine than East Timor’s.

East Timor is a former Portuguese colony just north of Australia, and the site of a brutal occupation by Indonesia from the mid 1970s to the turn of the century. Despite their shared colonial link, connections between East Timor and Brazil are weak and there is little history of migration between the two nations. The 2015 CIA World Factbook doesn’t even list Brazilian as an ethnic group present in East Timor.

Which is what made it so curious when de Almeida and five other Brazilians lined up for the East Timorese at the Southeast Asian Games in November of 2011. In the years that followed, there were more Brazilians to come. Various soccer databases show as many as 20 Brazilian players now holding East Timorese citizenship. Some have never even played for the country’s national team.

Having an Asian passport gives players easier access to club contracts in the lucrative leagues of Asia. These leagues generally cap the number of foreign players a club can have. However, extra spots are available for players with Asian citizenship, so perhaps it is not a coincidence that many of East Timor’s Brazilians began playing in countries like Thailand, the United Arab Emirates and Indonesia around the same time as they switched national allegiances.

The financial motivations are obvious as the World Bank found that most soccer players in Brazil earn less than $650 a month. Some Asian clubs, by contrast, are spending big to attract international stars such as Alessandro Del Piero, Didier Drogba, Xavi, Tim Cahill and Asamoah Gyan.

There is prestige in having a Brazilian player on the books, and while the big names of the Brazilian national team tend to sign with European clubs, there are journeymen in Asia making a solid living. Around two dozen Brazilians are playing in China alone. Their numbers eclipse all other foreign nationalities.

De Almeida is one such player. He has pinballed across the continent since picking up his new passport. Just where he has played, though, is open to debate. In a region where few countries even share the same alphabet, accurate soccer data can be hard to find. Even clubs—which are frequently under-resourced—sometimes have to turn to Wikipedia to find out more about potential signees.

Wikipedia tracks all the changes that are made to a page and the edit history of de Almeida’s page makes for interesting reading. Shortly after starring at the 2011 Southeast Asian Games, a Wikipedia user named SolTimor created a page for him. Information was scarce, but the striker was listed as playing for América-AL, a small club in Brazil’s northeast. Their stadium is listed as having a capacity of just 1,000 people.

A few months later, a Wikipedia user named Andy4190 changed his club to Esporte Clube Bahia, one of Brazil’s top flight teams. In the years that followed, Andy4190 and other users bulked up de Almeida’s CV further: his goal tally went through the roof, a recent championship was claimed, guest stints and loan deals popped up, often during transfer windows, and rarely with evidence provided—such as a transfer list, press release or article—to support the claim. At one point, a club that does not even exist was added to de Almeida’s playing history.

A similar pattern of edits emerges on the pages of many of his national teammates. In the case of goalkeeper Emerson Cesario, a good 14 centimeters was even added to his height.

So who would waste their time making all these edits? Sock puppets: fake online identities which are used by scammers, often as a way of spreading misinformation and then giving it credibility.

A 2011 investigation by Wikipedia administrators found a ring of sock puppets which, it claims, were operating on behalf of the Malaysian national soccer team. One of its members was SolTimor, the user who created de Almeida’s page.

SolTimor was subsequently found to be an alias of Andy4190. He is now banned from Wikipedia, though he appears to be operating under new aliases and also operating an influential blog that is packed with fraudulent information.

There are allegations that East Timor takes a cut from selling Brazilians to Asian clubs. Jesse Pinto, former captain of the East Timorese national team, told ABC Australia that, based on his experience, “If they are organizing Brazilians to get these clubs, and get them a trial [then] they would be getting a cut.” Perhaps that explains all this sockpuppetry.

“Team info will of course affect pricing, so that could be one reason [for the edits],” Jake Marsh of the International Centre for Sport Security says via Twitter.

Misinformation released on Wikipedia can spread throughout the soccer community with ease. For example, a fake team crest posted on Wikipedia has found its way into the Opta database, the premier database for soccer, and from there it has spread to sites like Soccerway and Goal. It is the most blatant example of how data scouts skim Wikipedia for information in a region where reliable sources of data can be hard to find.

“Scouting databases do exist,” Marsh says, referencing FIFA’s Transfer Matching System. “So the market is more transparent, but it would surprise you on what basis some clubs sign players!”

In 2012, for example, Australia’s Adelaide United announced it was trialing a player from Florida whose CV was later described as being “fictional.” It included stints with Ajax, Valencia, River Plate and the US youth team. He turned out to be a local DJ.

It’s usually players on the short end of such scams, however. Fake agents approaching third world players via Facebook and LinkedIn and then enticing significant payments from them is “rife,” Marsh says.

“What it does indicate is the importance of data and rise of cybercrime when discussing sport corruption/fraud,” says Marsh, who also believes sites like Transfermarkt and Sofascore may be the targets of soccer data hackers. “It won’t just be Wiki being manipulated.”

Intriguingly, it appears no dubious edits have been made to the pages of in-demand East Timorese Brazilian players like Patrick Fabiano, an in-demand striker based in Kuwait. The same goes Tiago Cunha, a player who has made a living in Asia for many years and is listed as having dual nationality. Perhaps there is nothing to be gained by doing so.

While none of this definitively proves anything wrong is happening in East Timor, it certainly does lend weight to allegations that its Portuguese connection is being used as a way of funneling Brazilian players into Asia, with the potential to profit from selling those players to rich clubs after the fact.

Just how deep the rabbit hole goes is anyone’s guess, but one thing is for certain: you won’t be seeing De Almeida lining up for East Timor again. The country’s all-time leading scorer has had a falling out with his adopted country. The rift is so deep that he took the matter to FIFA and no longer accepts East Timor’s invitations to play—not even with a spot in the World Cup up for grabs.

The exact nature of that complaint is just another mystery in the world of East Timorese soccer.