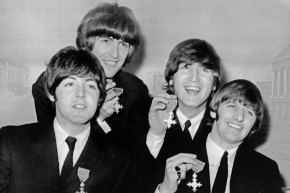 By The Numbers: The Beatles Join The Streaming World
By Sarah Kaufman

By The Numbers: The Beatles Join The Streaming World

The Beatles will officially join the streaming world at midnight Thursday, just in time for Christmas, ending a conspicuous hold-out from the one of the most popular bands in the world.

Nine music streaming services including Spotify and Apple Music will be able to play the Fab Four’s music catalogue for the first time at 12:01 AM local time Christmas day, according to the band’s official Twitter account. Previously, just a small collection of singles by the band were available for streaming.

The band’s website has a hashtag #thebeatlesstreaming for fans to use to follow along live with the first moments the music is available to stream in each country around the world.

December 24 at 12:01am local time, The Beatles’ music is available for streaming worldwide: https://t.co/99cigizLza pic.twitter.com/42vZSNGVHG

The deal makes 224 of their songs from the original 13 studio albums and other “essential” collections available, and in Spotify’s case, not just to members with monthly premium subscriptions, the BBC reported. So plan a 10-hour listening party to get through it all.

On Wednesday, before the band’s music became available to stream, it had over 1 million followers on its Spotify page. One of the only singles available on Spotify, “Ain’t She Sweet,” garnered over 5.7 million streams. That’s not quite as many streams as it seems, though, if you consider the number one streamed song on Spotify, Justin Bieber’s “Sorry,” which was streamed 27 million times last week.

When the Beatles’ music became available for download on iTunes, the band got 450,000 album and 2 million single downloads in just the first week. By the end of the first day, all 17 albums were in the top 100 and 15 had cracked the top 50 on iTunes.

The Beatles waited until streaming proved itself pretty much impossible to ignore. Streaming boomed this year while digital and album sales dropped. From August 2014 to August 2015, total on-demand streams on all streaming services hit 191.4 billion, a 100 percent increase from the same time frame the year before, when the total hit 95.8 billion streams, according to Billboard numbers.