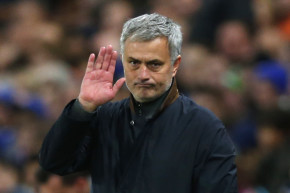 Whoever should shoulder responsibility for Chelsea’s piping hot mess of a season, manager Jose Mourinho is gone just a half-season after winning the English Premier League title.

But how did it get to this? In retrospect, the decline which resulted in Mourinho’s departure from Stamford Bridge on Thursday afternoon was set on course some time ago—well before anyone could have spotted the point of no return. In fact, Chelsea’s problems this season can be traced all the way back to the summer transfer window.

Whilst the Blues’ inactivity in the market was deemed, at the time, the mark of a stable side, Mourinho viewed it a missed opportunity to strengthen from a position of power. A center-back was his priority, with Everton’s John Stones quite publicly identified as the ideal candidate to replace John Terry as the lion-hearted pulse of the Chelsea defense.

However, Stones remained at Goodison Park, despite Mourinho’s pleas with his own club to sanction the deal, and Ghanaian left-back Baba Rahman was signed as a cut-price alternative. Mourinho then went Mourinho by unloading on his own players—and worse still his young players, with Ruben Loftus-Cheek blamed for an “unacceptable” performance in a Sydney pre-season match.

Then there was the frankly deplorable touchline spat with club doctor Eva Carneiro, and subsequent legal wrangle over her dismissal. Of all the dismal results Mourinho has endured this season, not one episode painted him in as poor a light as this one.

Still, the 3-0 home defeat to Manchester City illustrated just how far off the pace Chelsea were just two weeks into the new season, despite Mourinho describing the defeat as a “fake result.” Subsequent losses to Crystal Palace, Everton and Porto spun the spiral which would soon consume Mourinho. By then, Mourinho appeared to have lost the backing of his players as rumors spread of mass discontent inside the locker room.

But as concerning as the results were, nothing quite exemplified the anarchy taking hold at Stamford Bridge like Mourinho’s public performances. Of course, the so-called “Special One” has always been something of a media maverick, but his press persona has been as incoherent and scattered as ever this season. He was a man on the brink of a breakdown almost every time he stepped in front of a camera.

“I don’t run away,” he told Sky Sports after a home defeat to Southampton at the start of October. “If the club wants to sack me they have to sack me because I’m not running away from my responsibilities or my team.” He then went on to rant for a full seven minutes, blaming referees for his side’s struggles, an act for which he was fined £50,000 and hit with a one-game stadium ban.

This came just a few weeks after a bizarre outburst aimed at his Chelsea predecessor and regular foil Rafael Benitez, in which he mocked the Spaniard’s waistline in comments made to the Real Madrid manager’s wife. “I think she needs to occupy her time, and if she takes care of her husband’s diet she will have less time to speak about me,” he jibed, not exactly easing the accusations of sexism lobbed his way following the Carneiro controversy.

In almost every possible way, the past few months have been a catastrophe for Mourinho, but it’s difficult to pinpoint a definitive nadir of the campaign. However, no result was quite as damaging as the 2-1 defeat to West Ham United in late October. It was at Upton Park that Chelsea’s spirit as a club and a team snapped, with both Mourinho and Nemanja Matic sent off. Slumped at the back of a director’s box packed with jubilant opposition fans, the Blues boss was a broken man in charge of a broken side.

Monday’s defeat to Leicester City, though, was the last blow Mourinho could absorb. “I feel my work was betrayed,” he said afterwards. Upon his dismissal, Chelsea technical director Michael Emenalo said “The results are not good. There obviously seemed to be a palpable discord between manager and players.”

While that was the first public salvo aimed at Mourinho from within, it had been open season on him long before his exit from Stamford Bridge—even Will Ferrell was trolling the Chelsea boss—and the last six months or so will weigh heavily on the minds of whichever club chooses to offer him a route back into the sport.

Pragmatists will counter that Mourinho could never have prepared for the sharp decline of so many key players—namely Cesc Fabregas, Diego Costa, Eden Hazard and Matic—but pessimists would be right to point out that their decline could be a product of Mourinho going off the rails. He is, after all, a notorious control freak who seems incapable of letting anything go. He perhaps should have let go of Chelsea long before he actually did.