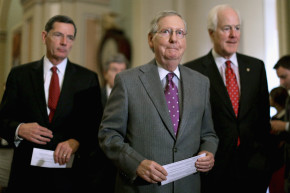 The language is written so it will never have to face ratification by the U.S. Senate

Representatives of 195 countries approved a landmark agreement on how to reduce carbon emissions at the Paris climate change talks—although the agreement has parts that are not legally binding.

At least one of the reasons the agreement won’t be legally binding is because of U.S. Senate Republicans. So how does a political party that holds a majority in one legislative body in one country end up having that much influence?

More These Countries Are Not Prepared For Climate Change

For starters, any treaty the U.S. participates has to be ratified by the U.S. Senate. The 1997 Kyoto Protocol was legally binding and ambitious in scope, but it had to be ratified by the U.S. Senate to be law in the U.S. The U.S. had already passed a resolution (at 95-0, no less) that would not require the U.S. to any international agreement that did not require developing countries to make the same promises when it came to emission reductions. The Clinton administration signed the Kyoto Protocol, but it never made it the U.S. Senate for a vote (since it never would have passed the Republican-controlled Senate, which was in the process of impeaching President Clinton).

Natural gas and nuclear have done the most to provide clean energy: https://t.co/nVuBzfCflJ

So, with the 2016 election coming up, Republican senators are going to have to make sure they are getting the votes. Many in the Republican party deny climate change exists, and many elected officials are backed by big companies that have stake in keeping carbon emissions. Further, Republicans in districts that really hate President Obama very likely feel they can political points by denying—loudly—any achievement by Obama.

Republicans have already vowed to stop Obama and prevent the first of the $3 billion payments to reducing carbon emissions.

As a result, the final draft of the agreement has portions that are voluntary and portions that are legally binding, specifically to avoid any ratification by the U.S. Senate, according to The New York Times. After the announcement of a draft agreement on Saturday morning, the Twitter didn’t record many comments so far from U.S. senators.